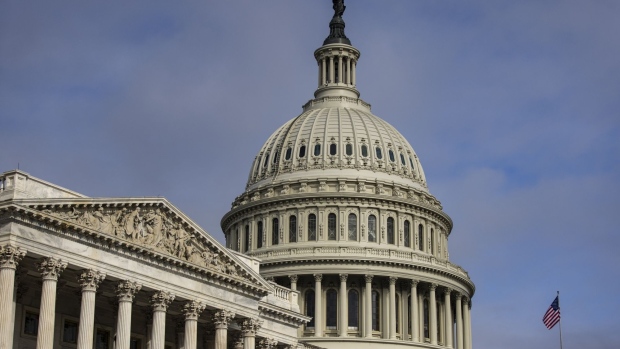 The U.S. Capitol building in Washington, D.C., U.S., on Wednesday, March 17, 2021. President Biden's next major economic package will almost certainly have to rely once again on a Democrat-only approach after Senate Minority Leader McConnell shut the door on Republican support for tax hikes to pay for it. Photographer: Samuel Corum/Bloomberg , Bloomberg

(Bloomberg) -- The chief executive officers of the largest U.S. banks, including JPMorgan Chase & Co. and Goldman Sachs Group Inc., are being called to Capitol Hill to testify before lawmakers next month.

The Senate Banking Committee and House Financial Services Committee scheduled hearings on May 26 and 27, respectively, to question the chiefs of six major banks, also including Bank of America Corp., Citigroup Inc., Wells Fargo & Co. and Morgan Stanley. The group of CEOs, who have appeared on Capitol Hill a few times since the 2008 financial crisis, were expecting the invitations.

The hearings have been organized by congressional Democrats, including Chairman Sherrod Brown on the Senate panel and Chairman Maxine Waters on the House side, who are strong critics of Wall Street. The announcement didn’t indicate the topics they’ll choose to raise next month.

In a hearing in 2019, seven bank CEOs were grilled for hours under often tense questioning from Democrats.