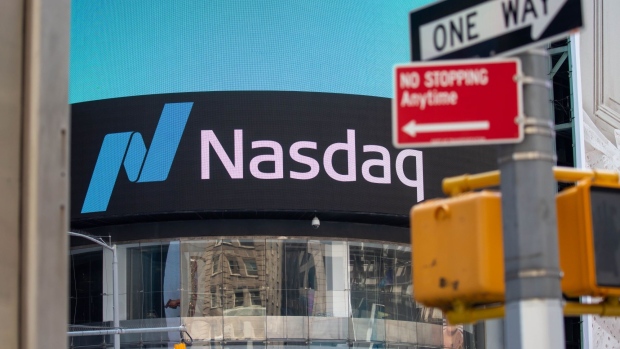 Signage is displayed outside the Nasdaq MarketSite in the Times Square neighborhood of New York, U.S., on Monday, July 20, 2020. , Michael Nagle/Bloomberg

As 2021 approaches, many on Wall Street are bracing for unfamiliar territory: A year when technology companies may not be the biggest stars of the stock market.

The Nasdaq 100 Index is on track for its best year in more than a decade with a 43 per cent advance so far in 2020, led by companies with triple-digit gains and eye-watering valuations like Zoom Video Communications Inc. and DocuSign Inc. That’s raising speculation that the rally may fizzle at least for a while in 2021, when the group’s earnings growth is projected to lag behind less-expensive sectors like industrials.

“It’s a matter of what’s the more attractive portion of the market,” said Michael O’Rourke, chief market strategist at JonesTrading. “Are you going to pay 40 or 50 times sales or buy something cheaper and wait for the business to normalize?”

Over the past few months, investors have already taken a shine to the latter group as they prepare for a post-pandemic world in 2021. Value, cyclical and small-cap stocks are surging thanks in part to a series of successful vaccine trials that have sent more economically sensitive sectors like energy and financials soaring. Despite notching a record last week, the Nasdaq 100 has done little since its previous high on Sept. 2. Meanwhile, the S&P 500 Pure Value Index is up 16 per cent and the Russell 2000 Index of small-cap companies has gained 20 per cent over the same stretch.

Ironically, from an earnings-growth standpoint, value stocks in the S&P 500 are where the best expansion is expected, with profits forecast to expand 46 per cent next year -- more than twice the rate of growth stocks, according to data compiled by Bloomberg Intelligence. Companies in the benchmark index’s technology group are projected to see profits rise by 16 per cent.

Last week, JPMorgan Chase & Co. downgraded some of the hottest software stocks, saying investors would be better served by gaining exposure to companies that are more sensitive to broad economic growth ahead of an anticipated expansion later in 2021. The bank did raise ratings to overweight on several technology companies, including Autodesk Inc. and Altair Engineering Inc., that fit that profile.

Among those downgraded to neutral from overweight were cybersecurity companies Crowdstrike Holdings Inc. and Cloudflare Inc. Both have more than tripled this year.

“An expanding economy could cause sector rotation and potential performance headwinds for these types of stocks,” analyst Sterling Auty wrote in a research note.

The rally in technology stocks over the summer was fueled in part by stellar second-quarter earnings relative to other sectors, a performance that wasn’t matched in the third quarter, according to Sean Darby, chief equity strategist at Jefferies. As the recovery accelerates next year, there’s a greater chance that investors will abandon 2020’s biggest winners in favor of cheaper stocks with greater potential upside, Darby wrote in a note last week. He cut the outlook on technology stocks to “modestly bearish.”

Investors, of course, have made fortunes buying weakness in technology and internet shares over the past decade and many see no reason to change their playbooks to favor stocks whose earnings growth may not be so spectacular once their businesses recover from the pandemic.

Those concerned about valuations are underestimating the growth potential of the best technology companies like Apple Inc. and Microsoft Corp., argues Wedbush analyst Daniel Ives. This year’s trends that benefited from the pandemic -- like e-commerce, cloud and cyber-security -- aren’t going away, he says.

“The winners and the secular growth stories, these are names that will continue to move higher as they grow into their valuation,” he said. “I think the Street is still under-estimating where these growth stories could go in the next two to three years.”

Wall Street analysts are nearly universally bullish on the biggest technology and Internet companies. Of the big five -- Amazon.com Inc., Apple, Facebook Inc., Alphabet Inc. and Microsoft -- only Apple has fewer than 80% buy ratings, according to Bloomberg data. Of the 56 analysts covering Amazon, 54 have the equivalent of buy ratings, the highest percentage in more than a year.

Ignore technology stocks at your own peril, says Needham analyst Laura Martin. The megacap group is poised to outperform again next year in part due to their scale and the “winner-take-all” nature of most of the markets they compete in, she said in an interview. Facebook and Alphabet are her top picks on expectations for growth in the market for digital advertising as budgets expand.

Even though the first part of the year is likely to be dominated by the re-opening trade, technology stocks are poised to regain market leadership as the economic recovery matures, according to Jason Benowitz, senior portfolio manager with Roosevelt Investment Group.

“Many of the same characteristics of the last cycle that benefited technology will persist into the next one,” he said, citing low interest rates and slower economic growth. “Once the reopening boost has faded, people will go back to the secular growth of technology.”