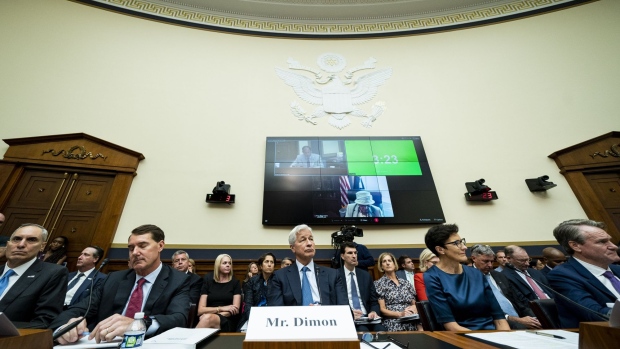 (Bloomberg) -- Citigroup Inc.’s Jane Fraser was forced to answer if her bank would pull business from China if its military invaded Taiwan. Jamie Dimon was pressed on whether JPMorgan Chase & Co. would cut ties with Russian firms.

Lawmakers seized on recent political tensions and hot-button social issues in a hearing with the chief executive officers of America’s largest retail banks on Wednesday. Representatives on the House Financial Services Committee probed them on everything from the escalation of the Ukraine conflict and racial equity to fossil-fuel financing and their role in slavery.

“Of course there are concerns, there are disagreements, but that’s how democracy works,” Maxine Waters, the California Democrat who chairs the committee, said during the 6 1/2-hour hearing. “We have a lot of work that we must continue as we interact with each other to do the people’s business.”

The breadth of questions served as a reminder of the expansive reach of megabanks, as Waters called them. They also come as the US economy faces a precarious position, with inflation running at decade highs raising the specter of recession. The chief executives were forced to discuss their firms’ approach to helping consumers deal with soaring prices and rising US recession risks.

Dimon, CEO of the biggest US bank, said consumers are in great shape now but acknowledged there’s a chance of a mild recession, which geopolitical events could exacerbate.

Brian Moynihan, Bank of America Corp.’s CEO, said consumers have more money in their accounts than ever, but acknowledged that inflation and unemployment are working against them. The CEOs’ comments came shortly before the Fed raised interest rates by 75 basis points for the third consecutive time on Wednesday afternoon, and forecast they would reach 4.6% in 2023.

The executives faced tough questions about their ambitions in China with lawmakers asking about reports of human rights abuses there and concerns over its approach to Taiwan. Representative Blaine Luetkemeyer of Missouri asked bank executives if an invasion of the island would prompt them to withdraw business from China.

Citigroup’s Fraser answered in line with other banks-- that she would seek US government guidance before making a move. But Luetkemeyer wanted to know what she would do if the government said Citigroup could respond how it wanted. “It’s a hypothetical question, but it’s highly likely that we would have a materially reduced presence if any at all in the country,” Fraser said.

Brad Sherman, a Democrat from California, asked for  “yes or no” answers when he pressed banks on their ties with Russian companies. Dimon’s answer -- he said the bank is following instructions from the US government -- drew a rebuke from the lawmaker.

In another exchange, the CEOs were asked by Al Green, a Democrat from Texas, to raise their hands if a person of color would head their respective banks within a decade. Only one hand went up -- Truist Financial Corp. Chief Executive Officer Bill Rogers Jr.

Democrats also tried to extract pledges from the banks to eliminate overdraft fees by 2025, while Republicans pressed executives to commit to continuing with their financing of fossil fuels.

Notably, Goldman Sachs Group Inc.’s David Solomon and Morgan Stanley’s James Gorman, two of the biggest names on Wall Street, were not present at the hearing as neither bank has large consumer operations.

Democratic and GOP lawmakers have been sparring for months over the role that lenders and Washington financial regulators should play in broader social issues. President Joe Biden’s picks to serve as the Fed’s vice chair for supervision have faced tough questions from Republican lawmakers over the role that regulators should play in fighting climate change, for instance.

Executives are set to testify before the Senate Thursday, and members of that chamber have dropped some indications as to what questions they plan to raise.

Senator Mark Warner, a Virginia Democrat, said in an interview prior to Wednesday’s hearing that he’s interested in hearing the bank executives perspective on the non-bank and fintech sector, which has eclipsed banks in some activities, including mortgage origination.

“I imagine their views with be shaded more pro-bank obviously, but there is a kind of regulatory structure question around the non-bank sector,” he said. “I have some questions about what they’re doing in terms of consumer products, particularly if we are going into this higher interest rate level. I think we are going to have huge challenges still around housing.”

Senator Elizabeth Warren, a Massachusetts Democrat, was a bit more coy on what she’d like to learn from the hearing: “You’ll find out on Thursday.”