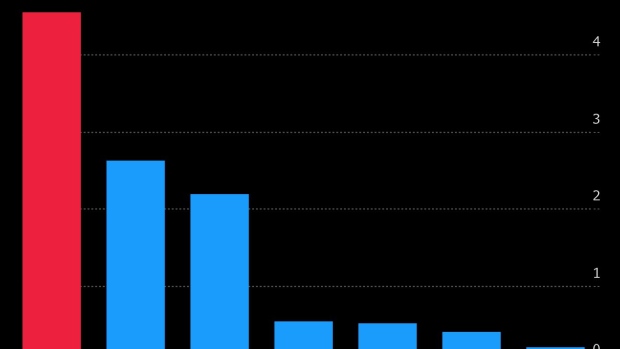 The Kingdom Tower, operated by Kingdom Holding Co., centre, stands on the skyline above the King Fahd highway in Riyadh, Saudi Arabia, on Monday, Nov. 28, 2016. Saudi Arabia and the emirate of Abu Dhabi plan to more than double their production of petrochemicals to cash in on growing demand. , Bloomberg

(Bloomberg) -- The latest crop of Saudi Arabia’s market newcomers is proving just as frugal when it comes to paying investment bankers.

Despite attracting $125 billion in orders from investors for an initial public offering of Saudi Telecom Co.’s internet-services unit, banks including Morgan Stanley and HSBC Holdings Plc are set to share just about $12 million in fees, Arabian Internet and Communications Services Co., also known as solutions by stc, said in its prospectus.

That’s just 1.3% of the offering value, compared with an average of about 5% or more for IPOs in the U.S. or Europe. Morgan Stanley alone had a bigger payday during UiPath Inc.’s $1.54 billion IPO in April, which generated a total of $67 million in fees.

The Saudi deal’s pot also gets split between a local bank, auditors and legal advisers -- and will even be used to cover the cost of printing the prospectus.

IPO riches have yet to materialize for global banks despite a bonanza of share sales this year. Wall Street heavyweights like JPMorgan Chase & Co., Goldman Sachs Group Inc. and Citigroup Inc. have still flocked to the kingdom, hiring teams on the ground and sending in their top executives to sway local officials in the hope of winning advisory roles.

The financial rewards were meager even in the case of Saudi Aramco’s record offering in 2019, which raised almost $30 billion but paid out just over $100 million -- split between more than 20 banks, with the bulk of the fees going to Saudi lenders after foreign investors didn’t take part in the deal.

If anything, that was an improvement over the IPO of Saudi Arabia’s biggest bank in 2014, when advisers including HSBC reaped $6.7 million in fees, or just 0.1% of the $6 billion offering size.

Lenders and advisers including JPMorgan and Citigroup are set to share $42 million in fees from ACWA Power’s IPO that launched just after the offering by solutions by STC.

While that represents about 3.5% of the $1.2 billion deal size, banks were mandated more than three years ago, meaning the return over time is modest at best.