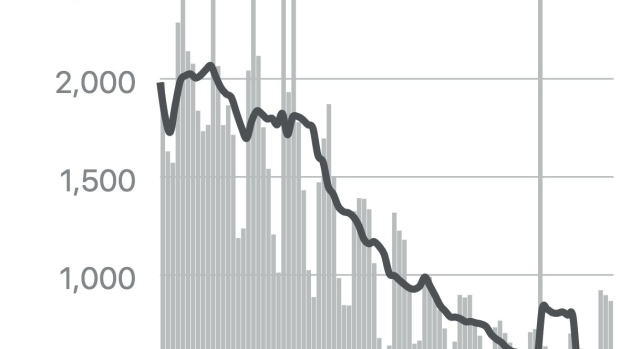 Alternative data has been a buzzword on Wall Street for years. Never has demand been greater than during the coronavirus era.

For many professionals, fundamental and technical stock analysis now take a back seat to epidemiological charts and real-time economic signals. Macro economists and money managers spend days tracking everything from Covid-19 reproduction rates to the number of restaurant reservations on OpenTable.

When it comes to data on the virus itself, market operators have their own unique set of obsessions, often different than what the rest of the world is focused on. Relentlessly forward-looking, investors have become all but inured to the economic reports that once set Wall Street’s pulse.

In 2020, that means new sources and new standards of interpretation. Following is a rundown of the coronavirus data investors say they’re most interested in, plus a sampling of high-frequency measures they track. And finally, views from a variety of strategists on why stocks haven’t turned south at the sight of rising Covid cases and a stalling real-time recovery.

A key measure of how fast the virus is spreading is the reproduction rate, or the number of people infected by each person who has Covid. As of Friday, 44 states had a reproduction rate above one, while 23 states reached new highs, according to Morgan Stanley. “In the United States, the trend and scope of new virus cases continue to worsen,” strategists led by Matthew Harrison wrote in a note.

A higher rate could have a silver lining, says RBC Capital Markets’ Tom Porcelli. “If new infections are concentrated in the young/non-vulnerable population, the spike in cases could very well morph into a positive as we build herd immunity well ahead of the much-feared 2020/21 flu season,” he wrote in a note.

Tom Lee, co-founder and head of research at Fundstrat Global Advisors, says the most important metric to watch remains daily deaths. On three consecutive days in the week ended July 10 -- Tuesday, Wednesday and Thursday -- the U.S. saw more than 800 deaths per day, according to The COVID Tracking Project. On Thursday, Texas, California, and Florida all saw a record jump in daily deaths.

There were some positive developments this past week as an analysis of trial data showed Gilead Sciences Inc.’s remdesivir reduced mortality risk for Covid-19 patients by 62% compared to standard care.

The positivity rate, or the share of tests conducted that come back positive, is an important indicator because it may provide clues as to whether or not a community is conducting enough tests to find cases, according to Johns Hopkins.

Though testing has ramped up over the last month, the positivity rate has nearly doubled from levels in early June. As of Friday, the latest data showed the positivity rate stood at 9.2% of all tests, while the seven-day average reached a new recent high of 8.4%, according to RBC’s Porcelli, who said the rates are “decidedly back in an uptrend.”

Evercore ISI’s Dennis DeBusschere has highlighted metrics including median age of those who have been infected with Covid-19 as well as the share of total U.S. deaths reported in long-term care facilities.

A colleague of his at Evercore, Mike Newshel, who has been tracking Covid daily, posited that since recent spikes have been concentrated among younger age groups, it’s possible these types of facilities are now better protected.

“This data adds to our conviction that demographics are making mass shutdowns less likely -- limiting left tail risk to the market,” DeBusschere wrote to clients July 7.

While infections continue to rise, they have yet to translate into the sharp uptick in hospitalizations akin to the ones experienced in the Northeast in April, according to TD Securities’ Oscar Munoz. That rings true to David Jilek, chief investment strategist for Gateway Investment Advisers, who acknowledges that hospitalization rates are increasing in some locations, but says it’s not uniform across the country.

“Most states that are opening up have a plan that is based on those key statistics, and as long as states are able to reopen their economies as planned, I think the market will continue to find that encouraging,” Jilek said in an interview. “But the story differs from city to city and state to state.”

States in the South and Southwest are seeing hospitalizations rise, though. Covid patients now occupy 24% of total hospital capacity in Arizona, 16% in Texas, and 15% in Florida, according to Centers for Disease Control and Prevention (CDC) data analyzed by Goldman Sachs. Jan Hatzius, Goldman’s chief economist, says estimates of available hospital capacity in some states vary, probably due to discrepancies between definitions or other methods.

At Yardeni Research, a favorite high-frequency gauge is gasoline usage, measured by the average consumption over four weeks on a rolling basis. It plunged in March and April, but has since then -- through the July 3 week -- risen 60%. The strategists say it needs to rise another 14% to get back to a normal pace of fuel consumption.

“It currently seems to be on the road to doing just that in coming weeks, though a slowing of state re-openings could place some roadblocks in the way of this indicator’s road to recovery,” strategists led by Ed Yardeni wrote in a note. To be sure, some of the gasoline data may be overstated given that many workers have been returning to their jobs using cars rather than public transportation. Still, the firm’s strategists predict more Americans are likely to be taking driving vacations this summer, a “positive for the U.S. economy.”

But the trend remains murky. Independence Day typically marks the busiest driving weekend of the year, but a real-time indicator run by RBC Capital Markets’ Michael Tran suggested a slowing in traffic activity, even though nationwide per-gallon gasoline prices were the cheapest during the holiday period in at least a decade.

Several sell-side research shops have taken to creating their own broad-based measures of the real-time economy, most of which signal a stalling in reopening momentum as Covid cases rise in hot spots across the country.

At Jefferies LLC, chief economist Aneta Markowska monitors a proprietary U.S. economic activity index made of components including small business activity, restaurant bookings, traffic congestion and web traffic to state unemployment portals. After two months of steady improvement, the gauge “has clearly flat-lined,” she wrote to clients July 6. “It has now been moving sideways for the past three weeks.”

Data from Bank of America Global Research show that location matters. States that are seeing an uptick in Covid cases are also beginning to see a drop in visits to retail and recreation locations, according to economists including Michelle Meyer, who cite Google metrics.

Tom Essaye, a former Merrill Lynch trader who founded “The Sevens Report” newsletter, is among those following the number of airline passengers that pass through TSA checkpoints each day. The numbers have edged higher in recent weeks, but are still more than 70% lower than where they stood a year ago.

“Throughput could be peaking, and if that’s the case, it’s a signal that the economic recovery is plateauing or stalling in response to the spike in Covid cases, and that adds to the downside risk in stocks,” Essaye wrote to clients July 9.

There’s evidence that worsening virus trends are starting to adversely impact consumer behavior -- and key among the warning signs are restaurant bookings, according to Lori Calvasina, head of U.S. equity strategy at RBC. She says the S&P 500’s performance stalled as the trend, measured using OpenTable data, deteriorated in the U.S.

“Restaurant booking trends have been choppy at the national level, with the year-over-year improvement peaking on June 21st, and have deteriorated in the states/major metropolitan areas with a rapid pickup in new coronavirus cases in recent weeks,” she wrote in a note.

Take New York, for example. As of July 9, the number of diners seated at New York restaurants was 92% below year-ago levels, according to OpenTable. The city has delayed the return of indoor dining to guard against an increase in virus cases as seen in states such as Florida, Texas and California.

One metric tracked by Jim O’Sullivan, chief U.S. macro strategist at TD Securities, is employment data from Homebase, a free scheduling tool used by 60,000 businesses and a million hourly employees in the U.S.

While likely exaggerated by the Independence Day holiday, the daily Homebase employment series showed “broad-based weakening in the past week,” O’Sullivan wrote in a report July 7. That followed a stalling out in the prior two weeks.

Jesse Edgerton, an economist at JPMorgan Chase & Co., has been issuing reports of spending by a panel of 30 million of its credit and debit cardholders. Data through July 5 show spending remains below a June 22 peak and appears to have “flattened out,” Edgerton wrote in a Thursday report.

He not only uses the data to track consumer spending habits, but also watches these metrics as an indicator of future Covid spread.

“This modest pullback in nationwide spending has not been driven by a sharp pullback concentrated in states where the virus has spread rapidly, but instead by modest pullbacks that are widespread across states,” Edgerton wrote. “This pattern raises the concern that behavior has not changed enough to stem the spread of the virus in the hardest-hit states.”

Views on Why Markets Are Holding Up

“A lot of it has to do with the support underlining the market from the Fed, quite honestly,” said Jeff Mills, chief investment officer of Bryn Mawr Trust. “I also think that investors believe that the political will to re-shut down the economy the way we saw a couple of months ago just isn’t there. So although it might slow down recovery and reopening to some extent, I think that investors believe that you’re not going to see, sort of, this full stop again and data will probably continue to get incrementally better even if it’s a little bit slower.”

“A lot of the very rapid rebound we’re seeing, and actually right now we’re even seeing it in some of the movie theaters as they’re starting to open up just the last couple of weeks around the world, everybody expected a little bit of pent-up demand,” said Jeffrey Kleintop, chief global investment strategist for Charles Schwab & Co. “So I don’t think it’s as surprising to see maybe that slow a little bit. I think there’d be concern if it headed back down in the shape of a W, but the fact is, maybe the V starts to moderate a little bit, which was I think in everyone’s expectations, kind of the base case anyway, so it’s not too upsetting for the market.”

“The S&P 500 isn’t actually pricing in that everything is great. In fact, if you look at the stocks that are actually the priciest within the market, a lot of them are the continued work-from-home, Covid, the companies that would actually benefit perversely from a second wave,” Savita Subramanian, BofA’s head of U.S. equity and quantitative strategy, said on a conference call with reporters. “For example, tech or kind of online versus brick-and-mortar, etc. -- you’re still seeing those valuations firmly skewed towards the idea that we’re not getting back to business as usual anytime soon. But I think that’s one kind of aspect to keep in mind -- is that the market isn’t necessarily pricing in an all-clear on the economy, but it’s really been driven by companies that are less economically sensitive.”