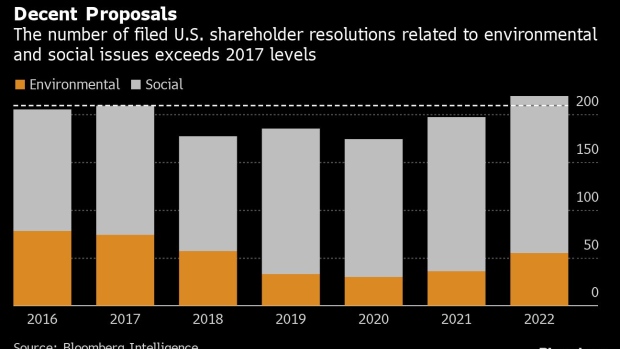 Over the next month or so, corporate executives will find out just how serious BlackRock Inc., Vanguard Group and State Street Corp. are about combating the climate crisis.

The annual proxy season is starting to pick up and shareholders are getting increasingly aggressive when it comes to global warming. Exxon Mobil Corp., Chevron Corp. and Phillips 66, as well as Warren Buffett’s Berkshire Hathaway Inc., are among the leading fossil-fuel producers facing proposals to reduce their emissions.

BlackRock, Vanguard and State Street are the three biggest investors in Exxon, Chevron and Phillips 66, and the top holders of Berkshire Hathaway’s Class B shares. How the three asset-management giants vote their shares has a huge impact, since they own on average about 20% of every company in the S&P 500 index.

“These passive investors aren’t only large holders, but by definition they’re long-term holders,” said Rob Du Boff, a senior analyst at Bloomberg Intelligence, who focuses on environment, social and governance issues. “It’s incumbent on them to manage the long-term risks and opportunities these investments may face, including ESG.”

BlackRock, Vanguard and State Street have announced they’re concerned by the deteriorating state of the climate and environment. Indeed, their voting records have begun to show support for more climate-focused and social resolutions. BlackRock, the world’s largest money manager, backed about 44% of environmental and social proposals it voted on during the last voting season, up from 7.2% in 2020, according to proxy-data firm Insightia.

Larry Fink, BlackRock’s chief executive officer, has used his annual letters to corporate CEOs to press them to respond to climate change, and his firm has argued that ignoring the transition to a world of net-zero carbon emissions “is no longer an option.”

In one of the most widely watched votes of last proxy season, BlackRock along with Vanguard and State Street backed adding climate-friendly directors to Exxon’s board, going against the fossil fuel giant’s wishes.

This year, Exxon will again be confronted by shareholder requests at its May 25 annual meeting to cut corporate emissions and hydrocarbon sales, and provide reports on its low-carbon business planning and plastics’ production.

A group of Chevron investors wants the company to adopt medium- and long-term greenhouse gas reduction targets, and make reliable methane emissions disclosures. At Phillips 66, shareholders are calling for more details about the company’s shift to recycled polymer for single-use plastics.

“Plastic, particularly plastic pollution in the ocean, is becoming a key issue of focus in the ESG world,” Du Boff said.

Shareholders including Neuberger Berman Group said they want Buffett’s company, which owns energy companies, a railway and an insurer, to publish an annual assessment that shows how Berkshire Hathaway manages its climate risks and also how it intends to lower greenhouse gas emissions.

And Buffett himself is under pressure. California Public Employees’ Retirement System, the largest U.S. public pension fund, said it plans to vote for a shareholder proposal that Berkshire Hathaway select an independent chairman—a rare rebuke for Buffett, who’s both head of the board and the conglomerate’s CEO. Berkshire opposes the proposal, saying the 91-year-old Buffett should continue in both roles.

“While he has a strong track record running Berkshire, even Warren Buffet has to answer to his shareholders,” Du Boff said.