Bitcoin hovers around US$20,000 level

Crypto bears who reckon the meltdown across digital currencies isn’t done yet are getting a new tool to bet on fresh declines.

The ProShares Short Bitcoin Strategy ETF (ticker BITI) launches Tuesday, becoming the first inverse exchange-traded fund in the US linked to the largest cryptocurrency. By reversing the performance of an index of Bitcoin futures, it aims to offer a relatively cheap and easy way to profit from any further losses.

BITI is arriving while the virtual-currency complex is in turmoil, with a digital-asset selloff amid soaring inflation gathering pace in the aftermath of last week’s super-sized Federal Reserve rate hike. It’s a spiral that’s seen even long-term holders start selling, and Bitcoin is down about 70 per cent since its November peak.

That raises the risk that the new fund has missed the bulk of the drawdown. The bet by ProShares is that making it easier to short Bitcoin will encourage more investors to express their negative crypto views.

“We think there are many investors who have bearish short-term or long-term view of Bitcoin and cryptocurrencies in general who haven’t acted on their view because it was too difficult or expensive,” Michael Sapir, ProShares chief executive officer, said by phone. “Those investors will be able to gain short exposure to Bitcoin as easily as buying an ETF in traditional brokerage account.” 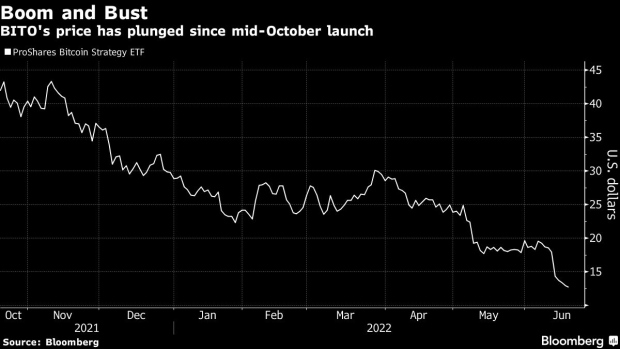 ProShares was also behind the first US ETF linked to Bitcoin back in October, the Bitcoin Strategy ETF (BITO). That enjoyed one of the biggest launches in ETF history, but its debut turned out to mark roughly the top of the digital-asset boom.

BITI charges an expense ratio of 0.95 per cent, matching that of BITO. While that’s higher than the bulk of actively managed funds, the spot borrowing rate for shares of BITO -- one measure of the cost of shorting the fund -- currently stands near 13.9 per cent, according to data compiled by S3 Partners.

The catch is that, like most inverse ETFs, the new product is designed for only short-term use. It returns the inverse performance of its underlying index for one day at a time, meaning it effectively resets every day. Investors who hold onto the ETF for longer periods therefore risk underperforming because of its ongoing costs.

The ProShares product is the first bearish Bitcoin ETF to launch, with similar filings from rivals Direxion and AXS still in the pipeline. Direxion filed for a such a fund in October following BITO’s launch, but pulled the application at the request of US regulators.