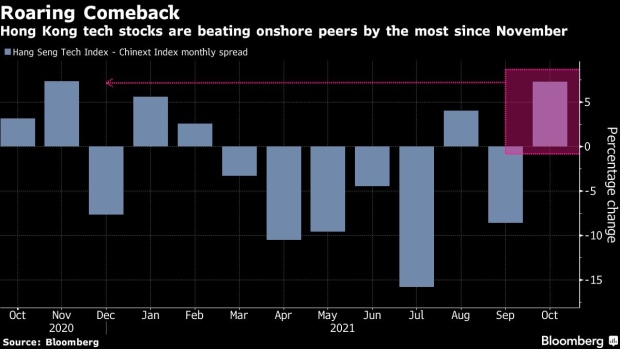 The upgrade to overweight by the world’s biggest asset manager and UBS, which had a bearish view for 16 months, adds to the belief that the worst for the underperforming market may be over. It comes at a time when a gauge for global equities is less than 1% away from setting a new record high. Fidelity International Ltd. is also preparing to seize some “deep value opportunities.”

“We are dipping our toes back in, and we think there is more room for tactical upside,” Ben Powell, chief investment strategist for Asia Pacific at BlackRock Investment Institute, said in an interview with Bloomberg Television. “The market has got a much higher degree of comfort” about the level of regulatory scrutiny that is here to stay, he added.

UBS strategists, including Niall Macleod, upgraded their recommendation on Chinese equities on Wednesday, saying tighter regulations have been priced in, while corporate earnings and valuations are set to improve.

The change in their stance underscores how investor skepticism over China has been receding despite negative factors such as President Xi Jinping’s regulatory tightening against private enterprises, contagion risk from China Evergrande Group’s debt crisis and slowing economic growth.

A rebound in October has pulled Hong Kong’s Hang Seng benchmark from the throes of being the worst performing national equity gauge of this year. A host of other key stock indexes, including the Hang Seng Tech index, are forming bullish technical patterns.

“The market of course has got a much better understanding of where the level” of regulatory pressure is and earnings are set to improve, BlackRock’s Powell said.