Wall Street giants such as Goldman Sachs Group Inc. and JPMorgan Chase & Co. have tens of billions of dollars at stake in China as political tension risks derailing the nation’s opening of its US$45 trillion financial market.

Five big U.S. banks had a combined US$70.8 billion of exposure to China in 2019, with JPMorgan alone plowing US$19.2 billion into lending, trading and investing. That’s a 10 per cent increase from 2018.

While their assets in the country are comparatively small, they have big expansion plans there that may come undone if financial services firms are dragged into the tit-for-tat between the two countries.

Not only would that cloud their growth plans, it would also threaten the income they have generated over the years from advising Chinese companies such as Alibaba Group Holding Ltd.

Profits in China’s brokerage industry could hit US$47 billion by 2026, Goldman estimates, with foreign firms gunning for a considerable chunk.

There are US$8 billion in estimated commercial banking profits as well as a projected US$30 trillion in overall assets to go after, also being pursued by fund giants such as Blackrock Inc. and Vanguard Group Inc.

“If you’re an American financial institution and you have an approved plan to expand into China, you’re going to continue that plan to the extent that the U.S. government allows you to because you see great future profits,” said James Stent, a former banker who’s spent more than a decade on the boards of two Chinese lenders.

“A U.S.-China cold war is not good for your plans to build business in China.”

After years of trade war turmoil, U.S. policy makers are now starting to take aim at the financial industry amid growing skepticism over American firms plowing money into a country perceived as a big geopolitical foe.

A body advising the U.S. Congress this week questioned Wall Street’s push, saying lawmakers need to “evaluate the desirability of greater U.S. participation in a financial market that remains warped by the political priorities of a strategic competitor.”

Add to that potential sanctions against China and even its banks over the crackdown on Hong Kong, and the situation could further escalate. 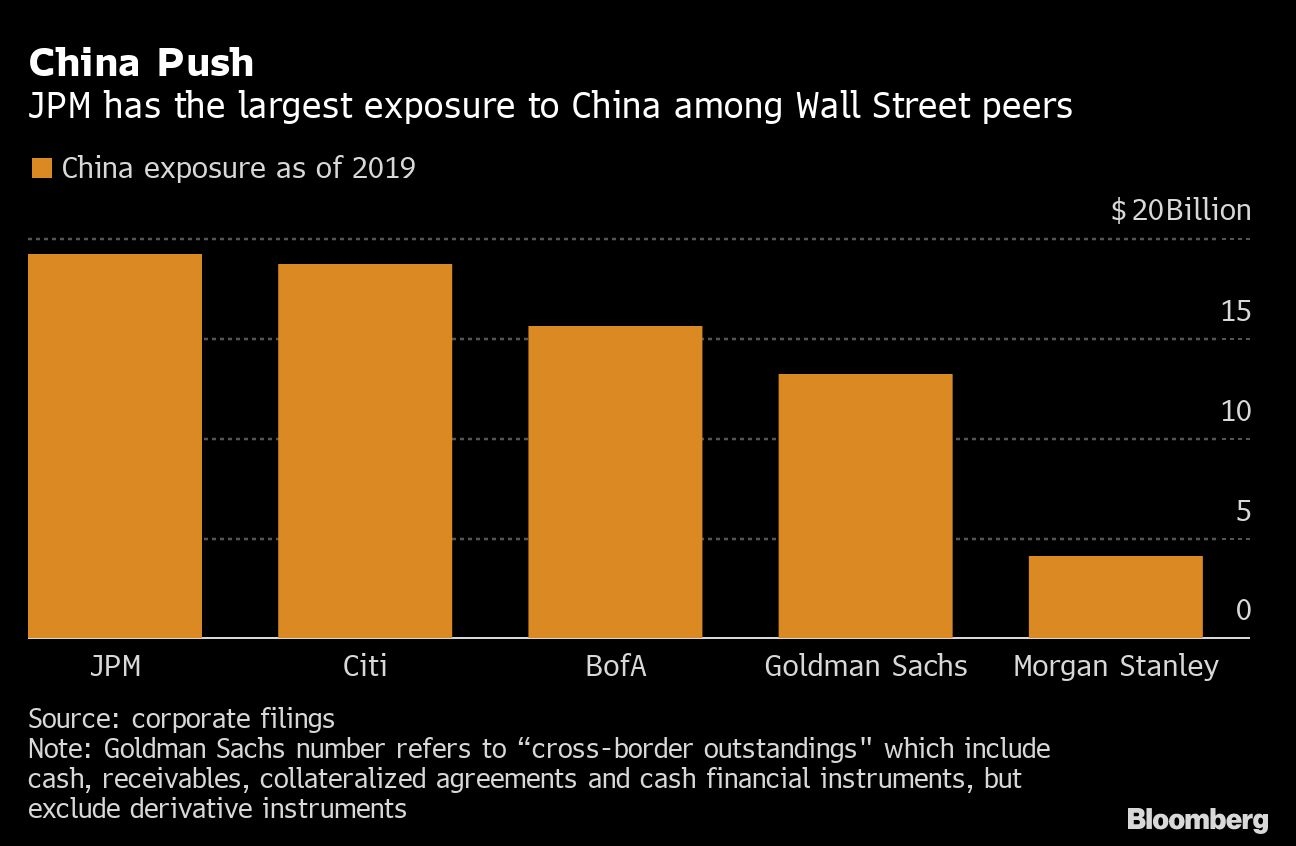 Here’s a run down on the biggest U.S. banks’ presence in China right now and their plans.

Goldman, which has spent years lobbying for control of its onshore business, won approval this year.

Chief Executive Officer David Solomon has pledged to infuse its mainland business with hundreds of millions of dollars in new capital as the bank plans to embark on a hiring spree to double its workforce to 600 and ramp up a wide variety of businesses.

Goldman put its “cross-border outstandings” to China at US$13.2 billion at the end of last year. But its two onshore operations had capital of just 1.8 billion yuan ($251 million), making a profit of almost 300 million yuan.

Hosting an annual summit in Beijing with 1,900 investors and 600 companies last year, Morgan Stanley Chief Executive Officer James Gorman said in a Bloomberg Television interview that the bank is in China “for the long run.”

He highlighted its presence there for 25 years and its handling of hundreds of billions of dollars in equity and merger deals for Chinese businesses.

Morgan Stanley won a nod to take majority control of its securities venture this year, and last year had a net exposure of US$4.1 billion to Chinese clients.

Its local securities unit, however, has revenue of just 132 million yuan, posting a loss of 109 million yuan last year.

The bank has been overhauling senior management of the venture, installing its staff in key roles.

It plans to apply for additional licenses to broaden its products and invest in new businesses, build market-making capability and expand its asset management partnership and ultimately take control.

“It’s a natural evolution to bring the global investment banks into this market,” Gorman said in May last year.

The biggest U.S. bank has been doing business in China since 1921. Chief Executive Officer Jamie Dimon has said that his firm is committed to bringing its “full force” to the country.

This year it applied for full control of an asset management firm as well as a securities venture, and is expanding its office space in China’s tallest skyscraper in downtown Shanghai.

JPMorgan’s China total exposure in 2019 was US$19.2 billion, including US$11.3 billion in lending and deposits and US$6.5 billion in trading and investing.

JPMorgan China’s banking unit had 47 billion yuan in assets last year and made a profit of 276 million yuan, while its newly started securities firm had capital of 800 million yuan.

Citigroup Inc., which has been doing business in China since 1902, had total exposure to the country of US$18.7 billion at the end of last year. Its local banking arm had total assets of 178 billion yuan, making a profit of 2.1 billion yuan.

Citigroup, which is setting up a new securities venture in China, is the only U.S. lender that has a consumer banking business in the country with footprint in 12 cities including Beijing, Changsha and Chengdu.

New York-based Citigroup said last month that it has doubled its overall revenue from China to more than US$1 billion over the past decade.

China represents 1.1 per cent of Citi’s total global exposure and includes local top tier corporate loans and loans to US and other global companies with operations in China, a bank spokesman said.

Bank of America Corp., the only major bank to decide against pursuing a securities joint venture, is continuing to expand into the world’s second-largest economy.

The Charlotte, North Carolina-based lender is looking to provide a fuller range of fixed income services in the country.

Its largest emerging market country exposure in 2019 was China, with net of US$15.6 billion, concentrated in loans to large state-owned companies, subsidiaries of multinational corporations and commercial banks.

It followed only the U.S., U.K., Germany, Canada and France in terms of exposure for the bank.