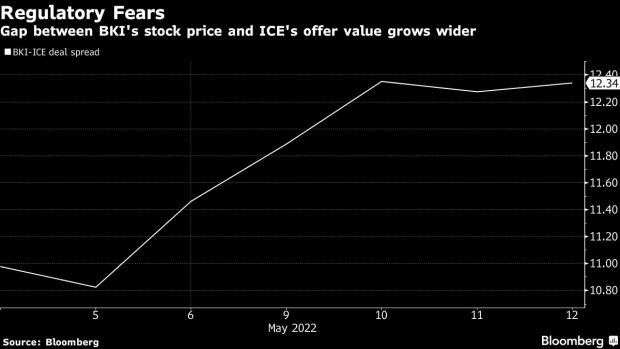 A Wall Street street sign in front of the New York Stock Exchange (NYSE) in New York, U.S., on Friday, Dec. 31, 2021. U.S. stocks swung between gains and losses, with moves exacerbated by thin trading on the last session of the year. Photographer: Michael Nagle/Bloomberg , Bloomberg

The gap between Black Knight’s stock price and the value of ICE’s cash and stock offer is more than $12 per share, making it one of the largest merger arbitrage spreads among all U.S. transactions.

The wide spread reflects fear about the potential antitrust issues raised by combining the top two players in the market for mortgage origination software, and that the buyer could easily walk away if challenged, merger arbitrage analysts said. The deal, which was announced last week, is still in early stages and the spread could narrow as the review advances, they said.

Under the terms of the agreement, ICE isn’t required to offer divestitures, agree to conduct remedies or litigate if there are antitrust issues with the merger, Elevation LLC’s merger arbitrage specialist Betty Chan wrote in a note.

And Anna Pavlik, senior counsel at specialized brokerage firm United First Partners, said “These provisions put ICE squarely in control of the regulatory outcome, since ICE can decide to simply walk away without offering any remedy or having to litigate, while BKI’s only recourse is to receive a breakup fee.”

The companies said the deal would create a platform to help lenders throughout all stages of a mortgage from a customer’s initial home search through loan servicing and potential default. They have sought to downplay any overlap, telling investors that ICE and Black Knight offer “complementary businesses that service different parts of the mortgage ecosystem.”

In a presentation on the deal, ICE described Ellie Mae’s Encompass as the “standard” software used for processing and underwriting while Black Knight’s Empower offers a “custom solution.” Yet in securities filings and investor presentations, Black Knight has consistently referred to Ellie Mae as its biggest competitor.

“In origination, I’d say Ellie Mae is our most significant competitor,” Black Knight Chief Financial Officer Kirk Larsen said at an investor conference in December 2020. “They have 40-plus percent market share; we have low double digit.”

Justice Department antitrust attorneys are likely to look closely at that overlap, said Jennifer Rie, an analyst for Bloomberg Intelligence.

“It’s going to come down to whether they can show there’s a difference here,” Rie said. “The companies that license this software, do they view them as complements or not? We have a very aggressive DOJ, particularly in areas like financial markets.”

Divesting Black Knight’s Empower business -- which contributed 11% of the company’s $1.48 billion in revenue last year -- could also be tricky, Rie said. Antitrust officials would likely oppose a sale to a large bank or major lender because of the sensitive nature of the data held by the platforms, leaving only non-lenders or private equity as possible buyers, she said.

ICE and Black Knight declined to comment on potential antitrust hurdles facing the deal. The Justice Department did not immediately respond to a request for comment on Thursday night.

Regulators also may be interested in how the combined company would use customer data, given Black Knight’s leading position in mortgage servicing and ICE’s strength in mortgage origination, said United First Partners’ Pavlik.

Antitrust enforcers are likely to look at whether a combined ICE-Black Knight would have the ability to leverage its dominance in one area, like loan origination, into other areas where its software is less popular, said Amanda Wait, an antitrust lawyer at Norton Rose Fulbright LLP.

The Justice Department would likely be concerned if the merged company sought to bundle all of its services, shutting out rivals who only offer software for one part of the mortgage workflow, she said.

The company told investors it expects to close in the first half of of next year, though it can extend through November 2023 if needed to gain regulatory approval.