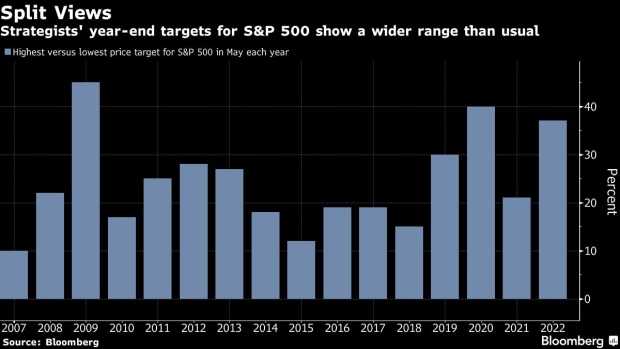 (Bloomberg) -- Seven straight weeks of losses for American stocks and now a narrowly averted collision with a bear market have left Wall Street prognosticators as lost as they were during the coronavirus crash.

While this episode may lack the pandemic’s shock, it makes up for it in the sheer number of cross-currents. First and foremost is the Federal Reserve, bent on wringing excess from the economy. Add to that war, snarled supply chains and equity valuations that were recently at two-decade highs.

The result has been a wide variance in predicted outcomes. After another six strategists slashed year-end calls for the S&P 500 this month, the gap between the highest and lowest projection sits at 37%. That big of a divergence has prevailed only one other time in the past decade at this time of year: just after the tumultuous selloff of March 2020.

Stocks got no easier to interpret Friday. The S&P 500 fell as much as 2.3%, leaving it down more than 20% over five months and at risk of a bear market close. Buyers swooped in during the last hour and spared the index that ignominy, cutting its loss since Jan. 3 to 18.7%. It still fell more than 3% in the week.

Evidence of investor befuddlement is everywhere. Just this week, beaten-up securities like Cathie Wood’s flagship ETF and unprofitable tech companies alternated between gains and losses for five days in a row. Meanwhile, once-sleepy companies like Walmart Inc. suddenly went wild, and consumer staples plunged more than 8% this week, defying the industry’s reputation as a haven during market turmoil.

How bad can things get? To skeptics who drove the S&P 500 toward a bear market, a recession is the inevitable outcome of the Fed’s war against inflation. If you’re a bull, you’re probably clinging to hope the Fed is making progress toward its goals. Financial conditions have tightened at the fastest pace this far into a hiking cycle since at least 1987.

“The nature of the uncertainty we’re facing is different, but the job of Wall Street strategists isn’t any easier now than it was during the pandemic,” Quincy Krosby, chief equity strategist at LPL Financial, said by phone. “There’s zero certainty on where the economy is heading. You have a ‘recession’ camp, a ‘soft landing camp,’ and everything in between.”

Stocks fell over the past five days, sending the S&P 500 to its longest streak of weekly slides in 21 years. The Nasdaq 100 also posted seven consecutive weeks of declines, a stretch not seen in a decade.

The slump, along with deep losses in fixed income, has led to a tightening in financial conditions, a scenario that accords with Fed Chair Jerome Powell’s expectation that policy usually works this way to reach the real economy.

The financial conditions index, as tracked by Goldman Sachs Group Inc., has fallen 1% since the first rate increase two months ago. The pace of tightening at this stage exceeds all previous five hiking cycles, data compiled by Bloomberg show.

This week, John Stoltzfus at Oppenheimer, whose year-end target of 5,330 is the highest in Bloomberg’s latest survey of strategists, reiterated his bullish stance in an interview with Bloomberg TV. He saw a parallel between now and past instances where bearishness was overblown.

“I’ve been doing this for 39 years, and my gut is telling me right now this looks a lot like early 2009, before things straightened out. It looks like 1994. It looks like the fourth quarter of 2018,” he said. “These things, if you projected negatively on that point, you missed the rally that followed after things were basically right-sized.”

For context, March 2009 marked the onset of a prolonged bull market that’s born amid the global financial crisis. In 1994, the Fed started a hiking cycle and successfully avoided a recession. And amid plunging stocks in late 2018, the central bank halted its rate hikes and began easing the following year.

For now, policy makers have little sympathy for the market’s bleeding. But investors haven’t given up on their hope for the Fed to step in should things worsen, a concept widely known as the “Fed put.” In the latest Bank of America Corp. survey, money managers expected that to kick in when the S&P 500 falls to 3,529, a level that’s 9.5% below Friday’s close.

Yet the market’s repeated failures to recover have frustrated even the most skeptical on the Street. Just ask Eric Johnston at Cantor Fitzgerald, whose year-end target of 3,900 is the lowest among strategists tracked by Bloomberg. In early May, on the heel of the S&P 500’s worst April in five decades, he told clients that stocks were poised for a rebound. Weeks later, the carnage showed no signs of abating and he issued a mea culpa.

For investors, the 2022 stock market is no easy ride either. Conditioned to years of success of dip buying, they poured hundreds of billion dollars into equity funds in the first quarter, only to see losses piling up.

From government bonds to staple stocks, what used to work as haven assets are no longer a sure bet. Soap and toothpaste makers in the S&P 500 suffered their worst weekly drop since March 2020 as results from firms like Walmart showed they’re not as resilient as expected when inflation, rather than demand, is the world’s trouble.

Perhaps more frustrating is the wild gyrations in risky tech stocks. The ARK Innovation ETF (ticker ARKK) changed in directions every day this week, with each move exceeding 1.4%. A Goldman basket of unprofitable technology shares presented a similar pattern, baffling both bulls and bears.

Broadly, professional forecasters are quickly rolling back their what now look like way rosy projections. Strategists at Wells Fargo Investment Institute cut their year-end view on the S&P 500 for the second time in three weeks Wednesday, saying a mild recession is now its base-case scenario. Deutsche Bank’s Binky Chadha and BMO Capital Markets’s Brian Belski were among those who also lowered their estimates this week.

“Everyone was drinking from the monetary trough and now comes the hangover,” Paul Nolte, portfolio manager at Kingsview Investment Management, said by phone from Chicago. “Everyone’s concerned that the Fed will have to break things before it fixes inflation.”