Across Wall Street, from BlackRock Inc. to T. Rowe Price Group Inc., some veterans of the bond market’s booms and busts are seeing signs that it’s safe to start buying again.

Few are eager to call the bottom just yet, not with inflation still surging at a four-decade high and the Federal Reserve only at the early stages of an aggressive cycle of monetary policy tightening to contain it.

But yields have jumped so much this year, roughly doubling those on 10-year Treasuries, that it recalls past buying opportunities that paid off when the tide turned. On top of that, there are indications that the economy is cooling, with big-box retailers reporting a shift in consumer spending and home sales on the decline. And the drubbing taken by risky assets from growth stocks to cryptocurrencies has turned Treasuries into a haven again, delivering gains to those who bought when yields peaked earlier this month.

All of that has longtime money managers seeing reasons to start cautiously increasing their exposure, with some preparing to step up the pace if yields overshoot what they see as a fair level. At JPMorgan Asset Management, the head of global rates said the worst of the rout is likely over because the Fed’s rate hikes are largely already priced in.

“We are getting to a point where a lot of bad news is priced in,” said David Giroux, head of investment strategy at T. Rowe Price Investment Management, who said the environment is now reminiscent of 2013 and 2018, when 10-year yields topped out at over three per cent. “We have reduced cash and have been buying Treasuries.”

The shift in sentiment has been evident over the past two weeks amid speculation that China’s COVID-19 lockdowns, the war in Ukraine and tighter monetary policy worldwide will exert a drag on growth. By late Monday, 10-year yields were holding around 2.85 per cent, down from as much as much as 3.2 per cent on May 9, with similar declines in other maturities. 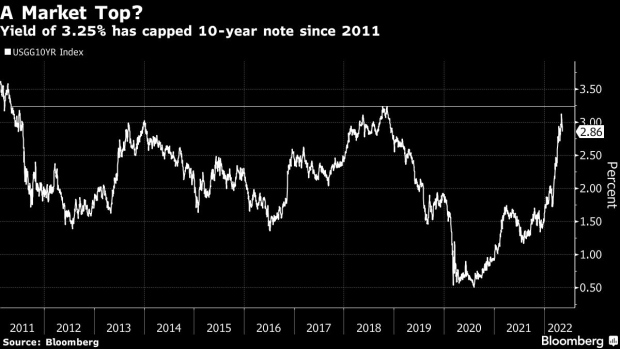 The Treasury market is still facing considerable uncertainty, and it’s possible that yields could push above the peaks of the past decade if the Fed finds itself fighting against persistent inflation. Speaking last week, Fed Chair Jerome Powell said the central bank was prepared to push policy beyond neutral -- the level that’s not seen as affecting growth one way or another -- until there’s “clear and convincing” evidence that inflation is coming down. The central bank in June will also begin cutting its bond holdings by not buying new securities to replace those that mature, potentially adding fresh headwinds to the market.

Goldman Sachs Group Inc.’s analysts have also sounded a cautious note, forecasting that the 10-year yield will end the year around 3.3 per cent.

“Our duration committee is not quite at the point where we say it’s a greenlight,” said RJ Gallo, a senior portfolio manager at Federated Investment Management who has been with the asset manager since 2002. “The economy still has momentum and inflation is not coming down rapidly.”

Yet there are some signals the Fed’s moves are starting to tighten financial conditions. Gauges of corporate credit risk have risen, making it more costly for heavily indebted companies to borrow. Mortgage rates are slowing the housing market, while the stock market drop this year threatens to further erode already dampened consumer confidence.

“We are not completely out of the woods with inflation -- so therefore there’s a chance you could possibly see slightly higher yields from here,” said Yvette Klevan, a portfolio manager in the global fixed-income team at Lazard Asset Management who has been working in the investment field since 1982. Yet, she added: “I’d argue that at roughly three per cent on the 10-year Treasury, a lot is already baked in.”

At BlackRock, the world’s largest asset manager, funds have “added a little more interest-rate exposure in recent weeks,” said Rick Rieder, the chief investment officer of global fixed income. “People are fearful of much higher rates and we have taken the other side of that.”

Such buying when rate-hike fears are cresting has been lucrative in the past. In 1994, when the Fed’s hikes pushed its benchmark from three per cent to six per cent in just 12 months, bonds tumbled as traders priced in that the aggressive moves would continue. But growth slowed enough that the central bank started cutting rates in 1995, driving Treasuries to an 18 per cent gain that year.

“It’s in our DNA to look for value in a gloomy bond market, and after a dismal ‘94 bonds did well the following year,” said Mark Lindbloom, a portfolio manager at Western Asset Management. “We know from past cycles that the Fed tightens too far, and we think we’re near the point where higher interest rates slow consumer and business demand.”

Western had been burned from buying bonds earlier this year. Still, it seized on the most recent spike in yields to add to its holdings of both short and long-dated Treasuries.

“We’re a bit beaten up and bloody,” Lindbloom said. “But my history as an active manager says that usually means there is opportunity.”