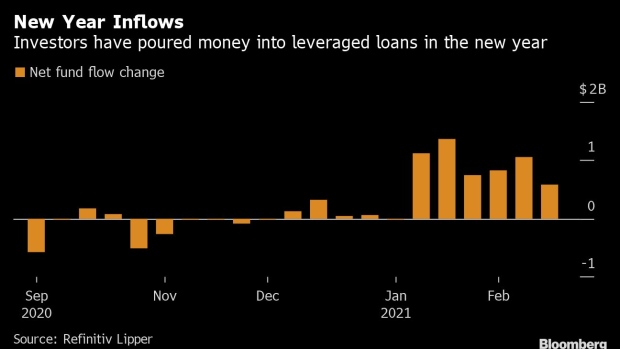 (Bloomberg) -- From money managers at BlackRock and T. Rowe Price, to analysts at Goldman Sachs, to the credit shops run by Blackstone and KKR, a new economic reality is prompting Wall Street’s most powerful forces to adjust their investment strategies.

The rise in inflation set to accompany the post-pandemic economic boom is threatening to reverse the four-decade decline in U.S. interest rates, sparking a rush to protect the value of trillions of dollars of debt-market investments.

The first signs of this shift have already emerged: These firms and others are moving money into loans and notes that offer floating interest rates. Unlike the fixed payments on most conventional bonds, those on floating-rate debt go up as benchmark rates do, helping preserve their value.

“We’ve had a long 35 to 40 years of rate decline that has been a big support behind fixed-income investing, a big support behind equity multiples expanding, and so for those of us that live and breathe investing, it’s been a wind at our back for a long time,” said Dwight Scott, global head of credit at Blackstone, which manages $145 billion of corporate debt. “I don’t think we have the wind at our back anymore, but we don’t have the wind in our face yet. This is what the conversation on inflation is really about.”

To be clear, no one is predicting the type of rampant inflation the likes of which roiled the U.S. economy almost five decades ago. Yet a subtle shifting of the tide is already underway, many say.

Not since 2013, in the months before Federal Reserve Chairman Ben Bernanke triggered the so-called taper tantrum by suggesting the central bank could begin to slow the pace of monetary stimulus, have global bonds been under so much pressure to start the year.

Fueled by growing concern that price pressures are poised to reemerge amid an economic boom powered by vaccines, pent-up consumer demand and another round of government stimulus, 10-year Treasury yields have soared more than 0.4 percentage point.

Amid the upheaval, perhaps no market is attracting more attention than leveraged loans. Weekly flows into funds that buy that debt have already exceeded $1 billion three times this year -- triggering fresh talk of froth -- after having not topped that threshold since 2017.

The asset class’s relatively high yields make it an appealing investment for firms seeking to juice returns as the gap between Treasury rates and corporate debt narrows. At the same time, continued monetary and fiscal support from policy makers is expected to boost company earnings, helping them trim debt multiples that ballooned amid the pandemic.

Yet what makes leveraged loans especially attractive to many is their floating payment stream. As the long end of the Treasury curve continues its dramatic ascent, their lack of duration -- or price sensitivity to moves in underlying rates -- provides investors significant protection, even in an environment where the Fed keeps its policy rate near zero and the front-end anchored for years to come.

“You don’t buy leveraged loans today because you expect the floating rate component to go up,” said Lotfi Karoui, chief credit strategist at Goldman Sachs. “That is not the thesis. The floating rate component is going to stay flat for the foreseeable future. You buy it because the reflation theme is something that hurts more the high-yield bond market relative to the loan market.”

That’s not to say that junk bonds aren’t luring their fair share of cash too.

The asset class can often be a safe harbor from the threat of rising rates given that an improving macroeconomic backdrop tends to lower credit risk, allowing spreads to tighten.

New issuance is off to a record pace to start the year, and the relentless hunt for risky assets pushed yields on the debt below 4% for the first time ever earlier this month.

Given robust growth prospects, Michael Kushma, chief investment officer for global fixed income at Morgan Stanley Investment Management, said he’s comfortable going further down in credit quality into B and CCC rated bonds to generate returns. The firm has also been adding leveraged loan exposure “when it makes sense,” he said, noting that some clients can’t hold the debt in their portfolios.

Still, some say that record-low yields, even in the riskiest segments of the speculative-grade bond market, combined with the fact that average maturities have increased markedly over the past year, have amped up the potential risk and lessened the asset class’s appeal as a shelter relative to loans.

“We’ve increased our allocation to bank loans, in part by selling high yield,” Sebastien Page, head of global multi-asset at T. Rowe Price, said via email. “Put it this way: if we can get a similar yield on high yield and loans, on a risk adjusted basis the asset class that should behave best in rising rates -- loans -- looks more attractive.”

Not every asset manager can simply dial up their credit risk, of course.

For many, one alternative is the floating-rate note market, a usually sleepy corner of high-grade credit with a fairly narrow buyer base.

In recent weeks, demand has surged as investors look to avoid negative total returns in fixed-rate debt. It’s fueling a spurt of new issuance, including the first ever non-financial deal tied to the Secured Overnight Financing rate, the benchmark intended to replace Libor as the reference rate for hundreds of billions of dollars of floating-rate debt.

“The big risk in the market really is inflation, whether it is transitory or whether it is something more deep rooted,” said Arvind Narayanan, head of investment-grade credit at Vanguard. “There’s just a tremendous amount of stimulus in the marketplace, both monetary and fiscal, that favor economic growth.”

Others are turning to more esoteric asset classes, including collateralized loan obligations and private credit, as they seek higher yields and more floating-rate exposure.

Blackstone, which manages $145 billion in credit assets, has ramped up investing in leveraged loans and direct lending over the last several years, and has accelerated the shift in the last month, according to Scott. It has also become one of the largest CLO managers in the world.

Ultimately, any hiccup in the recovery could quickly dent expectations for inflation and cause rates to retrench.

Bond bulls also argue that the chances of price pressures that weren’t present prior to the pandemic suddenly emerging in its aftermath are slim, at best, given the continuing structural shifts in the economy.

“Inflation will be more transitory than sustained,” said Dominic Nolan, a senior managing director at Pacific Asset Management. “We have to see how steep the curve gets and if the perceived inflationary pressures actually materialize into inflation.”

Yet many say the Fed’s seeming tolerance for an overshoot on the inflation front in the months and years ahead makes this time different.

“Rising rates could very well be a prelude to inflation as we take into account the current macroeconomic environment,” John Reed, head of global trading at KKR, which manages about $79 billion of credit assets, said via email. “A modest rise in rates off current levels seems likely for the remainder of 2021, but the Fed has been transparent in willing the market to invest behind yield, growth and recovery.”