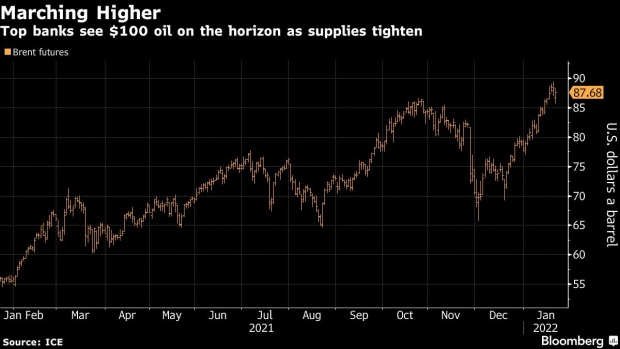 (Bloomberg) -- Three top investment banks are now expecting oil to hit $100 or more during the year, as supplies can barely keep up with a recovery in crude demand.

High oil prices have been a thorn in the side of top oil consumers including the U.S. and China. Energy costs have been a major driver of inflation around the world, and triple digit oil prices threaten to add more pressure on central banks to raise interest rates, threatening economic growth.

Oil prices have surged to the highest levels in about seven years, boosted by a spate of outages in countries from Libya to Nigeria and geopolitical tensions in the Ukraine and the Middle East. The disruptions come as the cushion for supplies has softened, with low inventories across the world and most countries pumping out as much as they can already.

“Without more abundant supply but a robust demand recovery, oil prices will need to rise to the level at which demand destruction kicks in,” said Morgan Stanley analysts including Martijn Rats, adding that $90 a barrel is not yet the level at which that would occur.

For oil to hold above $100, the U.S. dollar needs to be weak, Bank of America analysts including Francisco Blanch said in a note. A weaker greenback makes dollar-denominated commodities cheaper for holders of other currencies.

Still, others are skeptical. After the first quarter, Citi analysts see global oil markets moving into a structural surplus for the next seven quarters as the supply outages ease.