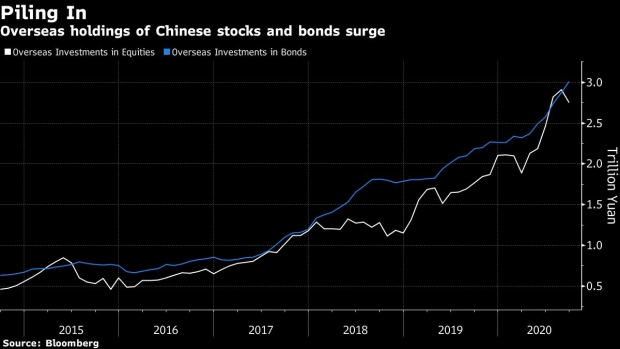 (Bloomberg) -- A year into China’s big bang opening of its financial markets, Wall Street has ever more to lose from a growing consensus in Washington over reining in Beijing.

A star-studded cast of global banks and fund houses have increased their presence in China this year and a record $212 billion of foreign funds have poured into Chinese bonds and stocks. Alongside have come a myriad of measures from Washington aimed at decoupling the U.S. from China, an issue that’s drawn bipartisan support given widespread alarm about the Asian nation’s rising influence in global affairs.

The latest U.S. salvo was fired on Wednesday with the passage of legislation that could lead to Chinese companies -- including behemoths like Alibaba Group Holding Ltd. -- getting kicked off American exchanges. The turbulence hasn’t swayed global finance from the opportunity to capture a share of profits that are estimated to swell to $47 billion in investment banking alone by 2026.

Goldman Sachs Group Inc. and JPMorgan Chase & Co. are now pushing to take full control of their China ventures, while fund giants such as BlackRock Inc have been given the greenlight to set up shop.

“There’s a lot of risk and uncertainty about future policy directions” said Chen Zhiwu, director of the Asia Global Institute at the University of Hong Kong. “But on the other hand, wow, the market is so big so some people are still willing to go in for the potential high gain at the cost of being exposed to a lot of high risk.”

All signs point to Congress continuing the confrontation under President-elect Joe Biden’s administration, with the risk of the finance industry becoming deeper enmeshed. Biden’s pick for national security adviser, Jake Sullivan, has questioned why the U.S. should prioritize opening China for the likes of Goldman Sachs, arguing that the competition between the two powers will turn on how “effectively each country stewards its national economy and shapes the global economy.”

At the same time, Beijing has vowed to continue easing barriers to its capital markets. Guo Shuqing, the chairman of the China Banking & Insurance Regulator Commission, wrote in a recent article that the fortunes of a nation are “often closely tied to its financial power” and that it will seek to actively participate in shaping international rules.

The opening isn’t some act to “reconcile” with the U.S. to defuse tensions but driven by self interest, said Jessie Guo, head of equity research at China Merchants Securities HK Co. The nation will keep the doors open as it pivots toward a “dual circulation” strategy in which the domestic market becomes the main growth driver, supplemented by foreign demand, she said.

The push has so far paid off for China in a tumultuous year, when its economy outperformed major rivals after the nation successfully contained the coronavirus.

A September survey by HSBC Qianhai Securities showed that almost two-thirds of more than 900 global institutional investors and major corporations are planning to increase their investment in China by an average of 25% over the next year. Investors in North America stood out as the only ones saying they will hold off on increasing their exposure to mainland Chinese corporate bonds and commercial paper.

Approvals to take major control in China have continued for foreign banks, asset managers and payment clearing networks. Firms including Goldman and Credit Suisse Group AG have ambitious hiring plans in China, and argue they can boost investments in the country since they are better able to control where the money is being put to use. Analysts at Goldman at the end of last year estimated profits in the Chinese brokerage sector could reach $47 billion by 2026, up from $10 billion in 2018.

Regulators have also given overseas traders access to futures and options, expanded a U.S.-style registration system for IPOs and scrapped quotas on foreign inflows.

That’s being noticed in the halls of Washington. A Congressional commission this week warned that China’s financial opening was part of a “calculated strategy” to secure foreign investments and use them to shore up the domestic economy.

U.S. lawmakers this week approved legislation that could lead to Chinese companies getting delisted unless they allow a review of their financial audits, albeit with a three-year phase-in period. Sanctions on Chinese firms connected to the military triggered JPMorgan to exclude new bonds from impacted companies from its widely followed debt indexes, underscoring how the U.S. can affect index-tracking investors around the world.

Banks also face a deadline this month for ensuring that they aren’t doing business with Hong Kong and Chinese officials sanctioned over their role in the political crackdown on the financial hub. Lenders, including major Chinese banks, have already taken steps to comply.

Decoupling from the U.S. could create a windfall for China’s financial sector as it swoops in for a bigger slice of the global IPO market, drawing overseas investors to its derivatives trading and adding new vigor to the world’s fastest-growing pool of wealth. Yet, worsening relations with the U.S. could spook foreign companies enough for them to consider postponing expansion, cutting investment, or leaving China altogether. Read more here

Banks and asset managers have to do more due diligence to avoid the risks of servicing sanctioned Chinese firms such as helping them to list or to raise capital, according to Benjamin Quinlan, chief executive officer at Quinlan & Associates, a strategy consultant in Hong Kong.

“That means having much stricter ‘know your customer’ and onboarding controls,” he said. “The reality is the biggest fines in the world are for sanction breaches with the U.S.”

China’s response so far has been to continue down the path of further opening, though the toughest reforms are yet to come. China’s strategy to make the yuan a global currency has so far come up short, with its share in payments falling to 1.66% as of October from 1.94% at the end of last year.

Capital controls and the uncertainty of repatriating funds remain a key hurdle for global investors as do a lack of transparency in rule-making. The abrupt cancellation of Ant Group’s record IPO in early November sent shudders through the markets.

Henry Fernandez, chairman of MSCI Inc., said in a recent Bloomberg TV interview that the opening shows China “is recognizing that in order to have that leadership in the world, economically, politically and financially, they need to embrace openness and become one of the largest countries in the world in all these markets.”

With the incoming Biden administration, “hopefully we can avoid a capital war, which can be devastating,” Fernandez said.

Here’s a scorecard on the financial opening: