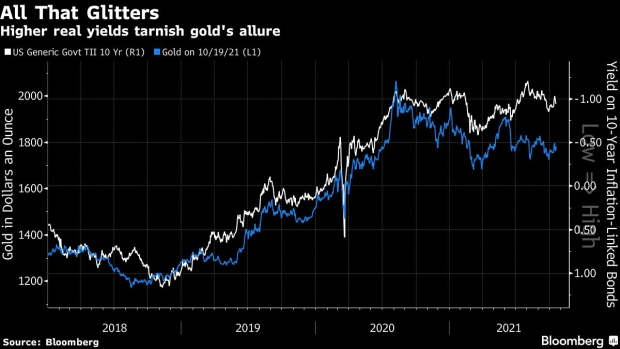 (Bloomberg) -- Money managers are hiking bets on the great inflation trade of 2021, as the biggest risk to price stability in more than a decade rocks corporate boardrooms and Wall Street trading floors.

With supply chains and labor markets tightening anew, the latest Bank of America Corp. survey shows investors have rarely been this overweight assets that gain from rising prices or higher bond yields. This month, 38% of clients are betting the inflation era is here to stay -- a higher level of conviction than the previous month.

Around the world, fund managers keep bidding up banks, leveraged loans and commodities. At the same time, the allure of gold, which has held up since the age of Babylon, is getting tested amid lackluster returns.

Here are the pros and cons for a handful of Wall Street trades.

Inflation that spurs rates higher is typically a boon for banks that can charge higher rates for deposits -- so long as economic expansion is in rude health. Energy firms are also in line to benefit, although their gains may be capped by environmental concerns holding investors back from financing fossil fuels.

Banks claimed the highest allocation in this month’s BofA survey, with fund managers more overweight than at any time since 2018. Overweight bets on energy stocks are at the highest since 2012.

A growing chorus of investors has been pitching leveraged loans as a shield against rising inflation and central bank tightening. Loans offer floating interest rates, which unlike the fixed payments on most conventional bonds, go up as benchmark rates do.

That’s helped returns on the asset class eclipse junk bonds this year in both the U.S. and Europe.

The conventional wisdom is that investing in property is a natural offset -- if prices rise, so do rents, so long as landlords can act fast. While owners of residential properties may be able to jack up rents quickly, commercial property developers tied into long-term leases risk getting left behind.

Bullion may be best known as a time-honored haven from inflation, but that’s only part of the story. One of the best signals for the direction of gold can be found in interest rates adjusted for inflation. When real rates rise, gold falls, and vice versa.

Treasury Inflation Protected Securities, known as TIPS, have lived up to their name with returns of about 4% so this year versus a 3% loss for nominal peers. Payouts from index-linked bonds increase with inflation. There’s also the chance to profit from directional bets that yields will fall and generate price gains, or that breakeven rates -- a market-based gauge of inflation expectations -- will rise.

A perfect hedge? Not necessarily. In the U.K., long maturities means index-linked bonds are highly sensitive to rate risk -- losing some investors money as yields and inflation break out.

Bitcoin has been cited as a potential hedge by analysts at JPMorgan Chase & Co., veteran hedge fund manager Paul Tudor Jones and a legion of hardcore believers in the cryptocurrency’s future as a store of value similar to gold. Meanwhile analysts at Bloomberg Economics say market data suggest Bitcoin has become correlated to inflation worries in recent years -- more so than gold.

Yet clearly there are big speculative forces at play, as the digital currency heads back toward all-time highs on euphoria spurred by the first U.S. exchange-traded fund tracking Bitcoin futures. And while JPMorgan analysts might see an investment case, their boss still thinks the asset is “worthless.”