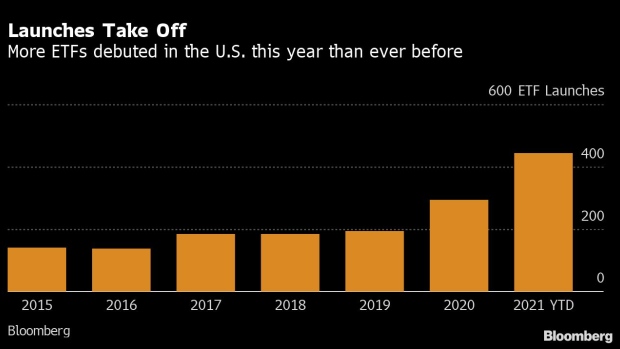 (Bloomberg) -- A big year in the $7 trillion U.S. ETF industry can be summed up by a single trading day in October.

Before the market had even opened, a group of former BlackRock Inc. executives launched a firm looking to shake up the world of credit with seven exchange-traded funds on the way. Then, at the opening bell, the new-product machine cranked into overdrive -- ETFs debuted tracking blockchain, electric vehicles, health care, Chinese innovation, ESG, and more.

And by the end of the day, an application for another high-yield credit fund had landed with the U.S. Securities and Exchange Commission.

The business has never known times like these. A corner of Wall Street already enjoying a reputation for explosive growth has gone supernova, with a record 445 new products in 2021 so far, according to data compiled by Bloomberg.

Behind the rapid expansion is a deluge of new cash as investors chase an economic recovery from the coronavirus, while equity mutual funds fall out of favor. About $900 billion has flowed into the ETF market since the start of the year -- also easily a record. Barely any funds are getting shuttered.

“There’s a lot of money being transferred from a generational standpoint,” said Keith Buchanan, portfolio manager at Globalt Investments. “The stars are aligning right now for the ETF industry to a) evolve very quickly and b) take in flows.”

All that means the number of ETFs Americans can choose from has jumped 19% since the end of 2020. About a quarter of all trading ETFs are less than two-years old, according to Bloomberg Intelligence -- another sign of industry boom times.

September was among the busiest months for debuts ever, with 70 new ETFs -- an average of more than three per trading day. The pace has since moderated, but 120 products have still launched so far in the fourth quarter.

The details of the launches tell a deeper story: From the 445 new arrivals, 75 target fixed income. For the first time, new actively managed ETFs outnumber their passive counterparts with 298 debuts versus 147.

“The letters ETF used to spell passive to most investors,” said Allison Bonds, head of private wealth management at State Street Global Advisors. “Now more and more advisors are realizing that ETFs are no longer just about gaining passive exposure and that active ETFs, particularly within fixed income, make sense because they can gain exposure to experienced bond managers.”

At the same time, launches of low-cost, broad equity-index trackers are dwindling. Traditional core or “beta vehicles” made up only 8% of total equity ETF launches from the start of 2020 through October, according to Bloomberg Intelligence.

Partly, that’s because such core strategies are well represented by big, established and very cheap funds from the major issuers. The popularity of the likes of the SPDR S&P 500 ETF Trust (ticker SPY) and the Vanguard S&P 500 ETF (VOO) mean they still claim the lion’s share of new cash.

Instead, issuers have rushed to offer so-called thematic ETFs, which target trends like automation or electric vehicles rather than traditional industry segments. They’ve proved hugely popular with the retail-investing crowd, which has been a growing force in markets since the pandemic hit. The high-profile success of Cathie Wood’s Ark Investment Management has also helped fuel a wave of copycats.

“You look at the dynamics of who is making these investments on the retail side, it’s not grandma anymore, it’s the grandson in the basement, gaming,” Buchanan said. “And they care about way different things than their grandparents.”

Funds that meet higher environmental, social, and governance standards are among the thematic boom. Investors are increasingly demanding more ethically responsible options, and issuers are rushing to meet the demand. Over 30 ESG ETFs have launched in the U.S. this year.

Aligned with this specialization, funds have been getting more complex. There have been 56 new ETFs this year investing in derivatives to amplify bets, make them inverse or deliver protection. A major driver of this has been the development of defined-outcome ETFs, also know as buffers. They seek to provide capped exposure to gains in exchange for limiting losses.