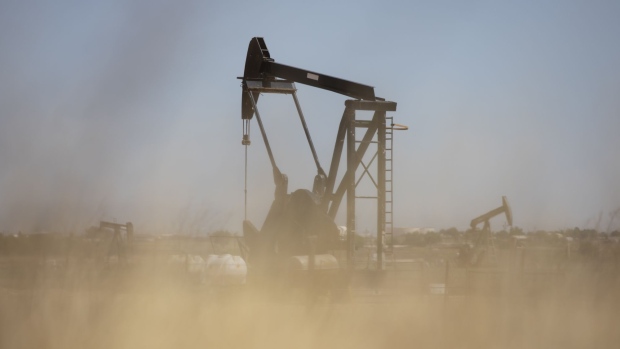 Active pump jacks stand in Midland, Texas, U.S, on Thursday, April 23, 2020. The price for the U.S. benchmark for crude oil, West Texas Intermediate, dropped below zero for the first time in history this month amid a global oil glut. Photographer: Matthew Busch/Bloomberg , Bloomberg

Heger in an interview said that many Wall Street firms have “two thought processes” depending on which clients they deal with, crafting one narrative about divesting from fossil fuels, and another when trying to land business in the oil and gas industry.

Earlier this month he sent requests to major financial services firms like BlackRock Inc. and Invesco Ltd. seeking clarification of their fossil-fuel investment policies and procedures. The probe comes about six months after Texas -- the nation’s No. 1 oil and gas producer -- enacted a law that prohibited government contracts with or certain investments in companies that have shunned fossil-fuel producers.

“If a company on one hand says ‘I’m not investing in oil and gas, it’s a terrible industry,’ but in essence they’re doing business there, you have to ask are you telling the truth or are you making a story up?” he said in an interview in Austin on Wednesday.

“This list will bring light and transparency to what’s truly going on,” Hegar, a Republican, said. “One of the frustrations that I have right now is trying to quantify what does ESG mean?”

Hegar wouldn’t comment on specific companies that will or will not be on the divestment list until the responses have been received and determinations are made. Companies have 60 days after receiving the letter to respond to the inquiry. He said that he’s had conversations with a few firms on their policies, but declined to say which firms he personally spoke with.

“The true narrative of what’s going on needs to be told and I think this will help bring that truth out,” he said. “If I’m going to entrust you with my dollars then I want to make sure you adhere to the policies that we believe.”

Texas has been a flash-point for Republican anger at Wall Street over social issues such as climate change and racial injustice. Lawmakers last year approved legislation intended to punish banks for adopting restrictive gun policies, a move that upended a crucial market for municipal finance. Bank of America, Goldman Sachs Group Inc. and JPMorgan Chase & Co. have halted underwriting for Texas and its municipalities.

Earlier this month a conservative Texas lawmaker warned Citigroup Inc. that it could be barred from underwriting municipal bonds and that company employees could face criminal prosecution unless the bank backs off its policy to pay for workers to travel outside of Texas for an abortion.