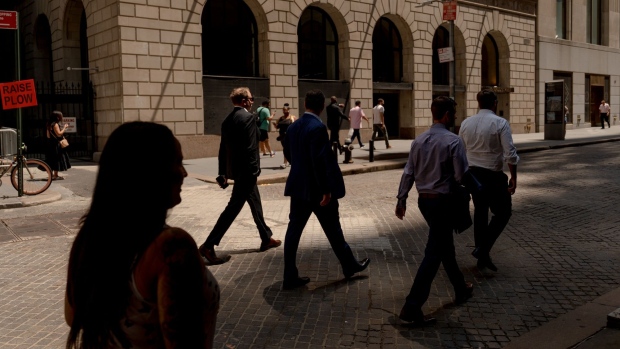 Pedestrians on Wall Street near the New York Stock Exchange during the NYSE Summer Series program in New York, U.S., on Thursday, July 15, 2021. The series, which will run through Labor Day, brings the elements of trading floor excitement at the NYSE to Experience Square, the 7,000-square-foot cobblestone area in front of the historic exchange building on Broad Street in lower Manhattan. , Bloomberg

(Bloomberg) -- New York City’s securities industry reaped another windfall in the first half of the year as it benefited from the pandemic-induced boom in markets -- and that’s projected to boost Wall Street bonuses.

The industry’s pretax profits surged about 13% from a year earlier to $31 billion, helped by strong trading, underwriting and advisory activities, state Comptroller Thomas DiNapoli said Thursday in a report. While it was the industry’s second-most profitable first half on record, DiNapoli cautioned that profits will subside as interest rates rise and monetary stimulus fades.

“Wall Street’s success during the pandemic has benefited New York’s economy and finances during a difficult time,” he said in a statement. “As we prepare for an eventual slowdown in Wall Street’s record activity, we need to ensure New York’s Main Street, and its other vital sectors, are also recovering.”

DiNapoli said bonuses for bankers are expected to rise 6.5% for 2021 from a year earlier, for their third consecutive annual jump. Average salaries including bonuses reached $438,450 last year, the highest of all industries in the city. Banks have been increasing pay to attract new talent and retain existing staff.

The comptroller credited the industry’s strong performance with helping to shore up tax revenues, and said a higher share of its employees had returned to their desks amid the pandemic compared with Manhattan’s overall office workforce.

Still, the trend toward job cuts in the industry is expected to continue after it slashed 3,600 positions last year, a decline of almost 2% and the most since 2009. This year, banks are expected to eliminate 4,900 jobs, DiNapoli said in the report.