Wondering where the dollar’s headed as the U.S. deficit keeps growing? Wall Street’s also trying to figure it out.

Goldman Sachs Group Inc. sees echoes of one of the weakest periods in the greenback’s recent history. Meanwhile, Morgan Stanley thinks it could actually strengthen.

A swelling U.S. current-account deficit is once again a hot debate in the currency market, with implications across asset classes. The gap is the widest since 2008 as a percentage of the economy, and it’s only growing as the U.S. outpaces much of the world in rebounding from the pandemic. The upshot is that more and more dollars are flowing into foreign hands, to either roll back into U.S. assets or be diverted elsewhere.

Experts agree on that much. Where they diverge is on the potential repercussions of the current account, the broadest gauge of trade and investment flows in the largest economy on the planet. Forecasters expect the advance goods-trade deficit, which is due Friday, to set a new record. It’s a crucial time for the world’s primary reserve currency, which has given up all of the gains it posted earlier this year. 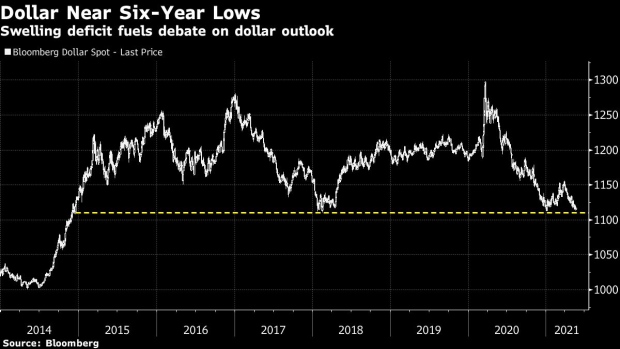 For Goldman, the deficit is key to its bearish dollar view, as the firm’s analysts point to similarities to 2002-2007, when the dollar endured a major slump. Count Deutsche Bank AG in that camp, too.

On the flip side, Morgan Stanley and Eurizon SLJ Capital believe the current environment may mirror the 1980s and 1990s, when the dollar strengthened in the face of large deficits. For now, however, the U.S. currency is weakening and the bears appear to have the upper hand.

“The dollar is expensive on a broad trade-weighted basis, and non-U.S. assets are increasingly offering competitive returns,” said Zach Pandl, Goldman’s co-head of global foreign-exchange and emerging-market strategy. “Investors are likely to rotate out of long-standing U.S. fixed-income and equity markets, resulting in dollar depreciation over time.”

The Bloomberg Dollar Spot Index is down 1.3 per cent this month and is trading near the lowest levels this year. Indeed, the greenback has weakened against half of its Group-of-10 currency peers.

Pandl holds a “structurally negative” view on the dollar over the next three years. Goldman expects the current-account deficit to peak at 4.4 per cent of gross domestic product in late 2021. That’s more than the median estimate of forecasters, who believe it will climb to 3.6 per cent of GDP this year, up from 3.09 per cent at the end of last year and the largest since 2008.

If Goldman’s view on the greenback is right, it would suggest that it’s only a matter of time before foreign investors seek higher-yielding international assets, which would sap the dollar’s strength and potentially usher in a longer-term structural decline that many are predicting. For emerging markets, it could also mean stronger economic growth from the U.S. currency’s inverse correlation with commodities, the boost to local equity prices and the potential deflation of dollar-denominated debt.

In the U.S. fixed-income market, yields on 10-year Treasuries are around 1.60 per cent, which is higher than most developed markets but significantly less than the 3 per cent investors garner for Chinese and Mexican bond equivalents. And while the U.S. stock market continues to hit record highs, Goldman is forecasting lower equity returns versus non-U.S. markets over the next year -- and it expects that the shortfall will also divert flows away from the dollar.

That, however, is not a consensus view. Eurizon SLJ’s Stephen Jen, for example, thinks U.S. economic growth will drive demand for the greenback more than talk of a surging deficit and low-yield environment will hinder it. Bank of America agrees, saying deficits may weigh on the dollar in three to five years, but not now when the economy is beating global peers.

The key to that is the recovery from the pandemic. The U.S. leads major economies in inoculating its population, paving the way for businesses to reopen. Economists forecast that U.S. gross domestic product will grow 6.5 per cent this year compared with a 5.1 per cent average for developed economies.

“A strong U.S. economy ought to attract sufficient global capital to easily finance its large external deficit and in turn support the dollar,” Jen said. “Higher economic growth will mean more profits for U.S. companies and higher inflation, both of which suggest a stronger dollar.”

Those in Jen’s camp argue that when U.S. assets are attractive to the world, the dollar has the capacity to strengthen even as the current-account deficit widens. That’s because foreign investors need dollars to invest in American titans such as Amazon.com Inc., Google parent Alphabet Inc. and Facebook Inc. -- all of which are listed on U.S. stock exchanges.

This isn’t unprecedented. In the 1990s, the U.S. currency advanced amid a surging deficit as the boom in technology startups drew in just about everyone. And during the 1980s, high nominal interest rates lured foreign investors as former Federal Reserve chief Paul Volcker raised the target rate to as high as 20 per cent, helping to buoy the greenback as the current-account deficit surged. 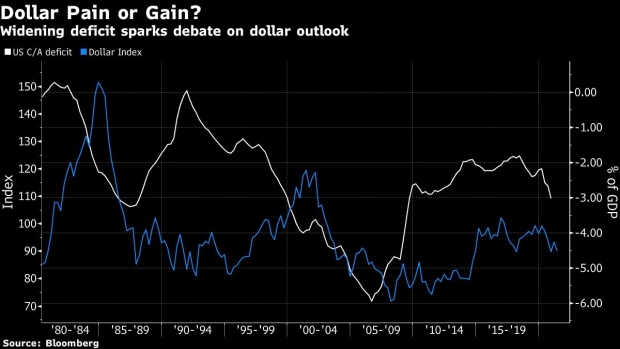 To be sure, contrarians point out that the dollar weakened when the U.S. current-account deficit widened in the mid-2000s. But Morgan Stanley says its historical analysis shows that it’s unclear whether such a relationship holds over time. In a corresponding study of 28 currencies, the relationship between exchange rates and deficits was mixed, strategist Matthew Hornbach and colleagues wrote in a report.

“Because most U.S. trade is invoiced in USD, rising imports shouldn’t generate USD weakness,” they wrote. “Rather, it will be the capital account driving the U.S. dollar, i.e., how will foreign investors respond to the inflow of dollars.”

The latest data tracking the U.S. net international investment position shows that the measure is currently the most negative on record. This indicates investments by foreigners in the U.S. are outpacing those made by Americans in overseas assets by the most yet.

That said, the dollar bears over at Deutsche Bank think there’s a key reason for special concern about the external deficit.

“Its counterpoint is a large fiscal deficit,” which could prove persistent, especially in light of the challenges of containing it in the U.S. political system, Alan Ruskin and colleagues wrote.

Those concerns factor into the bank’s prediction that the euro will climb to 1.30 against the dollar by year-end, up from around 1.22 Thursday, and end at that level in 2022. Meanwhile, leveraged investors remain bearish on the currency after flipping to a net-long position in early May. They’ve been bearish for 10 of the last 16 months.

“A country cannot have a high current-account deficit forever,” said Athanasios Vamvakidis, head of G-10 FX strategy at Bank of America. “To reduce it, you need a weaker currency to reduce imports and increase exports. At some point, this will happen.”