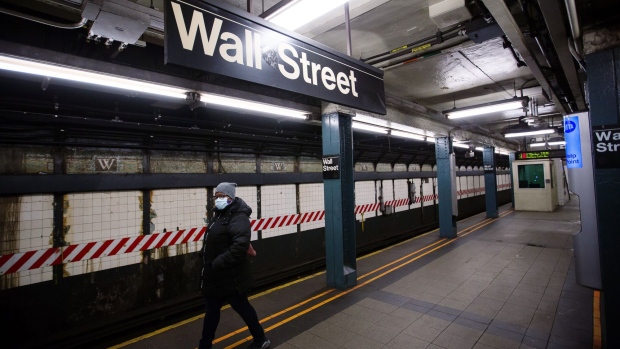 (Bloomberg) -- U.S. bank regulators are poised to resume easing Wall Street rules after spending the past few months carrying out emergency actions to help the economy weather the coronavirus pandemic, according to a newly designated federal watchdog.

Their first steps will include the resumption of work on plans to dial back lenders’ margin requirements by billions of dollars, according to Brian Brooks, acting head of the Office of the Comptroller of the Currency. Some moves could be taken as soon as this month, Brooks said in an interview with Bloomberg.

His agency, along with the Federal Reserve and Federal Deposit Insurance Corp., is also on the verge of finishing an overhaul of Volcker Rule curbs on banks’ involvement in certain investment funds.

Brooks has gotten off to a running start since taking the helm last week after the abrupt departure of Joseph Otting. He made a rule announcement on his first day, and this week issued a statement warning local governments on the risk of lengthy Covid-19 shutdowns. He’s demonstrated a taste for politics less evident in his predecessor, and indicated he may be less comfortable being viewed as an ally of banks than Otting, who referred to bankers as his “customers.”

“Banks aren’t my customers, but banks are the system that I’m in charge of protecting,” Brooks said in the Bloomberg interview, his first since taking the job. “We need the system to work, and my job is to make it work.”

Brooks said that right now the best way to keep it working is for banks to tap more of the capital buffers meant to be used in times of stress. He said that about $60 billion is waiting on the sidelines in the special capital cushions banks maintain, and that he hopes to make lenders feel more comfortable about deploying some of it.

Like Otting -- who stepped down after finishing his top policy goal of overhauling the Community Reinvestment Act -- Brooks was a former executive at OneWest Bank. Treasury Secretary Steven Mnuchin owned the bank along with a group of investors before selling to CIT Group Inc.

But where Brooks is very different than Otting is in his depth of experience in Washington, where he’s worked as a lawyer and a senior executive at Fannie Mae.

While the OCC is supposed to work in concert with the Fed and FDIC on oversight of the U.S. banking industry, there have been some recent divisions. A leverage rule that the Fed and OCC advanced without the FDIC two years ago remains unfinished. And Otting went solo on the CRA overhaul last month, leaving compliance questions for banks facing competing regulations.

Brooks said he’s willing to discuss any criticisms that people have about the OCC’s version of the CRA rule, and indicated he will continue to advocate for it on the FDIC board, which includes the comptroller of the currency as an automatic member.

Having come to the OCC after serving as the top lawyer at Coinbase Inc., Brooks has wide experience with financial technology firms. One of his personal initiatives is to be the “first fintech comptroller.”

“I think we can charter a number of institutions, some of whom are current applicants that have their roots in technology,” he said. After approving full bank charters for firms that are “fairly far along in the pipeline,” the OCC will further explore more specialized fintech charters and charters for payments firms, he said.

Brooks drew complaints from consumer advocates for his warning to local officials about the potential damage of lengthy shutdowns due to coronavirus concerns. He said he was just trying to ensure that governors and mayors are considering the threat to their communities of insisting they remain closed for an extended period.

Mnuchin installed Brooks at the OCC -- an independent agency within the Treasury Department -- earlier this year in such a way that he’d automatically be acting comptroller when Otting left. Brooks, who called Mnuchin a friend he’s worked with “for a long time,” said he didn’t take the job to fulfill personal ambitions, but he said he’d be honored if President Donald Trump nominated him for the position.

“That’s up to the president and the secretary,” he said.

While Otting returned quickly to his Las Vegas area home after stepping down, Brooks is more of a Washington fixture. He’s even known around town for his work behind the keyboard in the Johnny Esquire Band, which plays classic rock at charity events. Brooks has already invited Federal Reserve Chairman Jerome Powell, who plays guitar, to join him in a gig someday, he said, laughing.