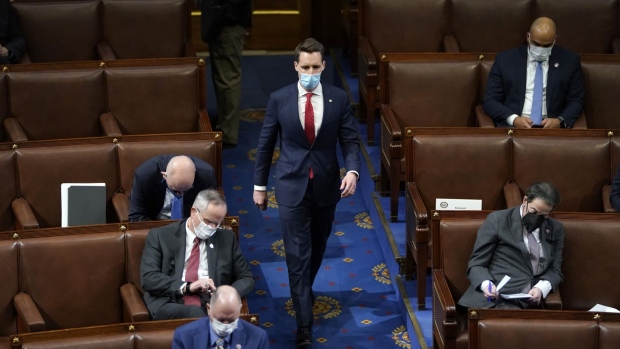 Senator Josh Hawley, a Republican from Missouri, wears a protective mask while arriving to a joint session of Congress to count the Electoral College votes of the 2020 presidential election in the House Chamber in Washington, D.C., U.S., on Wednesday, Jan. 6, 2021. The House and Senate resumed a politically charged debate over the legitimacy of the presidential election hours after a pro-Trump mob stormed the U.S. Capitol and drove lawmakers from their chambers. , Bloomberg

For years Wall Street has sprinkled money all across U.S. politics to make and keep friends in Washington. Now, it’s rethinking the consequences.

After the deadly siege on Capitol Hill last week, major banks are reassessing, reducing and in many cases suspending their campaign contributions. Some are vowing to pull back from candidates who appeared to support the attempted insurrection.

The moves represent a sharp break with the past and come as leaders across corporate America are rushing to distance themselves from President Donald Trump. Big business largely embraced Trump’s efforts to cut taxes and roll back regulations despite, in some cases, reservations about his personal character. That’s changing in the wake of the violent attack last week.

“A lot of business people don’t want to get involved because they don’t want to bring politics to the workplace,” said Tom Glocer, Morgan Stanley’s lead independent director. “This goes beyond the politics.”

Morgan Stanley singled out members of Congress who opposed the move to certify President-elect Joe Biden’s election win, pausing its contributions to them. Goldman Sachs Group Inc. will probably curtail donations to leaders who tried to block the election result as well. JPMorgan Chase & Co. and Citigroup Inc. took a broader swipe, suspending all their donations for now.

Stopping short of such steps, Bank of America Corp. said it will take recent events into consideration before any future donations. And Wells Fargo & Co. said it’s still reviewing its policies on political giving.

The biggest U.S. banks contributed about US$5.7 million via their political action committees in the 2020 election cycle, according to the Center for Responsive Politics.

Some of the industry’s backlash to the violence singled out Republican Senator Josh Hawley of Missouri, who supported Trump’s claims that his election loss to President-elect Joe Biden was the result of fraud. Hawley was seen saluting protesters with a fist pump before they stormed the Capitol on Wednesday.

Glocer said he was particularly alarmed by the actions of Hawley, a fellow Yale Law School graduate.

“That drove me beyond the pale,” Glocer said.

“We want you to be assured that we will not support candidates who do not respect the rule of law,” Wolff said in a memo to employees.

Peter Scher, JPMorgan’s head of corporate responsibility, said the focus of business, political and civic leaders now should be on governing and getting help to those in need.

“There will be plenty of time for campaigning later,” Scher said in a statement Sunday.

U.S. Representative Katie Porter, a Democrat from California, said banks should go further than just a temporary halt to their campaign contributions.

“If JPMorgan is serious about change, they should shut down their PAC instead of this short-lived PR stunt,” Porter wrote in a tweet, referring to the company’s political action committee.

I’ve never taken corporate PAC money, including from Wall Street banks, because our grassroots movement is people-powered. If JP Morgan is serious about change, they should shut down their PAC instead of this short-lived PR stunt. https://t.co/2jxj6GAyig

American Express Co. said in a statement Monday that its PAC wouldn’t support congressional members who tried “to subvert the presidential election results and disrupt the peaceful transition of power.” Mastercard Inc. made a similar announcement, saying its PAC would review all political contributions and the company will suspend giving to lawmakers who opposed certification of the election results.

The American Investment Council, a private equity industry trade group, said it’s halting all political donations. The AIC, with headquarters about 2 miles from the Capitol, is backed by some of the largest private equity firms, including Carlyle Group Inc., Apollo Global Management Inc. and Blackstone Group Inc.

Former Goldman Sachs Chief Executive Officer Lloyd Blankfein took the financial industry to task for failing to speak out sooner against Trump, whose administration juiced Wall Street profits but is now winding down in violence.

“If you are willing to overlook bad character because they do good things for you, then that comes back to bite you,” Blankfein, who retired as Goldman’s CEO in 2018, said in an interview last week. “Trump was doing a lot of good things, but all the while he was showing such poor character.”