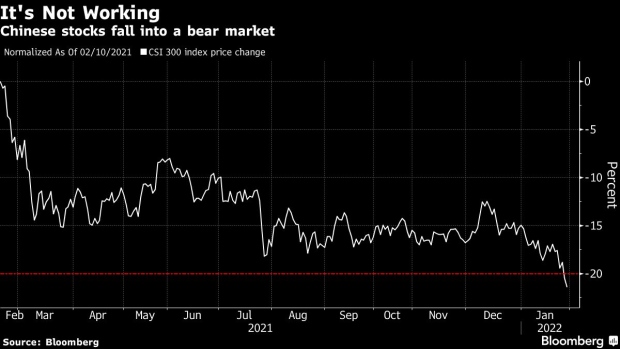 (Bloomberg) -- The bar for China’s financial markets to do better this year was so low, virtually everyone on Wall Street was saying the country’s stocks and bonds could only go up.

That bet isn’t going so well. Mainland equities just entered their first bear market since Donald Trump’s trade war. Shares in Hong Kong had their worst week in five months, with short sellers feasting like never before. Credit-market contagion is spreading to some of the strongest property developers for the first time. Assets that were previously resilient like China’s currency and government bonds are no longer immune, with the yuan turning the most volatile since August.

While it’s still only January, mounting losses are testing the ability of policy makers in Beijing to support markets after the chief securities regulator vowed to “firmly” prevent volatility. It’s also confounding those on Wall Street who predicted easier policy out of Beijing would be the catalyst needed to revive Chinese beaten-down assets. Authorities have cut interest rates and pledged to do more to support the economy.

Signs of Beijing’s unease over the equity market slump are showing up visible measures of support -- from front-page articles in state media appealing for calm to some of China’s largest mutual funds publicly committing to buying their own equity-focused products. The country’s central bank has stepped up its liquidity injections in recent days to see lenders through the seasonal Lunar New Year cash crunch. More targeted intervention is possible as the Communist Party prioritizes stability before the Winter Olympics and in the final months of President Xi Jinping’s second term.

“Consensus is expecting that there will be support for the Chinese economy and markets -- and for us that makes sense,” Paul Gambles, co-founder and managing partner of MBMG Group, told Bloomberg TV on Friday. “But making sense of Chinese markets? That’s a bit of a tough task. It’s a hard call for anyone.”

It can be dangerous to stay long China into a holiday. In 2020 the country’s markets were shut as the Covid-19 pandemic spread from Wuhan -- and the reopen was so brutal that more than 1,000 stocks had to be halted. It was similar in 2019 when a series of tweets from then-President Donald Trump signaled an escalation in the U.S.-China trade war. Mainland markets will be shut all of next week.

There are plenty of reasons for caution. China’s efforts to maintain its zero-Covid policy are coming under increasing strain. City-wide lockdowns may undermine consumer spending during the key holiday season. The slowdown in the property market, which makes up about a quarter of gross domestic output, is far from over. A rapid withdrawal of stimulus by some countries could also hurt China’s exports -- a key driver of growth in the past two years.

Investors also remain vulnerable to the Communist Party’s opaque and unpredictable policy making. Hopes that Beijing was nearing the end of a crackdown on the technology sector were dashed when China vowed to curb the influence of such companies in a sweeping communique on corruption. Optimism that Beijing was dialing back on its property crackdown has been replaced with skepticism. There’s still nervousness over the future of tutoring companies. A new nationwide campaign on money laundering has raised more uncertainty over where the government will strike next.

Traders are paring risk. The CSI 300 Index of mainland stocks fell 1.2% on Friday, closing at the lowest level in 16 months, while the MSCI China Index is at the lowest since May 2020. Stock-market leverage has dropped for eight straight days.

China high-yield dollar bonds fell as much as 5 cents on the dollar Friday, according to credit traders. Overseas selling of onshore shares continued after Thursday’s $2.3 billion outflows, one of the largest since trading links were expanded in 2016. That weighed on the yuan, which slumped the most since July. Short selling comprised about a fifth of Hong Kong’s total stock turnover on Thursday, the biggest proportion on record.

The commitment from at least 12 mutual funds to funnel cash into the stock market is likely to have been coordinated. A series of front-page articles in state media have touted the attractiveness of Chinese stocks, with the Securities Times calling the act of the funds “setting a good example.” Newspapers had already appealed for calm earlier in the week.

Most of Wall Street is counting on a 2022 rally in China. Societe Generale SA, Goldman Sachs Group Inc., BlackRock Inc., UBS Group AG and HSBC Holdings Plc have all turned overweight on Chinese equities. JPMorgan Chase & Co.’s Marko Kolanovic in December recommended going all in on China this year, predicting the MSCI China Index would surge almost 40%. Morgan Stanley’s Jonathan Garner is the notable holdout, saying there may be more pain in store for Chinese shares.

There’s still plenty of time for bulls to be right. More stimulus is expected from China’s central bank after it pledged to open its monetary policy tool box. Any sign Beijing is loosening funding restrictions for property developers would go a long way toward lifting sentiment. A weakening yuan wouldn’t be bad news if exports come under pressure.