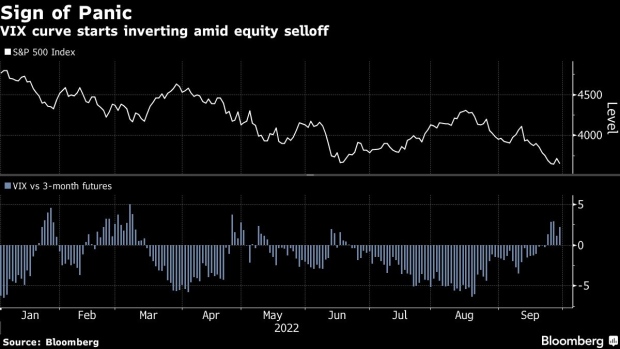 (Bloomberg) -- Wall Street’s widely followed gauge of fear is finally showing signs of panic as the S&P 500 careens to a fresh bear-market low.

The Cboe Volatility Index, or VIX, rose 2.06 to 32.24 as of 12:29 p.m. in New York, as the equity index dropped as much as 2.7% on concern over Federal Reserve tightening and policy chaos in UK. Until Monday, the VIX hadn’t pierced 30 since June. It’s been there every day this week.

Traders are betting on more turbulence in the short term than they are three months ahead, making it more expensive to trade VIX contracts now.

Normally, they’re more expensive the further into the future. Now, the VIX curve has been inverted over five straight sessions including the 2% equity rebound on Wednesday. That’s a stretch of inversion not seen since May.

Such a setup is sometimes viewed as a positive sign for those hoping that markets will soon calm down. Similar inversions have occurred five other times this year, all presaging equity bounces, albeit short lived. That’s what counts as good news these days as rising interest rates spark fear and loathing across asset classes.

“We want to see the VIX stay above 30 for at least a few more days to confirm stocks are at a tradeable low,” said Nicholas Colas, co-founder of DataTrek Research.

The S&P 500 fell for a seventh session in eight, as St. Louis Fed President James Bullard didn’t back down from his hawkish stance and said investors have now understood that they can’t escape additional rate hikes in coming months. Meanwhile, CarMax Inc. tumbled in the latest earnings miss that revived concerns about consumer confidence.

Despite latest inversion, however, the VIX’s move still pales in comparison to volatility measures in fixed income and currency markets. The ICE BofA MOVE Index, a similar gauge for Treasury options, for instance, has more than doubled this year and on Thursday hit the highest level since the pandemic crash. By contrast, the VIX has yet to take out its June peak.

“If currency and bond vol just calms down, expect some continuation of a bounce,” said Dennis DeBusschere, the founder of 22V Research.