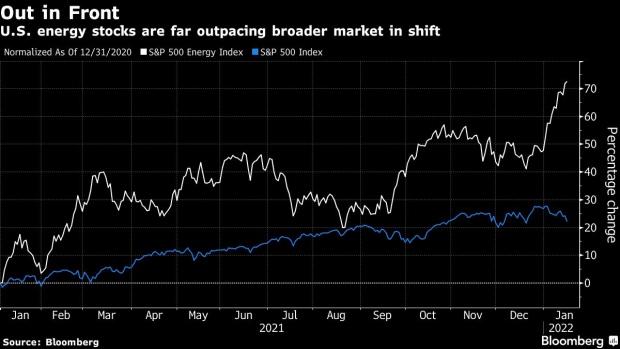 (Bloomberg) -- Wall Street’s biggest investors are welcoming back oil and gas stocks, and not just because of their knock-out performance over the past 18 months.

“Foresighted companies across a wide range of carbon intensive sectors are transforming their businesses, and their actions are a critical part of decarbonization,” Fink said. “Driving capital towards these phoenixes will be essential to achieving a net-zero world.”

It’s been easy for fund managers to sell out or ignore energy stocks for much of the last decade as their unwillingness to address climate change was matched by woeful financial performance. Energy slumped from 12% of the S&P 500 Index a decade ago to about 2% towards the end of 2020, but has since staged a comeback due to surging oil and gas prices.

Seven of the top 10 performers in the S&P 500 are oil stocks, which added to outsized gains last year. Most U.S. oil companies have transformed their business model since the pandemic to focus on generating free cash flow rather than expensively growing production at a cost to shareholders and the environment. Fink emphasized that divesting from fossil fuels, as many endowment funds such as Harvard University have done, won’t drive the world toward low carbon.

“Thank God for the oil producers” for providing reliable supply, Dalio said Monday on a panel at the Abu Dhabi Sustainability Week summit. Cutting off financing to them and moving too quickly on the energy transition would only fuel inflation, he said.