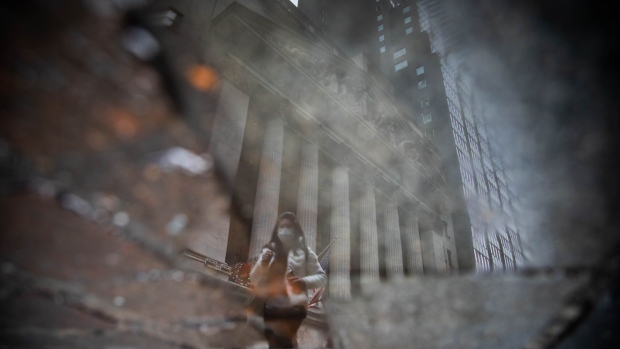 A pedestrian reflected in a puddle outside the New York Stock Exchange (NYSE) in New York, U.S., on Friday, Dec. 31, 2021. U.S. stocks swung between gains and losses, with moves exacerbated by thin trading on the last session of the year. , Bloomberg

(Bloomberg) -- Wall Street’s push to refill office towers across the country has been derailed again.

This time it’s the highly transmissible omicron variant of the Covid-19 virus that’s forced executives to rethink their plans. A record 10 million people were diagnosed with Covid-19 in the seven days through Sunday, almost twice the pandemic’s previous weekly high, though weekly deaths continued to drop.

“Realistically, we do not foresee us all having a safe opportunity to be together in our offices until at least Monday January 31,” Jefferies Financial Group Inc. Chief Executive Officer Richard Handler said in a memo on Instagram. “We are encouraging everyone to work remotely unless there is a very good reason to be in our office.”

The country’s largest banks have been among the most aggressive in luring workers back to their desks, with many beginning that process last summer. But the push has come in fits and starts as new variants have developed and pushed cases higher.

--Bank of America Corp. urged staffers to work from home this week.

--Citigroup Inc. began asking employees in the New York metropolitan area to work remotely over the holidays. Last week, it expanded that guidance and asked staffers across the U.S. to work from home for the first few weeks of the new year if they were able to do so, citing the rise in Covid cases due to omicron.

“We will continue to monitor the data and provide an update in January on when we expect to be back in the office in a similar manner as we have been,” Citigroup said in a memo.

--Goldman Sachs Group Inc. reversed its stance on keeping staff in its offices and asked all U.S. employees to work from home if they can until Jan. 18. Last month, the firm also told employees that anyone entering its offices must get a vaccination booster by Feb. 1 if they’re eligible for the injections by that date.

--JPMorgan Chase & Co., one of Wall Street’s staunchest advocates for returning bankers to the office, told employees they could work from home at their managers’ discretion in the first few weeks of the year. Staffers are expected to resume their in-office schedules by Feb. 1.

--Morgan Stanley has allowed different teams to decide whether their staffers should be returning to the office, but many are discouraging employees from coming in.

--Wells Fargo & Co. postponed its plans for returning workers to offices indefinitely. The bank had planned to start bringing them back beginning Jan. 10.

--Jefferies Financial Group Inc. told staffers they probably won’t be reopening offices until Jan. 31 at the earliest. The firm also said it doesn’t want the company to host indoor group events, dinners or functions this month. Staffers who wish to be in the office or meet with clients must get their booster shot of the Covid-19 vaccine.

“While nobody knows for sure, we believe (and fervently hope) this could be the last truly challenging period of this pandemic,” Handler and President Brian Friedman said in a memo to staff. “However, for now, we ask each of you to prioritize safety, stay optimistic, reach out for help when needed and be there for all of those in need.”