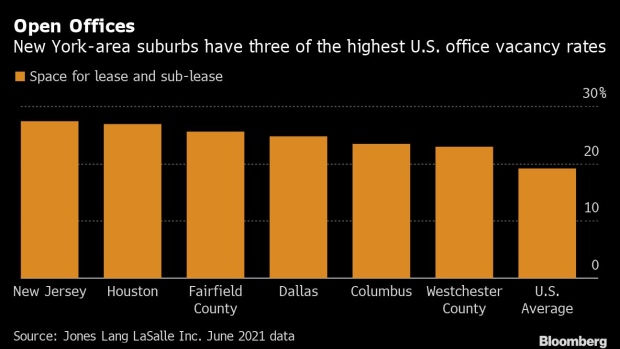 (Bloomberg) -- It was a tantalizing idea early in the pandemic: With New York skyscrapers emptied and bankers hunkered down in homes outside the city, a handful of finance firms decided to scout alternate office locations in areas like New Jersey, Stamford and Long Island.

That interest has fizzled.

Much to the dismay of suburban brokers and landlords, the prospect of outposts in outlying areas failed to translate into deals. Instead, major Wall Street firms have ramped up return-to-office plans at their major hubs.

A pandemic shift would have been a boost for the region’s long-suffering suburban campuses, where vacancies have grown for decades as big finance companies opt to focus on their Manhattan towers. But unlike the housing market, where demand has soared for suburban homes to accommodate people who’ve grown accustomed to job flexibility and bigger spaces, the office market in areas surrounding New York has stagnated or worsened.

Citigroup Inc. paused its search for short-term suburban satellite offices a few months ago to reassess its workplace strategy in Manhattan, according to people familiar with the matter, who asked not to be named because the matter is private. The bank last year was considering temporary space in New Jersey, Long Island and Westchester, New York, to ride out the pandemic, catering to employees who lived there.

A spokesperson for Citigroup declined to comment. The bank has said it expects almost all employees back at least part of the time starting in September.

With workers sprawled to outer regions, opening satellite locations seemingly makes sense. But executives who want employees back in offices often cite the need for fostering collaboration, corporate culture and training. Those interactions can be easier at a main hub. Many companies also are looking at flexible work schedules, so people can commute to Manhattan on some days and stay home on others.

The rise of job flexibility also has some companies re-evaluating their real estate needs and potentially cutting space. Few are in a rush to make big office moves, said Nicole LaRusso, CBRE Group Inc.’s director of research for the New York region.

“It’s going to take time for occupiers to figure out the best solution based on not only where people have settled from a residential standpoint, but also how much time they need to be in the office,” she said.

New Jersey had the highest U.S. office vacancy rate at the end of June, with 27.3% of space available for lease or sublease, according to Jones Lang LaSalle Inc. Fairfield County, Connecticut, which includes Stamford, ranked third and New York’s Westchester County was sixth among markets with the biggest shares of empty offices.

The notable exception is Greenwich, the tony Connecticut suburb that’s known as a hedge fund capital. The city’s downtown was the only market in Fairfield County that saw asking rents rise in the first quarter. But interest in offices has largely come from private equity firms and fund managers seeking to set up small outposts, rather than big banks needing large blocks of space, said James Ritman, a Connecticut-based executive vice president at Newmark Group.

For many companies, offices in the suburbs were meant to be a short-term option during the pandemic. But with the widespread availability of vaccines, firms including JPMorgan Chase & Co. and Goldman Sachs Group Inc. have already called employees back to their desks. Others are looking to a return after Labor Day.

“When these firms were looking, they weren’t sure when things were going to open back up,” Ritman said. “A lot of it was put on pause because suddenly, it didn’t seem like a three-year horizon, more like one year to 18 months tops.”

One outgrowth of the pandemic is that tenants are seeking buildings with better locations, amenities and air-filtration systems. That’s another strike against aging suburban campuses.

Banks also are rethinking the redundancy centers they’ve long kept as backup sites in case a natural disaster or terrorist attack leaves them unable to get to the office. Now, they can simply send workers home.

“Office demand is increasingly focused on higher-quality properties,” said Nancy Muscatello, managing consultant with CoStar Group Inc. “That’s a trend we expect to continue coming out of the pandemic as well.”

Instead of expanding into New York suburbs, some banks are looking at lower-cost Sun Belt markets. Office leasing in Atlanta, Miami and Austin, Texas, has returned to pre-pandemic levels while much of the rest of the country is still in the early recovery stages, according to Jones Lang LaSalle. Goldman Sachs is exploring new offices in Dallas and Florida’s West Palm Beach.

Suburban brokers in the New York area are still optimistic that once employers have a clearer view of their office strategies, some may look outside the city again.

“A lot of decisions now aren’t Covid-related, it’s really following employees, and such a large basis of employees moved out here,” said Ritman, the Connecticut broker. “Employers will be considering whether people will commute in or if they’ll have offices close to people.”