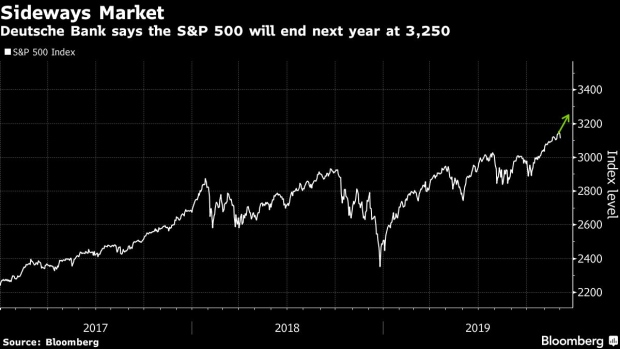 (Bloomberg) -- Binky Chadha, the biggest equity bull whose 2019 S&P 500 target has so far been among the most accurate on Wall Street, is sticking to the same number for next year.

The chief global strategist at Deutsche Bank forecast the benchmark index will end 2020 at 3,250, the same level he predicted for this year. That’s about 4% from Monday’s close. With four weeks left in 2019, Chadha’s forecast is the second-closest to coming true among all strategist projections that were made in January, behind JPMorgan Chase & Co.’s Dubravko Lakos-Bujas, data compiled by Bloomberg show.

While chart patterns flash a bullish signal, Chadha is taming his optimism because of stretched valuations. After a rally of more than 20% in 2019, the S&P 500 trades at 19.1 times earnings. The market has traded below that level about 90% of the time over the past 85 years. The current valuation reflects an expected rebound in earnings growth of about 15%, Deutsche Bank data showed.

But the pick-up in profits will be much slower than that, Chadha said, predicting S&P 500 earnings will grow 6% to $175 a share next year. Meanwhile, a reduction in company share buybacks, the U.S. presidential elections and lingering trade risks are likely to put a lid on multiples investors are willing to pay for stocks, he said.

“The U.S. presidential election should make it difficult for the fundamental uncertainty emanating from U.S. trade policy, which has plagued corporates and been a key driver of the U.S. and global growth slowdowns, to dissipate completely,” Chadha wrote in a note Monday. “This argues for a break in the downward trajectory of growth and some bounce, not a rebound to the peaks of this cycle as the market is pricing.”

Chadha is the latest strategist to warn that the momentum behind the S&P 500 will be hard to sustain, Among professional forecasters tracked by Bloomberg who have provided their forecasts for next year, three expect the S&P 500 to be lower by the end of next December. Even the most optimistic, Jonathan Golub at Credit Suisse, projected gains running at less than half the rate seen so far in 2019. His target stands at 3,425, implying a 10% increase.

To contact the editors responsible for this story: Brad Olesen at bolesen3@bloomberg.net, Richard Richtmyer, Joanna Ossinger