Bank of America Corp. sparked a stir in January -- and a little envy -- with just a few lines of disclosure in its fourth-quarter earnings report.

The lender revealed it had slashed its 2020 corporate tax rate to 5.8 per cent from what would have been 21 per cent, thanks to finance work involving environmental, social and governance projects. That didn’t go unnoticed by Bank of America’s competitors.

Executives at one large regional bank saw it, and talked to Bryen Alperin, director of renewable energy for tax specialist Foss & Co.

“Wow, look at that,” the company told him, he said. “Maybe we should be doing this.”

In fact, pretty much everyone is. This month, JPMorgan Chase & Co. announced a pledge to finance and facilitate at least US$2.5 trillion of sustainable and climate-friendly deals over the next decade, Bank of America set a target of US$1.5 trillion, and Citigroup Inc. and Morgan Stanley said they would be mobilizing US$1 trillion each. Meet Wall Street’s new trillion-dollar ESG club. The banks created it, analysts say, to please regulators, impress shareholders and activists, do some good -- and cut their tax bills.

“The writing’s on the wall, things are going to change and the banks need to be out in front of that,” said Christopher Wolfe, who analyzes banks for Fitch Ratings Inc. Read more about the trillions pledged toward climate, sustainabilityWolfe wasn’t just referring to the shift in attitudes about energy and the climate, but also prospects for a tax overhaul the Biden administration is proposing that could raise levies on big corporations to 28 per cent from 21 per cent. When Donald Trump slashed taxes in 2017, he handed a US$32 billion windfall to the biggest U.S. banks, which will look for ways to cope if tax rates now reverse course. Biden's infrastructure plan calls for an expansion of tax credits for low-income housing, energy-efficient buildings and renewable energy, and that could boost the finance industry's options.

Bank of America’s annual report cited tax credits offered by U.S. law to investors in projects including affordable housing and renewable energy, which “generally involve substantial pretax losses.” They saved the bank US$3 billion on its tax bill last year, it said.

The trillion-dollar announcements from the banks aren’t brand new or even strictly green. Bank of America's new pledge, which includes US$1 trillion in an environmental-business initiative, boosted a US$300 billion commitment it made in 2019. As one example of its work, the bank cited a US$1 billion bond “to support those on the front lines of the coronavirus health crisis.” Read how new U.S. climate goals fall short of European peers, Paris target

JPMorgan, which had already committed to US$200 billion of sustainable financing for 2020, says its new goal includes US$1 trillion for green initiatives, plus deals that will boost “quality of life in developing countries” and “advance economic inclusion in developed markets.”

Morgan Stanley, which promised US$250 billion in low-carbon financing three years ago, tripled that goal this month while also increasing other social-development goals. And Citigroup extended its environmental-finance target to US$500 billion by 2030 from US$250 billion by 2025. An additional US$500 billion will go to “investments in education, affordable housing, health care, economic inclusion, community finance, international-development finance, racial and ethnic diversity, and gender equality.” The banks declined to comment.

The promises on clean energy are the flip side of the industry’s other major role in the climate crisis. Banks extended more than US$3.9 trillion of loans and underwriting services to fossil-fuel companies since the start of 2016, according to data compiled by Bloomberg. JPMorgan, Wells Fargo & Co. and Citigroup were the industry’s top three, the data show, lending and underwriting a combined US$638 billion. 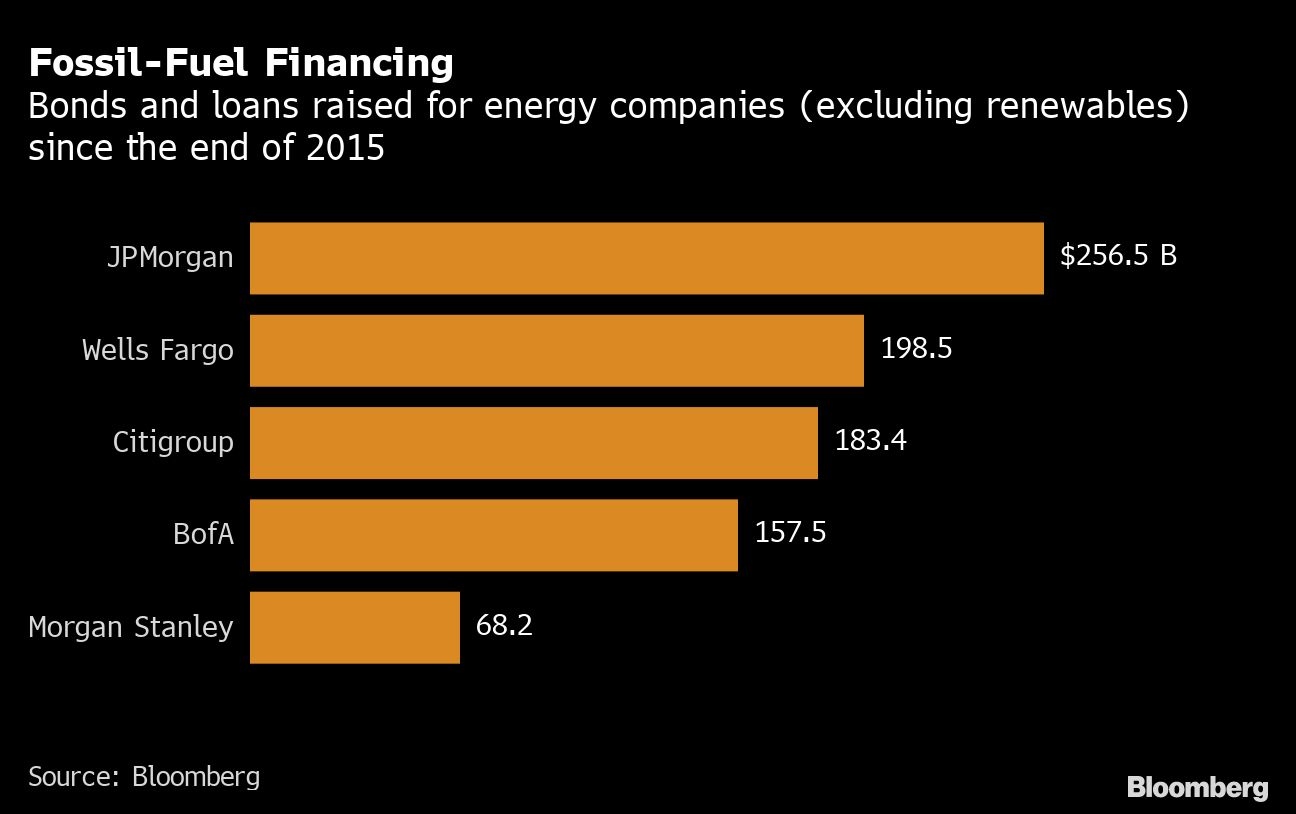 Citigroup and Morgan Stanley were among more than 40 global banks that signed a pledge to cut pollution from portfolios and reach net-zero emissions by 2050. The announcement Wednesday from the Glasgow Financial Alliance for Net Zero, led by former Bank of England Governor Mark Carney, came ahead of President Joe Biden’s global summit on the climate. Earlier this month, investors managing US$11 trillion called on the world’s biggest banks to phase out financing of fossil-fuel companies and back the goals of the Paris climate agreement.

Brett Fleishman, who runs fossil-finance campaigns for the nonprofit 350.org, said that’s where Wall Street should turn its attention, rather than the raft of trillion-dollar pledges in recent months.

“The single most important thing banks and other financial institutions can do to address climate change and advance sustainable development is to phase out its fossil and deforestation financing -- starting immediately,” Fleishman said. “Wall Street is driving the climate crisis.”

Justin Guay, who directs global climate strategy at the Sunrise Project, will be watching how the banks use the money they've pledged.

“Everyone has a different definition of what is sustainable,” Guay said. “Given how much money they invest in fossil fuels, I think the onus is on them to prove that none of these investments in any way, shape or form are just repackaged, green-washed fossil-fuel investments.”Jane Fraser, Citigroup’s new chief executive officer, spoke at the White House’s Leaders Summit on Climate on Thursday.

“I can assure you,” she said, “whether it’s the drive to net zero, or the other important parts of our ESG agenda -- including closing the gender pay gap and promoting racial equity -- we are backing up our commitments with real action and measurable results.’’