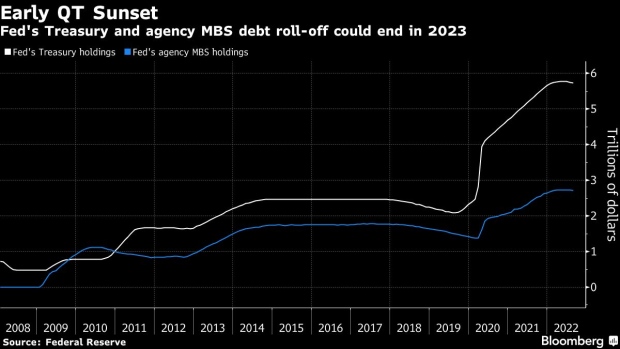 (Bloomberg) -- The Federal Reserve is penciling in at least another couple of years of running down its bond portfolio of around $8 trillion. But observers are increasingly predicting it will end a whole lot sooner than that.

Even before the Fed’s balance-sheet runoff plan, known as quantitative tightening, gets up to full speed in September -- at a monthly clip of up to $95 billion, or over $1.1 trillion a year -- two camps of economists and strategists have emerged predicting an early end, at some point in 2023.

One group says the central bank will have to abandon QT as early as next year, when it turns to cutting rates to combat an economic downturn -- unwinding some of the aggressive monetary tightening now under way to combat hot inflation.

“The Fed will want to ensure their policy tools are rowing in the same direction,” said Matthew Luzzetti, chief US economist at Deutsche Bank AG. “They won’t want to be sending mixed signals,” said Luzzetti, who predicts the Fed will both start cutting rates and end QT in September 2023.

A second group sees an early end for reasons not unlike those that drove the Fed to halt its last effort at QT, in 2019: essentially, taking too much liquidity out of the US banking system. Scarcity in bank reserves is blamed for causing turmoil in financial markets back then, the only other experience the Fed and investors had with QT.

The $95 billion monthly maximum reduction in the Fed’s portfolio -- $60 billion of Treasuries and $35 billion of mortgage securities -- will be almost double the cap of $50 billion last time.

By early 2023, the Fed will be at risk of overdoing it, according to strategists at Barclays Plc.

An early tapering or end to the program could remove some of the upward pressure on long-term Treasury yields by reducing the extra amount of debt that the federal government would need to raise from the private sector. Bank of America estimates that, if the Fed halted QT in September 2023, then the Treasury would likely have $630 billion less in debt issuance to the public for the 2024 fiscal year than if they kept going.

Fed Chairman Jerome Powell said last month that the central bank’s model “would suggest that it could be between two, two and a half years” for the balance sheet to get to a “new equilibrium.” The balance sheet more than doubled during the pandemic, to almost $9 trillion earlier this year, as the Fed again used quantitative easing as a crisis-fighting tool.

Not everybody disagrees with Powell’s suggested timeline.

“I still see QT ending at Powell’s stated horizon as the baseline.”

“With our view that the Fed will have to raise rates to 5% in 2023 and stay at that level due to sticky inflation, it means that there is considerable room in 2024 to reduce interest rates before needing to resort to balance-sheet expansion again.”

The scheduled pace would see the Fed’s balance sheet shrink to $6.5 trillion by the first quarter of 2025, estimated Jay Bryson, global economist at Wells Fargo & Co.

“If the economy does go into recession the Fed will stop QT well short of reaching that $6.5 trillion level,” Bryson said. “And arguably, depending on how bad the recession is they could even start to do QE again,” though that’s not what he’s forecasting now.

What’s the future of the embattled 60/40 investment portfolio, which has taken such a beating this year. Share your thoughts through the latest MLIV Pulse survey.

Just as there are marked disagreements over how much more the Fed will raise rates, how damaging a possible US recession may be and where inflation is headed over the next year or two, there are many scenarios for QT.

Making things all the tougher to game out is the complexity of the mechanism, which sees the Fed let some bonds mature without replacement -- forcing the Treasury to sell more debt to the private sector, which in turn drains liquidity from the financial system. For now, the Treasury has been cutting note and bond sales, largely to boost issuance of in-demand bills.

That liquidity can be drained ultimately in two ways: either from bank reserves parked at the Fed, or a drawdown of money funds placed in the Fed’s so-called reverse-repo facility, or RRP.

Because the RRP is less directly connected to the banking system, analysts considered it wouldn’t be as impactful if Fed QT ended up draining that first. It also has more than $2 trillion of cash parked in it, on an overnight basis, from money-market and other funds.

But lately, some Fed watchers have switched to thinking QT will have more of an impact on bank reserves, potentially forcing an early end. Stocks slid in December 2018 when some traders said the Fed was taking too much out of the system, and the repo market was roiled the following summer.

“The drainage of reserves is very aggressive,” said Pablo Villanueva, a senior US economist at UBS Securities. “That will lead the Fed to have to stop QT or slow down QT earlier than originally planned,” he said, predicting a winding down as soon as late 2023.

Derek Tang, an economist at LH Meyer in Washington, said one option for the Fed next year could be to keep offloading its mortgage-backed securities at pace, while slowing the runoff of Treasuries.

“They’ll probably end their rate-hike campaign in the first quarter, and if by the second quarter they want to taper down the runoff, then I think they can afford to do so,” Tang said.

(Updates with Bank of America estimate on reduction in Treasury debt issuance, in eighth paragraph.)