It's a bear market, use today's rally to shed some of your long equity positions: Dennis Gartman

Firms from HSBC Holdings Plc to Credit Suisse Group AG are skeptical that the S&P 500 Index has reached its ultimate low and warning that U.S. equity prices still don’t fully reflect the risks of higher interest rates on earnings and valuations. Aggressive tightening by the Federal Reserve in an attempt to fight the hottest U.S. inflation in four decades can do further damage to corporate bottom lines and, in turn, share prices, according to HSBC.

On Tuesday, the bank joined other skeptics, including Goldman Sachs Group Inc. and Bank of America Corp., in revising its year-end target for the S&P 500 to 3,500 from 4,450 in 2022, which implies a drop of nearly 5 per cent from Monday’s close. It argues that a shift in the outlook for higher borrowing costs will weigh on valuations for U.S. equities.

Valuation risks for the benchmark index “will persist well into 2023, and most downside in the coming months will come from slowing profitability,” which threatens to push the S&P 500 as low as 3,200 in the fourth quarter, according to Max Kettner, HSBC’s chief multi-asset strategist. That puts the firm’s year-end target below the average of 4,346 in the last Bloomberg survey conducted in mid-September.

This view echoes what’s being said by Credit Suisse, Goldman Sachs and BofA, all of whom believe stocks aren’t fully reflecting the challenges facing the U.S. economy. On Monday, Credit Suisse strategists lowered their year-end goal for the S&P 500 by 10 per cent to 3,850, citing the prospect of weakening corporate earnings growth next year. Last month, Goldman slashed its 2022 target for the index to 3,600 from 4,300 on a higher-rate scenario. 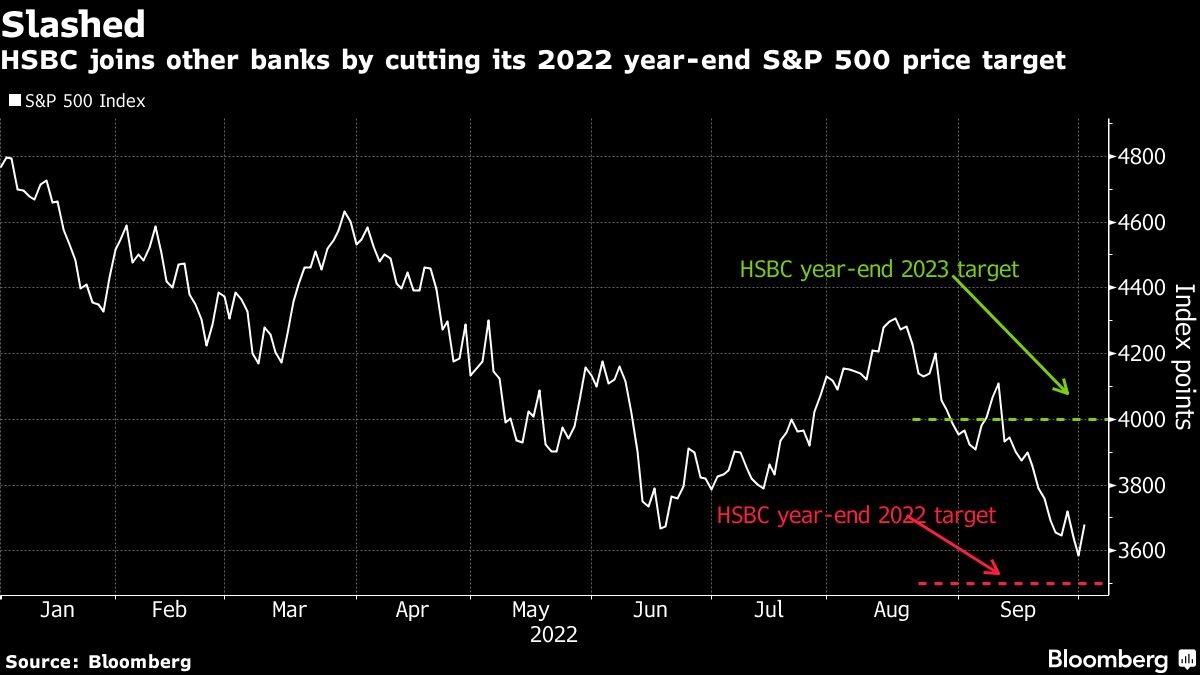 While the S&P 500 is on track for its best two-day surge since April 2020, even some of Wall Street’s most ardent bulls are turning to sour. JPMorgan Chase & Co.’s Marko Kolanovic, for instance, recently reversed the sanguine view he’s held throughout 2022, reiterating on Monday that hawkish central banks and the destruction of the Nord Stream pipelines will likely delay any recovery, putting the firm’s 2022 S&P 500 target of 4,800 at risk.

Despite this year’s selloff, Bank of America strategists led by Savita Subramanian said on Monday that there is “no full capitulation on Wall Street yet.” Last month, Subramanian reaffirmed the bank’s year-end target of 3,600.

Morgan Stanley’s Mike Wilson, one of Wall Street’s best known stock-market pessimists, has said U.S. equities are in the final stages of a bear market. He sees an eventual low for the S&P 500 coming later this year, or early next, at around 3,000 to 3,400.

HSBC anticipates that the lows in risk assets will appear at the start of 2023, with the chance of a U.S. recession growing. But the bank also believes stocks could rally back in the second half of next year.