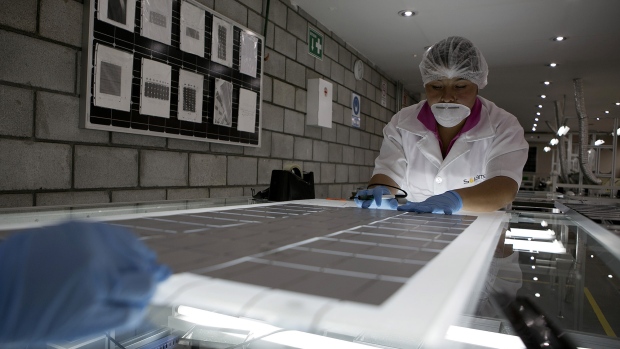 (Bloomberg) -- Analysts continued to warn about the damage imposing tariffs on Mexican goods may inflict on markets, as U.S. and Mexican negotiators were set to resume talks on Thursday. U.S. equities were mixed in early trading.

The Trump administration failing to reach a truce with Mexico on Wednesday adds to concern “the market’s pullback from the April highs isn’t finished,” Calvasina wrote in a note. RBC has been optimistic an all-out trade war with Mexico would be avoided, but “one of the most important things we’ve learned about covering the U.S. equity market during the Trump presidency is that it pays to be prepared for the worst, unthinkable outcomes,” she said.

Calvasina still views the second-quarter reporting season as a “pivotal test for stocks and an opportunity for markets to stabilize as 2019 earnings expectations are reset.’

Cowen’s base case remains that the tariffs go into effect, though the situation is “very fluid and entirely dependent on Trump’s mood on Sunday.”

Krueger sees negative read-through for China and other trade talks, as “who wants to sign deals (USMCA) only to be knee-capped weeks later with arbitrary tariff threats?” He added that “whether or not the tariffs go into place on Monday, we believe that real and lasting damage has been done to the broader Trump trade grand strategy.”

“Can Trump take yes for an answer?” Valliere asked in a note, adding that “even Trump’s hard-line trade hawk, Peter Navarro, said yesterday that the U.S. has obviously gotten Mexico’s attention, and that an agreement could be reached that avoids new tariffs.” That means “there’s room for Trump to spin Mexican concessions as a victory.”

At the same time, there’s “no clear end-game,” Valliere wrote. Trump “can’t possibly think that the flood of immigrants will be reduced to zero in one month, so what’s his objective? A sharp reduction? We’ll be glued to the Sunday talk shows, because the outcome won’t be clear until Monday — if then.”

Some Mexican positions, including asking the U.S. to stem a flow of guns across the border, pose “significant challenges to a deal,” Allen wrote in a note. “Efforts to impose restrictions and enforcement measures on gun sales in the U.S. are a non-starter for Trump’s base and probably unsupportable for the White House.”

Mexico’s rejecting U.S. demands that they house Central American asylum seekers also presents a challenge, and may “draw the ire of conservative groups who accuse Mexico of being a ‘free rider’ in the asylum debate,” he said. Conservative attention limits Trump and raises the risk he’ll be “backed into the same corner he was over government funding in late 2018, which resulted in a shutdown.”

To contact the editors responsible for this story: Catherine Larkin at clarkin4@bloomberg.net, Morwenna Coniam