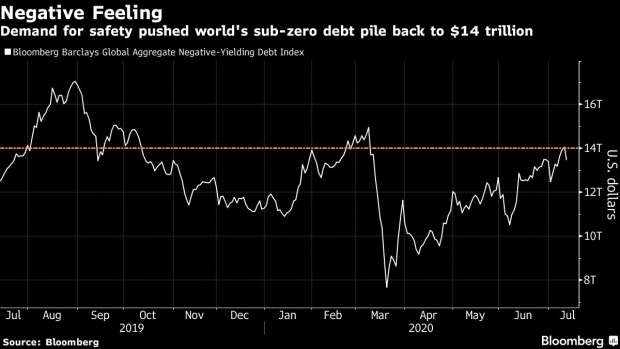 (Bloomberg) -- The constant refrain on Wall Street is that markets have broken from pandemic reality, yet the evidence keeps suggesting otherwise.

The S&P 500 staged a late-session reversal on Monday on fresh virus fears that underscore the jitters behind the global rebound in risk. The latter keeps taking place alongside a historic bid for safety and elevated equity volatility.

Those signals of investor fear are appearing in the highest quality bonds, where the more than $13 trillion pile of sub-zero yields has threatened to surpass the March peak. In the safest exchange-traded funds, which hold more gold than ever before. Under the equity surface, where valuations point not to exuberance but to continued defensiveness in favor of growth stocks.

As companies prepare to report how they fared at the pandemic peak, this bifurcated market is one way to make sense of risk appetite that seems to defy economic logic.

Read more: Behind the Relentless Stock Rally, Waves of Anxiety Are Building

“The V-shaped equity market is deceptive,” said Erik Knutzen, the chief investment officer of multi-asset strategies at Neuberger Berman. “Far from a vote of confidence, the rally has been led by a handful of defensive, U.S. large-cap growth stocks, and it has not been backed up by a similar rebound in more economically sensitive sectors and regions or in Treasury yields.”

Much has been made of the apparent disconnect between Main Street and Wall Street after stocks staged the fastest rally in history as the world’s largest economy sunk into recession. With the economic fallout of the coronavirus still unfolding, the fact that global equities trade at about 20 times their forward earnings is often a cause for worry.

Not so fast, say Morgan Stanley strategists. They argue that by looking at equity prices through cyclical ups and downs, and on a current price relative to the last 10 years of real earnings, valuations right now are pretty much average. That would suggest they’re no threat to gains over the next year.

“Valuations are still a long way from implying a normal recovery, and instead reflect a market that remains concerned about long-term growth,” Morgan Stanley cross-asset strategists led by Andrew Sheets wrote in a report last week.

Even before the pandemic struck, the market has looked famously lopsided, with gains driven by tech darlings including Alphabet Inc., Amazon.com Inc., Apple Inc., Facebook Inc. and Microsoft Corp.

Whereas the S&P 500 now trades at 22 times historic earnings per share, the benchmark’s equal-weight counterpart trades at just 18 times. The premium for the market-cap weighted index remains not far from the widest since 2008 -- showing just how sacred megacap firms have become.

The partial reopening of economies has only deepened investors’ faith in the privileged few rather than tempt them to make risk-on bets on smaller, cyclical and lower-quality companies. Value stocks won’t stop trading at a historically large discount to larger peers.

Even investors fretting over the rally in junk debt can take solace, according to Morgan Stanley. The likelihood of defaults is already built into the debt prices of the most at-risk companies trading at half their face value, it said.

Meanwhile, caution abounds in the ETF market. Gold’s grind to the highest in nine years has been driven by an almost relentless flow of cash into bullion funds. ETFs have increased their holdings of the metal every month in 2020, and have already added more than in any prior year.

Almost as relentless is the drive for the safest bonds. Months after the worst of the equity selloff abated, the world’s pile of debt with negative yields has been slowly growing as investors divert cash into havens. It topped $14 trillion on Friday, threatening to surpass the level reached in March.

It all points to a market that’s paying close attention to the world around it, reaching for companies that can survive another downturn while the rate of global Covid-19 infections stays elevated. Social distancing and fears over their health are keeping consumers at home, even in economies that have reopened.

“All those represent wagers against a strong recovery, and instead on a world where growth remains weak and uncertainty remains high,” the Morgan Stanley strategists wrote.