We are leaning into cyclical and value sectors: JPMorgan's Meera Pandit

A day after celebrating the Federal Reserve’s signal that it wouldn’t be making any jumbo-sized moves, traders woke up on Thursday deciding that the central bank will struggle to fight high inflation amid the lingering threat of a recession.

In a sharp about-face, investors sold stocks, bonds and cryptocurrencies on Thursday. The S&P 500 Index lost 3.6 per cent, erasing about US$1.3 trillion of market value, and the tech-heavy Nasdaq 100 dropped 5.1 per cent, the most since September 2020.

“The great puking that’s happening? I didn’t expect that,” Kim Forrest, founder and chief investment officer at Bokeh Capital Partners said by phone. “We live for the days where we’ve made people money -- that’s our job -- and it’s cold comfort that I’m losing people less money.” 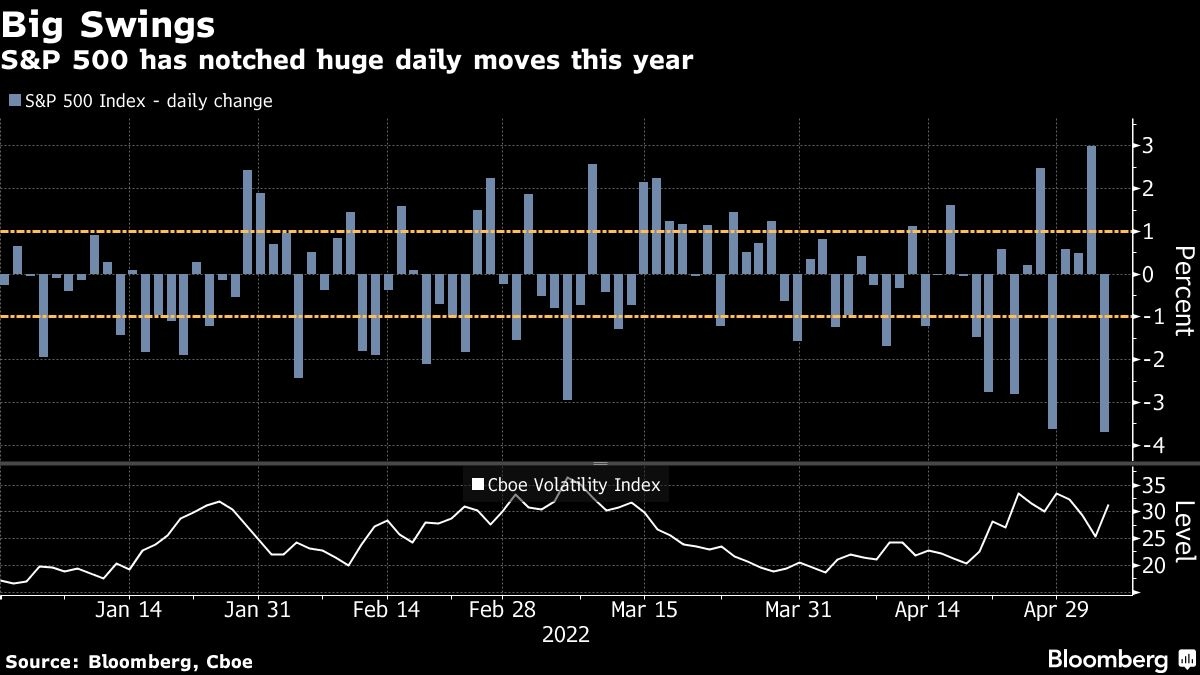 Speculative corners of the market were among the hardest hit, with an index of expensive software stocks sliding more than 10 per cent, the most since mid-March 2020. An ETF tracking newly public companies lost 7.6 per cent, while non-profitable tech firms lost roughly 11 per cent, as Bitcoin -- the largest cryptocurrency -- dropped by the same amount to just above US$36,000.

“There’s still a lot of fear out there,” said Dennis Dick, head of markets structure and a proprietary trader at Bright Trading. “People thought yesterday was the green light, but now they’re getting caught again. Retail traders keep coming in and getting chopped up. The contrarians have been winning 2022.”

“The only thing that will lead to a sustained turnaround is if we see inflation start to not look so hot,” he added. “Any rally that isn’t on improving inflation is a sucker’s rally.”

Here’s what other market-watchers had to say:

“It looks like some people might have viewed yesterday’s rally as a good exit, and then it just started feeding on itself this morning. The market did need to pull back and re-calibrate for value, but the viciousness of the move is really the story of the day.”

“The S&P 500 seeing its strongest gains since 2020 on the day the Fed decides to hike interest rates is kind of extraordinary, so we are seeing a reprice today, which is expected. But at the end of the day, the risks remain. Inflation remains high. The Fed is keen to act.”

“When Powell said he wasn’t going to tighten 75, that’s what led to that relief rally. But they’re still tightening, and they’re still tightening at a more aggressive pace than most would have imagined just a short while ago. So it is difficult to buy into the rallies,” he said. “Overall financial conditions are going to be tighter moving forward and certainly the risk of a recession, the risk of tighter financial conditions leading to a recession is still there. So it’s very difficult to jump on any sort of rally under these conditions.”

“The scale of today’s move is a little surprising. We had been viewing 4,200 as a support for the S&P 500, and we’re below that now. Really, this seems like a knee-jerk reaction from yesterday, with some profit-taking. There could also be some portfolio managers out there recommending the buying of bonds and selling stocks, which could be contributing to the overall weakness.”

“People have been looking for a capitulation, where everyone just throws in the down. Perhaps today is that day. This is the first day that I would describe as a capitulatory day,” he said. “Even though some of these high-valuation, low-profitability names are down 60-70 per cent, it doesn’t seem like there is any appetite to buy the dip.”

“We all knew something like this was going to happen eventually,” he added. “We’ve seen it before. We tried to warn the young traders, but they didn’t want to hear it. But I think this will result in a better market, because you actually have to look for quality.

“Investors are getting spooked by the combination of soaring unit labor costs and a significant drop in productivity. Those are some stagflationary-like readings. The reports this morning are all from 1Q. They haven’t told us anything new, but investors are clearly extremely focused on inflation.”

“Usually you end up having a reversal move to digest whatever occurred the day before,” he said of stock moves around Fed days. “There’s a pop after a drop, and, in this case, there’s usually a drop after a pop. On the one hand, it’s because traders are looking to take profits because they questioned the sustainability of this advance.”

“Chairman Powell was clear-ish -- I say clear-ish because he said soft-ish landing. But when he took the 75 basis points off the table, inherent in that was a suggestion that perhaps they wouldn’t need it,” she said. “Why would you say that if you thought, for example, inflationary pressures were going to climb even higher?”

“Day after day, the direction seems to change. This opens up good opportunism for companies which have fundamentals, strong earnings, strong outlook for the next three-to-five years. What is really interesting about these markets is that there are these every-other-day changes in either direction where investors are outrageously bullish or outrageously bearish the next day.”