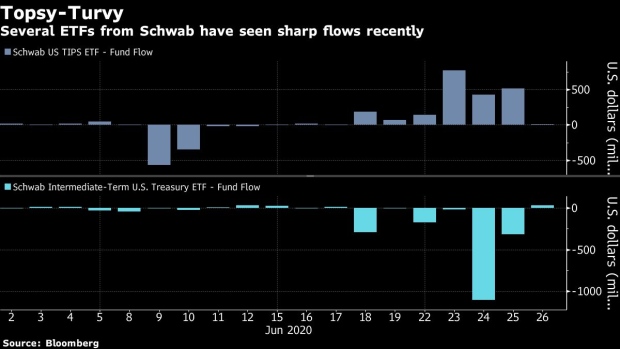 (Bloomberg) -- More than $8 billion is on the move in Charles Schwab Corp.’s exchange-traded funds, stirring speculation the firm could be adjusting the packaged strategies it offers clients as markets gyrate amid the pandemic.

Over the past seven trading days, $4.6 billion has exited from a group of four ETFs including Schwab’s fundamental equity and intermediate-maturity Treasury funds. The firm’s emerging-market equity and inflation-focused bond offerings were among four products to rake in $3.9 billion at the same time.

Schwab is the biggest holder of all of the funds, according to the latest available filings.

The size of the flows -- more than half of the funds posted at least one record daily flow in the period -- and the broad range of ETFs involved is stirring speculation that Schwab is shifting exposure in its model portfolios.

Such prefabricated packages of ETFs offer a one-stop solution to a client’s investment needs. Instead of spending time selecting individual funds, investors can pick a portfolio aligned with their goals and risk tolerance.

It’s unclear how much cash follows such models, but it’s thought that when one makes a strategic shift, billions of dollars can move between ETFs.

A Schwab spokeswoman declined to comment on whether the flows were a result of model portfolio reallocations, but acknowledged that the firm’s ETFs are used by a variety of such investments throughout the industry. Schwab’s own models run the spectrum from conservative income all the way to aggressive growth, according to its website.

It’s not the only theory, however. Some strategists observe that pension fund withdrawals, a brightening outlook for emerging-market assets, or the lurking risk of an inflation uptick could be driving money in and out of the ETFs.

Here are five views on what’s behind the Schwab flows:

With Schwab the largest holder in most of those funds, it probably is them. It makes sense. They were material contributors to equity exposure back in March. Those positions have had significant runs since then, so this looks like some well-earned profit taking. It is likely that pension funds holding these positions are adding to the withdrawals, as many are forced to reallocate some of the recent equity gains. Moving that liquidity to fixed income will keep them within their respective strategic asset allocation.

These certainly look like model portfolio shifts. The one note I’ll add is I think the interest in SCHP may be a bit broader. Given unprecedented government stimulus and Federal Reserve programs, I think some investors are seriously considering inflation for the first time in years. TIPS can serve as an excellent hedge and SCHP is meaningfully less expensive than its nearest competitor TIP.

It seems like a model portfolio. It could be a move because of the dollar. There’s growing concern the lower dollar is going to raise commodity prices, and the lower dollar obviously is very positive for emerging markets. I wonder if some of this is because some of these individual traders who have become so active are starting to move toward individual stocks. Instead of just buying ETFs, they are saying “I could get a bigger move out of an individual stock.”

Given Charles Schwab is itself the largest holder of each of these products, it is likely the flows are driven by an internal model allocation change.

This seems like a change in the asset allocation of some possibly in-house models and preferred usage of Schwab’s traditional beta-based ETFs and fundamental-based ETFs. The shift has been away from developed international equities with FNDF and small cap FNDA to emerging markets FNDE. But in addition, large cap SCHX has seen inflows while fundamental FNDX has outflows. FNDX has a value tilt and more exposure to financials and less exposure to information technology stocks than the more core focused SCHX.