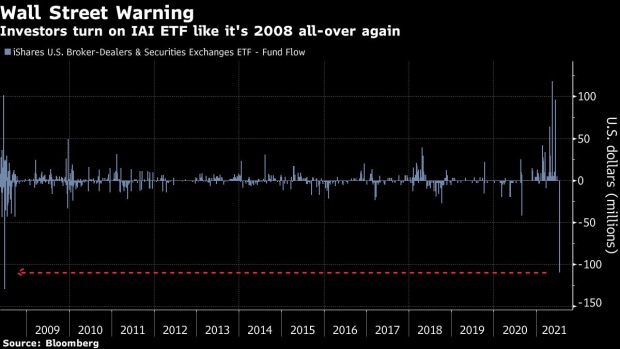 (Bloomberg) -- An exchange-traded fund tracking the fortunes of Wall Street has just posted its worst day for flows since the 2008 financial crisis.

Investors withdrew $110 million from the iShares U.S. Broker-Dealers & Securities Exchanges ETF (ticker IAI) on Tuesday, according to data compiled by Bloomberg. That cut assets in the product by 12% to $805 million.

It’s a notable reversal for the fund, which had lured almost $700 million in the year through Friday after a decade in the doldrums.

The exits came on a day when the ETF rebounded 2.5% following the Monday rout -- suggesting some investors are betting post-pandemic gains for big banks are largely priced in.

IAI follows an index of investment service providers, securities and commodities exchanges, with particular focus on broker dealers. Its biggest holdings are Morgan Stanley, which last week reported its second-most profitable quarter on record, and Goldman Sachs Group Inc., whose earnings showed a boom in deal-making.

Those big bank results also revealed a big slowdown in trading activity following a pandemic-fueled boom. That’s a bad sign for IAI, which is also invested in the likes of Intercontinental Exchange Inc. and Nasdaq Inc. as well as Charles Schwab Corp. and Interactive Brokers Group Inc.

IAI has fallen for nine of the past 12 days. After the Tuesday bounce, it was up about 26% this year compared with about 15% for the S&P 500 Index.