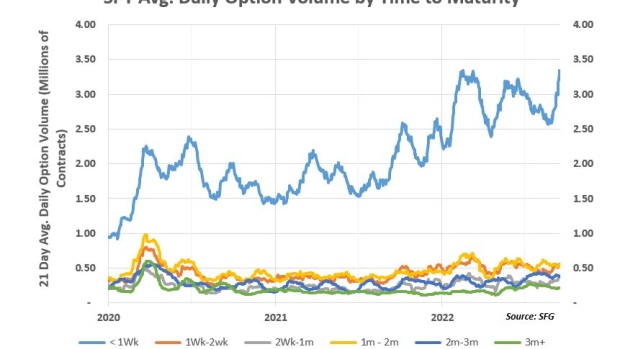 (Bloomberg) -- Betting on Federal Reserve-spurred market fireworks, but lack conviction on where stocks are headed in the months ahead as news bombs hit the tape? You’re far from alone.

Stocks retreated Tuesday, with the S&P 500 sinking more than 1% on the eve of the Federal Open Market Committee decision. Wild daily market moves have been so common of late that options traders are loading up on short-term bets at a pace unseen in the post-lockdown era.

Over the past month, the average daily volume in derivatives contracts linked to the biggest ETF tracking the S&P 500 (ticker SPY) with a maturity within one week spiked to the highest level since at least the start of 2020, data complied by Susquehanna International Group. By contrast, trading in long-dated contracts mostly slowed or stagnated.

Whether they’re directional wagers or intended as a hedge, it’s hard to tell. But the intense focus on the here and now may reflect a lack of conviction to trade options with longer maturities at a time when the market is stuck in a range. Add on top all the market-moving developments such as last week’s shocking inflation data, and it’s a recipe for traders to shorten their time horizon.

“There is clearly an enhanced focus on macro events like CPI and the FOMC,” said Chris Murphy, co-head of derivatives strategy at Susquehanna. “Macro events are driving markets and narratives appear to be turning on a dime. In this kind of an environment, it might make sense to use near-term options to express opinions.”

To stock investors, the cluster of near-dated options means the cash market is more likely held hostage to the derivatives market. While a controversial narrative, Friday’s $3.2 trillion options expiration, for instance, was viewed in some circles as one catalyst worsening the equity selloff that’s sparked by the hotter-than-expected reading on the consumer price index.

This year has been a dangerous one for bulls and even bears with all the twists and turns. While the Fed is expected to raise interest rates by another 75 basis points Wednesday, any damage from monetary tightening has yet to show up in broad corporate earnings. Buffeted by conflicting narratives, stock moves have made market timing all but impossible.

One standout constant, however, is the market’s propensity to swing wildly around key economic data or policy events. Take Fed day, for instance. The S&P 500 has moved an average 1.9% this year on the day when the central bank announced its policy decision. That’s about double an average for all Fed days in the previous three years.

Right now, the benchmark index was implied to move about 2% Wednesday, based on an at-the-money straddle strategy that buys an equal number of calls and puts with the same strike price and expiration date.

Forecasting 2022’s market has been a futile exercise for even professional prognosticators. While many strategists were forced to cut their year-end targets during the S&P 500’s worst first half in five decades, the index has since largely been trapped in a range between 3,600 and 4,300.

With uncertainty lingering over the Fed’s monetary policy and its impact on the economy, strategists tracked by Bloomberg have shown divergent views on the stock market on a scale rarely seen in history.

While the long-term outlook remains murky, equities have become a one big trade where the obsession with economic data or Fed speech overwhelms company fundamentals. That backdrop, along with relatively inexpensive options, has contributed to the frenzy of bets on what’s coming in the days ahead, according to Brian Donlin, an equity derivatives strategist at Stifel Nicolaus & Co.

“Option premiums are cheap relative to the moves we are seeing,” he said. “And we have clear consistent macro data points as catalysts more than ever.”