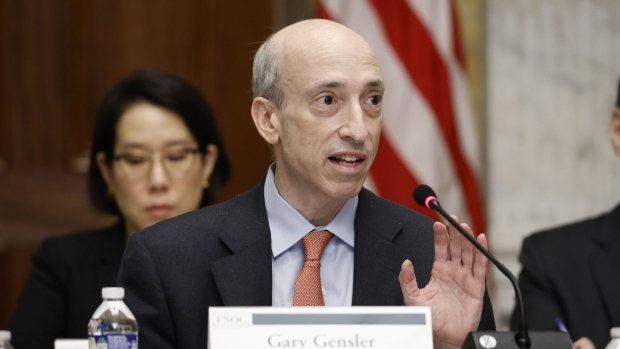 (Bloomberg) -- Wall Street firms that help issue asset-backed securities wouldn’t be able to bet against those products under a plan from the US Securities and Exchange Commission.

The SEC’s five commissioners on Wednesday voted unanimously to propose new conflicts-of-interest regulations for investment banks and others involved in securitizations. The new restrictions wouldn’t cover market making or trades to hedge against risk, according to the commission.

SEC Chair Gary Gensler called the measure an “unfinished step in Congress’s vision for financial reform” following the 2008 financial crisis. “It fulfills Congress’s mandate to address conflicts of interests in the securitization market,” he added.

The proposal would mostly prohibit firms involved in selling ABS from shorting that security, purchasing related credit default swaps, as well as other types of bets that could run counter to the interests of investors who bought the products.

The SEC first proposed a version of the rule in 2011, and more than a decade later it remains one of the few requirements under the Dodd-Frank Act that the agency hasn’t completed.

The most public example of the issues that the SEC plan seeks to address involved a transaction that Goldman Sachs Group Inc. put together in 2007, known as Abacus 2007-AC1. It was essentially a giant bet on a portfolio of subprime mortgage bonds. The deal was created at the request of hedge fund Paulson & Co., which wanted to wager that many of the bonds backing the transaction would sour.

Goldman Sachs found investors to essentially take the other side of that wager, without telling them that the securities had been selected by a hedge fund betting the bonds would fail. When details of the transactions went public, there was an immediate outcry.

The bank agreed to a $550 million settlement with the SEC over the case. Goldman didn’t admit or deny the allegations, but said at the time that it had made a mistake by not including more disclosure. In the aftermath, it set up a business standards committee and took steps to more clearly separate its customer brokerage business from its own trading.

The SEC will now take comments from industry and the public for at least 30 days and will need to vote again to finalize the rule after taking into account that feedback for it to go into effect.

(Updates with vote in second paragraph, background in sixth.)