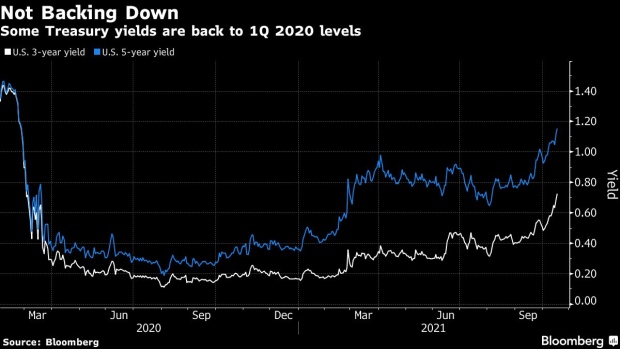 (Bloomberg) -- Wall Street strategists who thought the coast was clear for bets on lower Treasury yields are abandoning ship after the market moved against them in a global bond selloff.

Those at Toronto-Dominion Bank and Barclays Plc reversed course on recommendations to buy five- and three-year notes, respectively, as Treasury yields extended their recent climb. Yields on the securities rose nearly seven basis points Monday to the highest levels since at least March 2020.

Rising yields since the Federal Reserve’s September meeting reflect mounting expectations for an interest-rate hike as soon as next year in response to accelerating inflation. Traders of U.S. interest-rate futures now assign 50-50 odds to a 25-basis-point increase in June.

Not everyone is convinced, though. BlackRock Inc.’s Scott Thiel said markets have gone overboard. He expects the Fed to hold rates steady until 2023.

The timing of rate increases has implications for longer-dated Treasuries, where yields have risen less aggressively. The 10-year note’s yield, for example, remains about 20 basis points below its March 2021 high.

Strategists at JPMorgan Chase & Co. favor bearish bets on 10-year Treasuries, on the view that market-implied expectations for the Fed are too low relative to inflation expectations, which are likely to rise.

Positioning will probably support cheapening in the 10-year sector via futures, Morgan Stanley says. Gains for that part of the market during the second half of last week were accompanied by declines in open interest, suggesting that short-covering was an important driver. It may amount to renewed appetite to set new shorts, the bank says.