Dip buyers wagering that the era of central-bank hawkishness has peaked got a reminder Wednesday that they are playing a dangerous game.

The S&P 500 sank as much as 1.8 per cent after the biggest two-day surge since April 2020 drew in traders tanked up on newly dovish monetary bets. While the index clawed back most of the losses to close 0.2 per cent lower, would-be bulls were put on notice as Federal Reserve Bank of San Francisco President Mary Daly disabused notions that a policy pivot is in the offing.

Yes, recent events in the U.K. and Australia suggest monetary officials will have to weigh their hawkish impulses against risks to economic and financial stability. Yet with nothing short of policy credibility at stake given price pressures remain at decade highs, the Fed looks all set to press on with its most aggressive tightening campaign in recent memory.

“We’ve been struggling with this idea that markets are pricing a fast pivot from the Fed next year,” said Christian Mueller-Glissmann, head of asset allocation research at Goldman Sachs Group Inc, who correctly warned that real yields would turn positive this year -- bringing with them bear markets. “We see the Fed continue to hike into next year so it might be too early to expect long-dated real yields to peak on sustained basis.” 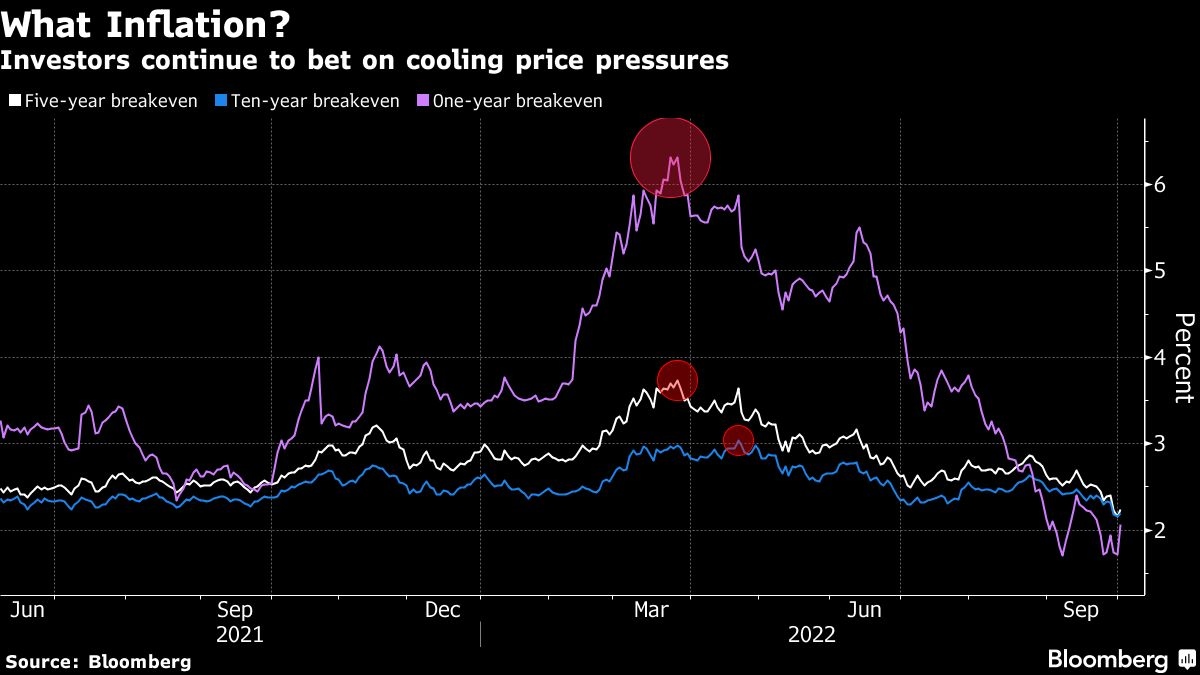 Hopes that central banks are ready to back down from aggressive tightening campaigns intensified after a dovish surprise from Australia’s central bank and bond-buying plans by the Bank of England. This took the S&P 500 and the tech-heavy Nasdaq 100 higher by more than 3 per cent on Tuesday as traders pricing in rate cuts in 2023 fueled a giddy rebound in key indexes at the start of the fourth quarter following the longest string of losses since 2009.

A Goldman Sachs Group Inc. basket of non-profitable tech firms rallied as much as 8 per cent on Tuesday after shaving more than half its value in the first nine months of this year amid a massive rate-induced valuation correction.

The recent risk appetite runs counter to the hawkish missives lobbed by Fed officials on a seemingly daily basis, talking up their steely resolve to crush elevated price pressures. The central bank’s own dot plot forecast suggests the hiking cycle will see rates moving to 4.6 per cent in 2023, compared with the current benchmark rate at around 3.25 per cent.

Fed Chair Jerome “Powell has been clear that the Fed does not intend to pivot until the path to lower inflation in clear,” said Ed Clissold, the chief U.S. strategist at Ned Davis, who is neutral on U.S. shares, favoring small-cap companies over large. “The market should remain volatile in reaction to economic data points and Fed Speak.”

Meanwhile market-implied inflation expectations over the next two years have tumbled from as high as 4.9 per cent in March to around 2.3 per cent, implying traders reckon price pressures will fall closer to the Fed’s target -- clearing the path for a dovish policy pivot, in theory.

Yet those expectations are too benign, says Goldman’s Mueller-Glissmann. And it wouldn’t be the first time hopes for peak inflation have been disappointed. The U.S. consumer price index climbed by a more than forecast 8.3 per cent in August from a year earlier, wrong-footing many in the market. The Fed’s preferred inflation metric, core PCE data, also exceeded predictions last week.

Friday’s jobs data and the latest consumer price report due next week will give fresh clues on how much room the Fed has to tighten the monetary screw without materially damaging the U.S. business cycle.

Risk bulls may have seized on a seemingly newfound acknowledgment from U.S. monetary officials that the global economic landscape is darkening and that the Fed is attuned to the negative spillovers. Yet any resulting damage to the U.S. economy would be the proximate cause for a tentative shift in its rate-hiking campaign -- a scenario that some market watchers say is bad for all types of investors.

“Things need to get worse before they get better or before we see a Fed pivot,” said Christopher Harvey, head of equity strategy at Wells Fargo.