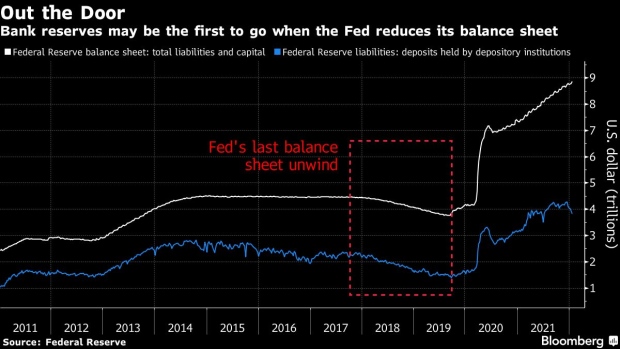 (Bloomberg) -- Wall Street analysts have been busy war-gaming just how quickly the Federal Reserve might start shrinking its balance sheet. Now attention is also turning to exactly which parts of the financial system it could suck the most liquidity from as it reverses its pandemic-era stimulus.

That matters because it could determine how disruptive the so-called quantitative tightening process is to financial markets as well as how long it might go on for. If and when the Fed starts to shrink its balance sheet -- whether by simply not replacing maturing securities  or outright asset sales -- there will be an increase in the amount of Treasuries in search of a home. Most of these are likely to be hoovered up by banks or money-market funds, which in turn will need to reduce the amount of cash they have parked in different ways at the Fed in order to purchase them.

If it’s mainly the banks, that could result in a significant drawdown in the amount of reserves that lenders hold with the U.S. monetary authority. Conversely, if it’s money funds, then there will likely be a drop in how much is squirreled away with the Fed’s overnight repurchase agreement facility. Of course, it will likely be a combination of the two, but whether one or the other takes the brunt will be important and is currently being debated by analysts.

It’s also a question that Fed officials, who are meeting this week to decide on their next moves, may struggle to answer, as it depends on how various market players react to the central bank’s policy steps.

A big shift in bank reserves is potentially the more problematic outcome and could curtail how long QT lasts -- and how small the Fed balance sheet ultimately gets. If the biggest impact is on the banks, then there is a risk of repeating some of the reserve issues that took place in late 2019 following the last round of quantitative tightening, according to Priya Misra, global head of rates strategy at TD Securities in New York.

Back then, a drop in reserves below the system’s comfortable level helped fuel a disruptive spike in rates on repurchase agreements, a keystone of short-term funding markets. The Federal Reserve has since then implemented additional tools to help reduce potential problems in this area, but a decline in reserves could nevertheless create risks and forestall how much the central bank chooses to shrink its balance sheet.

If bank deposits decline faster than expected, there could also be a mismatch in lenders’ securities portfolios, which might spark more widespread de-risking and result in institutions selling securities at a time when the Fed is also stepping away from the markets.

A reduction in the balance of the so-called RRP, which currently stands near $1.6 trillion, would likely be more benign, and the unwinding process could continue for a while, according to Misra.

Just where the liquidity drains from then is a key question, and one on which interest-rate strategists are divided: