In the fall of 2019, Walmart Inc. started testing a service to deliver groceries right into fridges while customers were out.

Then the pandemic kept Americans at home, making Walmart’s InHome business largely unnecessary. But it’s not dead. With online grocery booming during COVID-19 and vaccinations rising, the world’s largest retailer is expanding the service. It still faces a hurdle, though: Do Americans trust Walmart traipsing through their kitchens?

After debuting in Pittsburgh, Kansas City and Vero Beach, Florida, Walmart recently brought InHome to its home turf of Northwest Arkansas, expanded in Southeast Florida and in July will add Atlanta. A successful rollout could help solidify it as the biggest player in the US$1.8 trillion U.S. grocery market, a position under attack from the likes of Aldi and Amazon. Grocers gained millions of online customers last year, and now the challenge is keeping them. While Walmart’s low prices usually give it an edge, convenience and speed are crucial on the web.

“Grocery delivery was niche, and now it’s very mainstream,” said Whitney Pegden, a Walmart vice president and the general manager for InHome. “Now we have a large group of consumers used to it, and they’re starting to return to normal life and running into the issue of having to be home during deliveries. So the timing is really ripe for our service.”

While Americans are venturing out more as vaccinations increase, there’s still a big question of whether they want someone nosing through their refrigerator. To put customers at ease, Walmart uses its own long-tenured employees, who meet customers (and sometimes their pets) before the first order and get trained on things like how to neatly stock a fridge. Delivery staff wear masks, gloves, booties and body cams, which live stream and record the delivery, and they enter homes (or garages) with one-time access to smart locks. Pets must be kept out of the way, although Walmart is testing letting them roam free in one market. The service costs US$19.95 a month with a 30-day free trial. 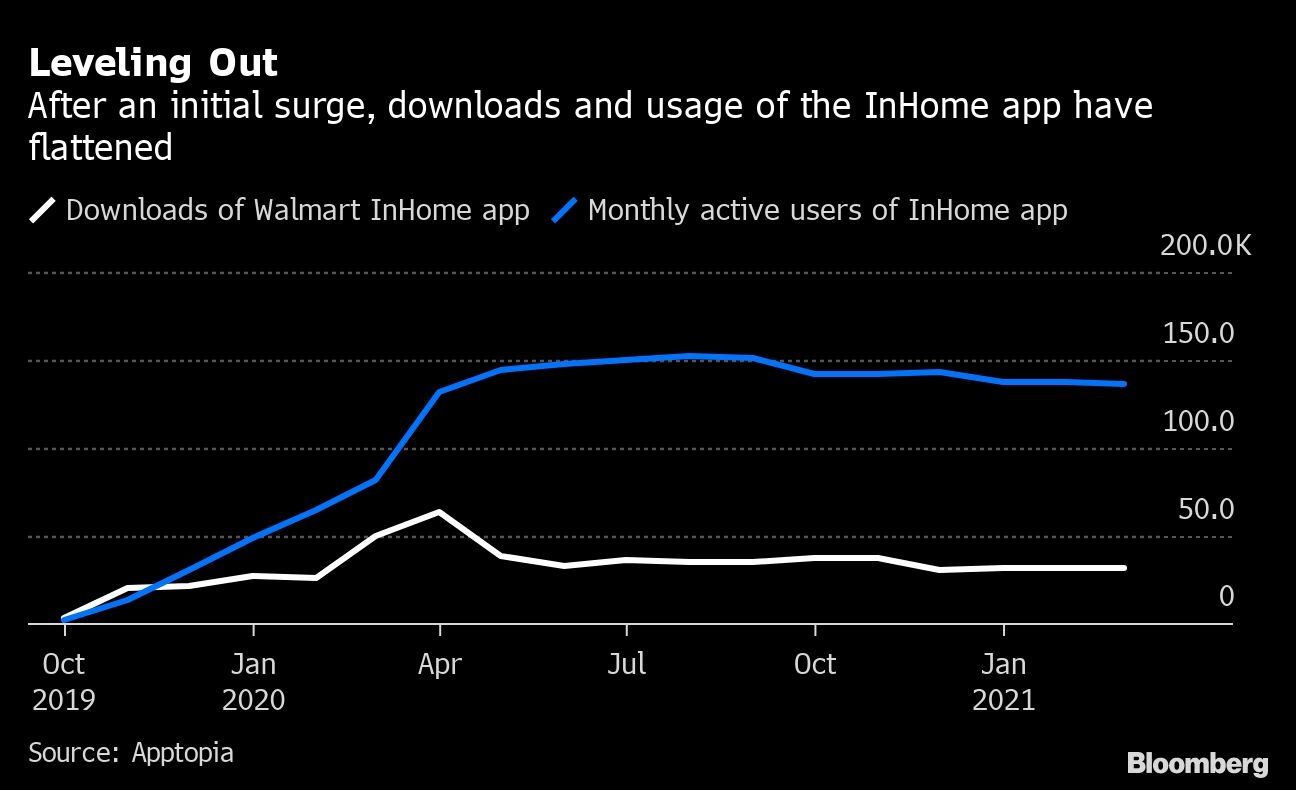 Some customers enjoy the convenience. Mumbi Mundia-Howe, a mother of five living in the Pittsburgh suburbs, likes that she gets the same delivery staff on each order. One unexpected benefit: The US$20 fee is less than she tipped her regular grocery delivery people each month. “Having someone pick my groceries, deliver and put them away is a lifesaver,” she says.

But there are snags. For starters, Walmart recommends that for in-home deliveries users install a smart lock or bolt from Level Home Inc., a Bay Area startup that it has a stake in. Mundia-Howe has another brand of smart lock, and she says Walmart’s insistence on one product—which it offers with free installation for US$49, well below its normal price—is the “main negative” about the service. (Walmart says if an existing smart lock uses a keypad, it need not be replaced.) There’s also competition: Amazon this week expanded its service that delivers groceries into garages to more than 5,000 cities and towns.

The big drawback for others, though, is the intrusiveness. Pegden cites internal surveys that show users gain a comfort level with the service after just one delivery, but she declined to share data on membership or sales. A survey from market researcher CivicScience found that nine out of 10 people weren’t likely to try the service. Consumer psychologist Peter Noel Murray says that’s because safety and security are “paramount” for post-pandemic shoppers.

Walmart’s InHome is a “great idea on paper, but consumers don’t want to do anything that makes their life more uncertain and brings more anxiety,” he says.

Pegden disagrees. When the pandemic hit, “I was definitely a little worried that our service might not be well matched to the world we were living in,” she says. “In the end, that’s not really how it played out.”

Still, Walmart paused in-home deliveries during the early days of lockdowns, delivering to doorsteps instead. That might explain why data tracker Apptopia found that downloads and usage of the InHome app have plateaued in recent months. Pegden disputes that, saying the service is adding more customers every week.

To sweeten the offer, Pegden says InHome members will also gain perks like fuel discounts that are part of Walmart+—the retailer’s fledgling US$98-a-year subscription that offers grocery delivery, albeit only your front door. What they still can’t get, though, is alcohol right to their wine fridge due to regulations requiring customers to be present.

Trust, apparently, only goes so far.