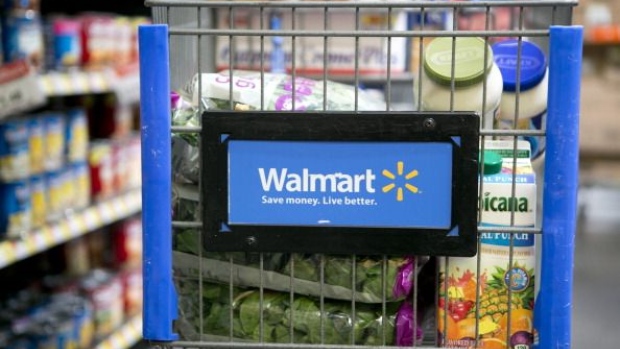 Walmart Inc. has taken on 25,000 new employees and given offers to thousands more in the first week of a hiring push, as the biggest private employer in the U.S. scrambles to keep its shelves stocked and checkouts staffed during the coronavirus pandemic.

The retailer has compressed a hiring process that can often take two weeks into as little as three hours by eliminating formal interviews and written job offers, giving store managers authority to make verbal offers right away, according to Dan Bartlett, executive vice president of corporate affairs. The applicants include high school and college students along with those let go from jobs at restaurants and hotels.

Walmart last week pledged to hire 150,000 hourly workers, increasing its U.S. work force by 10 per cent, amid a rapid economic shift due to the coronavirus pandemic. While service industries are laying off huge numbers of workers in response to plummeting demand, retailers like Walmart and Amazon.com Inc. are adding staff to keep up with a burst in traffic.

“We’re seeing a surge in applications,” Bartlett said in an interview. “The stores are able to engage directly at the ground level,” bypassing regional hiring managers to speed the process.

That expedited process worked for Jabren Thompson, a 16-year-old in Boise, Idaho, who got a job unloading trucks for US$11 an hour. Thompson, who previously was digging trenches and feeding livestock on a farm for US$10 an hour, said he felt “very welcomed” by his new co-workers.

Not all Walmart employees are rolling out the welcome mat for Thompson and his fellow greenhorns. Stacy Rowback, an associate at the Walmart in Gloversville, New York, and a member of United for Respect, a labor-advocacy group that has targeted Walmart and Amazon, said the new hires are there “to do our jobs for us.” Instead of hiring more workers, Walmart should give more hours to its part-time associates, she said.

Bartlett said that’s happening, however, and the retailer is giving priority to existing employees to add hours before new hires come on board.

Employees have aired other grievances on online message boards, particularly concerning safety measures to prevent the spread of the coronavirus in crowded stores. Some grocers, like Kroger Co., have installed plexiglass partitions at checkout counters, while most have put measures in place to maintain social distancing among shoppers.

“It’s time to limit the stores to 10 customers at a time,” one commenter said on a Reddit group frequented by Walmart workers, adding that without the measure, “Walmart is a cesspool for coronavirus.”

Earlier this week, the retailer said it’s installing plexiglass sneeze guards at its pharmacy lanes and plans to do the same for regular cash registers over the next two to three weeks. It will also put decals on the floor in checkout lanes to indicate the right distance shoppers should keep from each other. Workers are also using a new spraying tool to more rapidly sanitize shopping carts.

Thompson, the new hire in Idaho, said he was satisfied with the safety measures that Walmart has taken. The high school junior, whose school is closed due to the coronavirus, said he “wouldn’t mind” getting hired into a permanent role one day. Walmart has said many of the temporary roles will convert to permanent ones over time.

Bartlett said Walmart is making faster decisions about operations in addition to an expedited hiring process. The company has seen its supply chain “rebalance a bit” as it copes with the surge of demand for food, toilet paper and other everyday essentials.