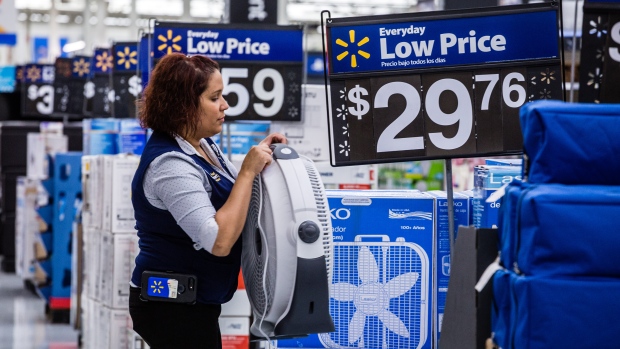 An employee arranges a fan on display for sale at a Walmart Inc. store in Secaucus, New Jersey, U.S., on Wednesday, May 16, 2018. , Timothy Fadek/Bloomberg

Walmart Inc. (WMT.N) overcame a spate of nasty spring weather to deliver a solid first-quarter performance in the U.S., erasing the sting of a lackluster holiday period.

Comparable sales at U.S. Walmart stores grew 2.1 per cent in the three months ended April 30, the company said Thursday, just shy of analysts’ estimates. Customer visits rose 0.8 per cent, the slowest growth in more than a year, as bad weather kept people from visiting the stores. But shoppers did spend more on each trip and the retail giant said business has picked up in recent weeks.

The shares rose 1 per cent in premarket trading.

“We never do like to blame the weather, but in this case it was unseasonably cool and wet,” Chief Financial Officer Brett Biggs said in an interview. “That impacts some of the seasonal categories. What you see when you have prolonged wet weather is that people consolidate their trips. Since the weather moderated, the categories that were challenging have come back as we expect.”

Poor weather is just the latest challenge facing Chief Executive Officer Doug McMillon, who’s overhauling the retailer abroad as it battles against Amazon.com Inc. Walmart generates most of its profits and sales in the U.S., though, and its heavy spending to lower prices and expand its online business has raised concerns among some investors recently. Through Wednesday’s close, the shares had fallen 13 per cent this year, after two straight years of increases.

Walmart’s adjusted earnings amounted to US$1.14 a share in the fiscal first quarter. That beat analysts’ average projection of US$1.12. Online revenue in the U.S. rose 33 per cent, better than the holiday quarter’s subpar performance but below the 40 per cent pace the company had forecast for the full year.

The company’s recent moves include combining its British chain Asda with J Sainsbury Plc, uniting the U.K.’s second and third-biggest supermarket chains in a transaction worth about US$10 billion. Less than two weeks later it inked its biggest-ever deal to gain a majority stake in India’s Flipkart Group, striking a blow against Amazon, which has spent billions to gain customers in the world’s second most-populous nation.

The Flipkart deal should help position Walmart in a fast-growing market, but for now it risks crimping earnings that are already under pressure from rising food and transportation costs in the U.S. Gas prices are also on the rise, which could prompt Walmart’s lower-income shoppers to spend less on each trip or even come into the stores less often.