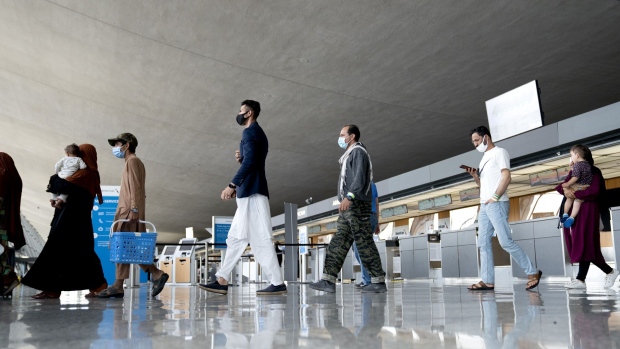 (Bloomberg) -- Companies including Walmart Inc., Instacart Inc., Starbucks Corp., Microsoft Corp. and Facebook Inc. will back a relief effort for Afghan refugees in the U.S. to be led by the families of former Presidents Bill Clinton, George W. Bush and Barack Obama, organizers said.

The new consortium is intended to serve as a central point of contact in the massive public and private effort to support about 60,000 Afghans expected to arrive in the U.S. within the next several months, Welcome.US co-chairs Cecilia Munoz and John Bridgeland said on Tuesday on a conference call with reporters.

The group will coordinate efforts between state, local, and federal officials, companies, nonprofit organizations and the nine national agencies contracted by the government to oversee refugee resettlement. It will also provide emergency grants to nonprofits and start an ad campaign to encourage all Americans to join the bipartisan effort.

“Helping our Afghan allies build new lives is not a Republican issue or a Democratic issue -- it’s just common sense,” said Maryland Governor Larry Hogan, a Republican who is working with the group. “Alongside so many partners who are equally dedicated to this effort, we are directing all available resources to help because it’s the right thing for all of us to do.”