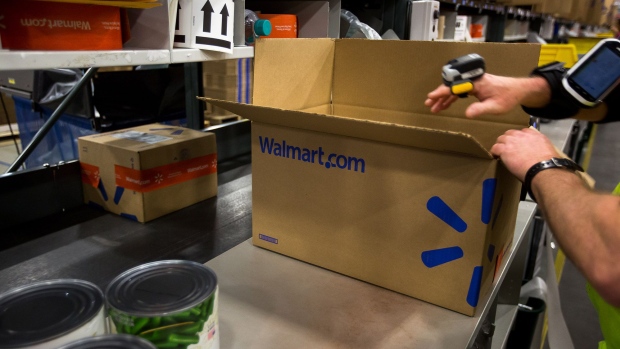 Walmart Inc. (WMT:UN), looking to generate more profit from its online unit, wants to start storing and shipping products for third-party vendors for the first time, just as rival Amazon.com Inc. (AMZN:UN) has done for years.

The world’s largest retailer is testing a fee-based service called “Fulfilled by Walmart,” U.S. e-commerce chief Marc Lore said at an industry conference this week. Lore didn’t provide details, but said the service would be an area where the e-commerce arm could generate revenue. It would allow Walmart to move more items from outside merchants, especially ones that generate wider margins.

The move could help Walmart’s U.S. e-commerce business stem losses, which Morgan Stanley estimates may reach US$1.7 billion this year, by making transportation a source of revenue rather than just an expense.

Amazon, which has operated its own “Fulfilled By Amazon” service since 2006, has found that merchants are willing to fork over fees since the e-commerce giant can often get goods to customers faster through its own distribution networks. Three out of four Amazon sellers employ fulfillment by Amazon in some capacity, according to Feedvisor, which sells advertising and pricing software used by Amazon sellers.

A Walmart spokesman didn’t immediately respond to a request to comment.

Walmart’s fulfillment service is “exactly what they should be doing,” Juozas Kaziukenas, founder of data tracker Marketplace Pulse, said.

Walmart introduced its marketplace site for third-party sellers a decade ago, and it now offers about 75 million products, compared with Amazon’s selection of more than 300 million. Like Amazon, Walmart charges a fee — typically about 15 per cent — to list the item on its site. But so far Walmart has relied on outside logistics providers to handle those orders. One of those, San Francisco-based Deliverr Inc., fulfills Walmart marketplace orders with a pledge of arriving within two days. Michael Krakaris, co-founder of Deliverr, declined to comment.

By handling fulfillment for everything from T-shirts to microwave ovens, Walmart could also reduce embarrassing incidents that occur when outside vendors hawk obscene or offensive products, like Nazi memorabilia.

Walmart’s network of cavernous warehouses and its private fleet of 6,500 trucks has prompted speculation for some time that it could start a third-party fulfillment service similar to Amazon’s. In March 2017, Chief Executive Officer Doug McMillon said he “wouldn’t rule it out,” and in June 2017 Lore said “it’s something we talk about and consider.”

In its second quarter, Amazon’s revenue from so-called “third-party seller services,” which include fulfillment fees and listing commissions, rose 23 per cent to almost US$12 billion.