Comparable sales increased 6 per cent for Walmart stores in the U.S., excluding fuel, compared with an expected 2 per cent gain, according to estimates compiled by Bloomberg.

The retailer now expects earnings per share to rise by a high single-digit percentage this year, compared to earlier estimates for a slight decline. In the second quarter, that same metric is projected to fall in the low single digits, but that’s still better than the mid-to-high single-digit drop forecast earlier.

“The second quarter has started off pretty well, a little bit better than we would have expected,” Chief Financial Officer Brett Biggs said in an interview Tuesday. “We typically don’t update guidance at end of the first quarter but given the quarter, we felt we needed to come out and be clear.” 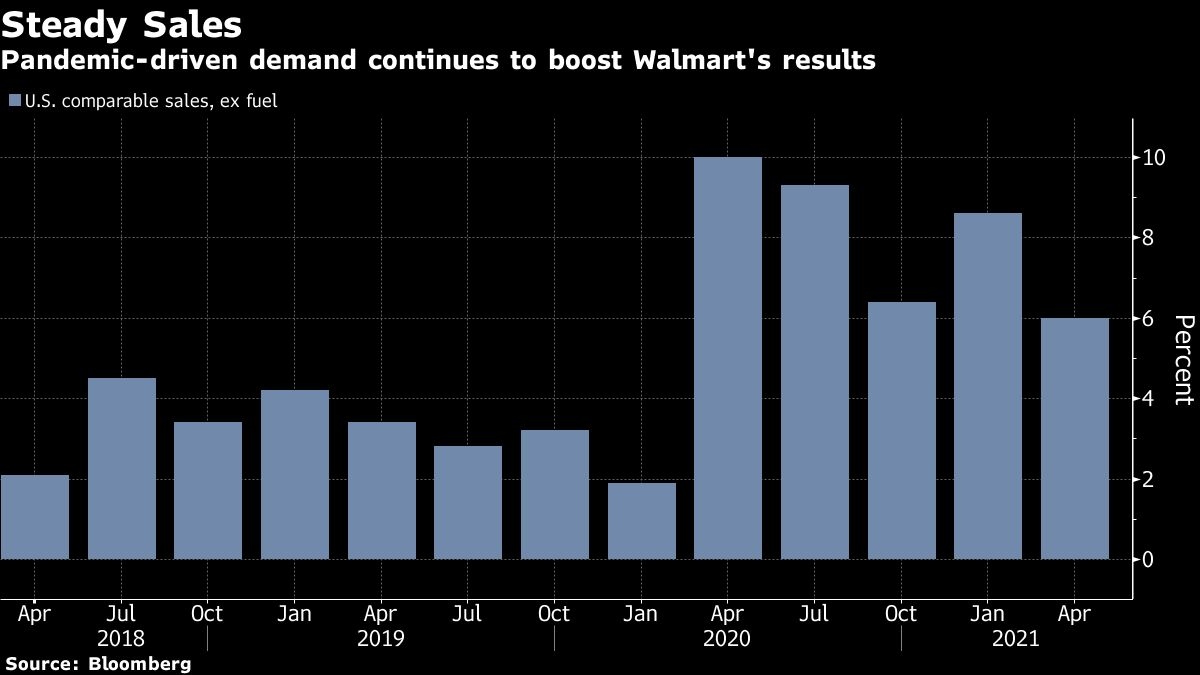 The company attributed the strong performance to U.S. stimulus checks, turning around market-share losses in its grocery unit and pent-up demand after a year in lockdown -- a trend economists have dubbed revenge spending. “In the U.S., customers clearly want to get out and shop,” Chief Executive Officer Doug McMillon said in a statement. Customer traffic in stores increased in April for the first time in more than a year.

“Americans are clearly flush with cash due to the impact of the third round of stimulus and have returned to in-store shopping,” John Tomlinson, an analyst at M Science, said by email. “As we move away from the impact of stimulus, retail trends will be very important to watch, as the second quarter was a very strong quarter for many retailers last year.”

Walmart was among the retail industry’s big winners during the pandemic and now faces the challenge of holding onto the customers it gained last year -- and finding new ones -- amid heightened competition, supply-chain congestion and the removal of the stimulus tail wind. According to a recent survey from Stifel & Co. 57 per cent of respondents said they’d already spent their government check, up from 34 per cent who said so in mid-March.

“Our slight concern is that to sustain momentum when stimulus income dries up, Walmart also needs to be attracting new shoppers,” said Neil Saunders, an analyst at GlobalData. “While this is happening to some degree, it is only doing so slowly.”

While the bulk of Covid-related expenses have subsided, Walmart and other big retailers now face rising costs for transportation and labor and need to decide how much of looming price hikes from vendors can be passed along to shoppers who will likely shift some spending away from stores and back to restaurants and travel this year. Biggs said Walmart saw some “modest food inflation” in the quarter and is placing orders with suppliers earlier to account for supply-chain bottlenecks.

Separately, Walmart is also pushing harder into new, more profitable areas like digital advertising, telehealth and financial services. Another new unit, the subscription program Walmart+, was played down by McMillon on a call with analysts. He said that with so much else going on, the membership program shouldn’t be “the primary focus at the moment.” Walmart has declined to share any information on membership or sales for Walmart+, leaving analysts to guess about its performance thus far.

In a closely watched number, Walmart’s U.S. e-commerce sales rose 37 per cent in the quarter, while analysts on average anticipated 24 per cent. Online sales have been expected to decelerate as shoppers venture back into stores, but Americans continue to favor the speed and convenience of the web. To counter rival Amazon.com Inc. and better compete online, Walmart has opened its third-party web marketplace to non-U.S. vendors and is trying to sell more apparel online by purchasing a virtual-fitting room business.

Adjusted earnings in the quarter came in above estimates. Lower Covid-related costs, which for Walmart totaled almost a billion dollars in last year’s first quarter, are helping to offset higher labor and transportation costs and price increases from vendors.

There were some clouds in the quarter: Expenses in the U.S. rose faster than sales because of spending on technology and employee wages. And Walmart was still having trouble staying in stock with certain in-demand items, like adult bikes.

But the overall picture was bright, as sales trends reflect a growing desire to get back to normal after a year on lockdown.

“We are seeing high demand in anything related to travel, and getting back to work,” Biggs said. “We laughed at one item that had high demand, which is teeth whitener, as masks are coming off.”