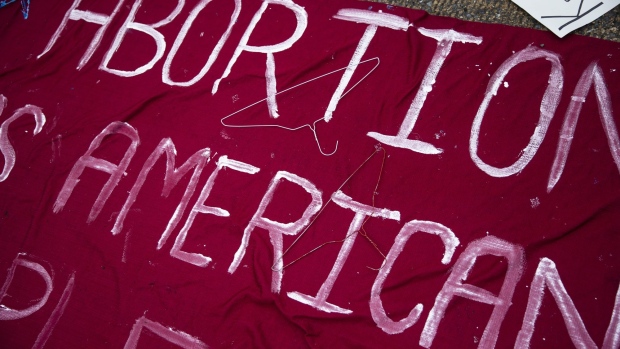 Posters outside of the Supreme Court building during a nationwide rally in support of abortion rights in Washington, D.C., US, on Saturday, May 14, 2022. Democratic states are finding themselves in uncharted territory as they set up funds to support abortion access not only for their own residents, but for those traveling from states where the procedure could be banned. Photographer: Sarah Silbiger/Bloomberg , Bloomberg

(Bloomberg) -- With the US facing increased abortion restrictions, Institutional Shareholder Services is recommending shareholders at Walmart Inc. and Lowe’s Cos. vote to require the companies report on the risks to their workforces if the Supreme Court overturns Roe v. Wade.

Walmart, Lowe’s and TJX Cos., owner of the department store TJ Maxx, each have such proposals on the docket during their upcoming shareholder meetings. ISS put out recommendations that investors at Walmart and Lowe’s vote in favor of them. Walmart is based in Arkansas, one of about a dozen states that has so-called trigger laws on the books — meaning abortion would immediately become illegal if federal protections disappeared. It also has 1.6 million employees at stores across the country. North Carolina, where Lowe’s is headquartered, would also likely see increased restrictions.

“[Given] it is anticipated that a federal protection to a right to abortion that was initially recognized in Roe v. Wade could be overturned, which would trigger abortion bans in various states, the likelihood that the company’s female workforce will be impacted has increased,” ISS, whose clients include managers of large pension plans and investment funds, said in its recommendations at both Lowe’s and Walmart. It has not yet released guidance for TJX Cos.

Lowe’s, Walmart and TJX are all recommending shareholders reject the proposals, saying they provide a supportive environment for women and comprehensive health care.

Executives are under increasing pressure from workers and investors to weigh in on social issues, but also face potential blowback from politicians who don’t like their stances. Republican lawmakers have already warned companies they would penalize them if they provided employees abortion care benefits — something over a dozen major organizations now say they offer. Conservatives are also starting to go after ESG investors for pushing left wing overreach and “corporate cancel culture.”

Read more: CEOs Feel the GOP Squeeze for Weighing In on Social IssuesThree different investment groups put forth the proposals at each of the retailers earlier this year, before a draft opinion overturning Roe leaked earlier this month. Companies have faced a record number of climate, race and other social proxy proposals this year. Even if shareholders approve them, companies can still opt to ignore the results.