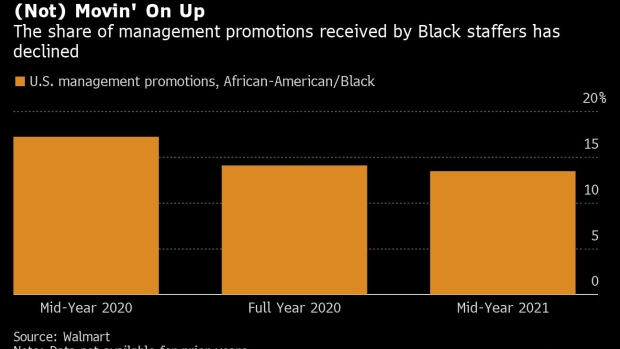 A shopper carries a bag outside a Walmart store in San Leandro, California, U.S., on Thursday, May 13, 2021. Walmart Inc. is expected to release earnings figures on May 18. Photographer: David Paul Morris/Bloomberg , Bloomberg

The nation’s biggest private employer said African American and Black employees made up 13.5% of U.S. promotions in the first half of this fiscal year, according to a midyear diversity report released Friday, down from 14.1% at the end of last year and 17.2% at the midpoint of 2020. The figure includes those elevated from hourly jobs into management, as well as managers promoted into more senior positions.

The decline illustrates the challenges Black employees continue to experience when trying to move up the corporate ladder, despite widespread pledges to address racial inequities made in the wake of George Floyd’s murder last year.

Unlike other big U.S. companies, Walmart has not announced specific targets for representation of women or minorities in its senior ranks. The retailer has set aside $100 million to create a center on racial equity and has enhanced its disclosure of diversity statistics, which now come out twice a year.

Walmart didn’t immediately respond to a request for comment.

In an internal survey late last year, some high-ranking Black managers at Walmart said career advancement is difficult at the retail chain and they wouldn’t recommend working there. A majority of those surveyed gave mediocre rankings for career satisfaction.

Despite Black employees receiving a lower proportion of promotions, the share of Walmart company officers -- those at the vice president level or above -- who identify as African American or Black rose to 9.1% from 6.9% a year ago. Black workers made up 28.7% of all new hires in the U.S., up slightly from a year ago.

Data for the share of total management promotions received by Black employees weren’t disclosed by Walmart in 2019 or prior years. Walmart also revealed that the average age of its 1.5 million-person U.S. workforce is 38 years old, but about 30% of that group is 24 or younger.