Comparable sales at U.S. Walmart stores will increase  “slightly above 3 per cent” excluding fuel during the current fiscal year, which ends in early 2023, the retailer said in a statement Thursday as it reported earnings. That tops the 2.7 per cent average gain expected by analysts.

The shares rose 4 per cent to US$138.88 at the close in New York amid a broader U.S. stock slump. It was the biggest daily gain since Sept. 1, 2020. Walmart has dramatically underperformed retail stock indexes and rivals such as Target Corp. and Costco Wholesale Corp. over the past year.

The financial results underscore Walmart’s progress in navigating scarce transportation capacity, higher wages and rising fuel costs, which are combining with robust demand to spur the fastest growth in U.S. consumer prices in four decades. The company’s gross margin, a broad measure of profitability, also surpassed analyst estimates in the fourth quarter by climbing slightly to 23.8 per cent with a boost from the sprawling U.S. business. 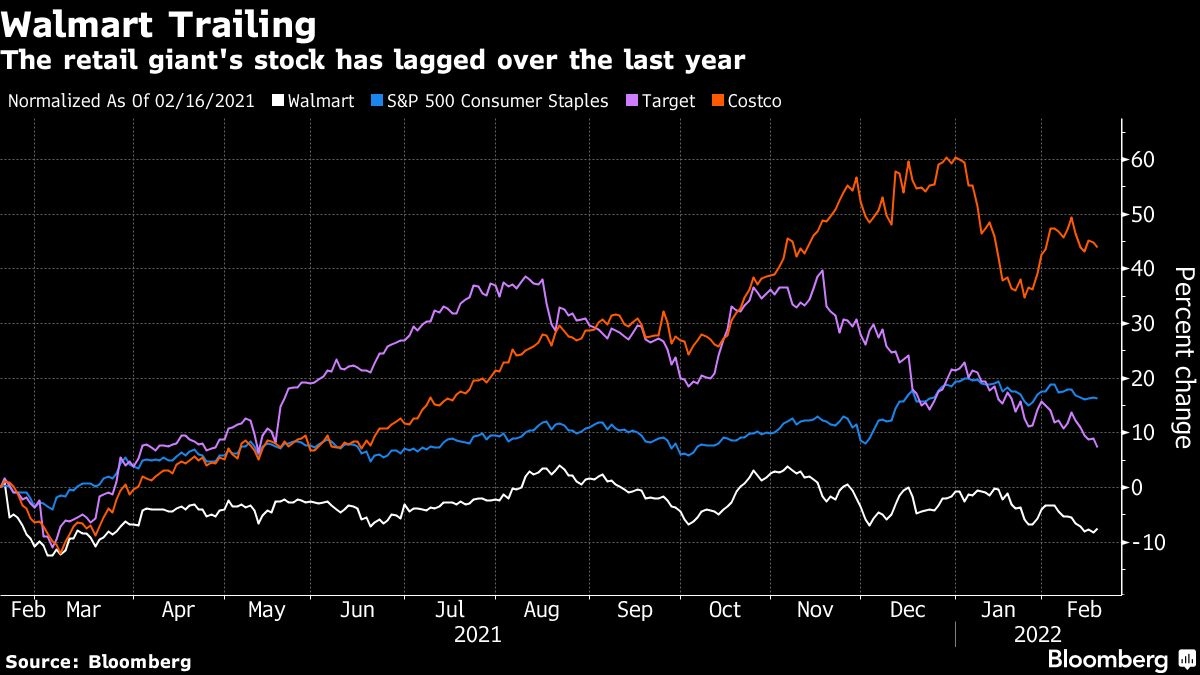 “This is the best result in three quarters,” Michael Baker, an analyst D.A. Davidson, said in regard to the U.S. operation’s gross margin improvement.

The share gain illustrates how investors are rewarding companies that can manage through rising inflation and supply-chain pressures. The results are also likely to be seen as a bellwether as other large U.S. retailers prepare to release earnings. Home Depot Inc., Macy’s Inc. and Lowe’s Cos. report next week, followed the week after by Target Corp., Costco Wholesale Corp. and Best Buy Co.

On a conference call to discuss Walmart’s earnings, Wall Street analysts pressed for details on the company’s thinking about the pressures on lower-income shoppers, who make up a key part of the retailer’s clientele. Chief Financial Officer Brett Biggs said comparable-sales growth at Walmart’s U.S. stores will slow to 1 per cent to 2 per cent in the current quarter, but the company expects U.S. consumers to remain in a “generally favorable economic position throughout the year.”

Rising inflation could actually be a positive for Walmart by luring more customers from all income levels to seek out the company’s everyday low prices. The retailer is also “finding a few places where we can roll back prices” as a further enticement, Chief Executive Officer Doug McMillon told analysts.

Sales this year will climb about 4 per cent excluding divestitures, the Bentonville, Arkansas-based retailer said. In other words, the company is standing by the long-term growth framework it laid out last year. Walmart said operating income would grow faster than revenue.

Adjusted earnings climbed to US$1.53 a share in the fiscal fourth quarter, which ended in late January. That topped the US$1.51 average of analyst estimates compiled by Bloomberg. Revenue rose 0.5 per cent to US$152.9 billion, while Wall Street had expected US$151.7 billion.

The results and outlook are “proof points that we can keep our price gaps in the range where we want to grow market share, and deliver against our top- and bottom-line growth algorithm,” McMillon said on the call.

Walmart expects gross margin to increase this year due to pricing, expectations for greater sales of more-profitable products and new business initiatives, although the company cautioned there will be variability from quarter to quarter. Biggs said he expected “some abatement of costs over the year.”

Last year, Walmart outperformed its initial forecast for such key metrics as comparable sales and adjusted per-share earnings. But higher costs for merchandise, transportation and labor pose a growing threat.

In the fourth quarter, supply-chain costs for the U.S. business were US$400 million more than expected, Walmart said. That was partially offset by “price management and mix” of merchandise, which included gains its digital advertising venture. That business, Walmart Connect, more than doubled active advertisers.

Walmart is also trying to develop businesses in financial services and health care, and it’s investing heavily in e-commerce. The company is planning capital expenditures in the current fiscal year to be at the “upper end” of 2.5 per cent to 3 per cent of net sales with a focus on supply chain, automation, customer-facing initiatives and technology. That would imply investment well above last year’s US$13 billion.

U.S. e-commerce sales, a closely watched metric, rose 1 per cent in the fourth quarter while analysts were looking for a 2.2 per cent gain. Online sales got a substantial boost during pandemic lockdowns, but demand has been slowing as shoppers venture back into stores.

That prompted analysts on the conference call to press for details on Walmart+, an online subscription offering that is widely seen as a bid to compete with Amazon.com Inc.’s Prime program. McMillon declined to reveal how many customers have signed up -- at least for now.

“It help us grow our e-commerce business, it helps us deepen the relationship with customers and have more data,” McMillon said. “At some point, we’ll probably talk about that number.”